Trump: "I Will Always Tell You the Truth" Up to 30 Percent of the Time

In his first major address since turning over the reins of his campaign to Stephen Bannon and Kellyanne Conway, Donald Trump provided two notable--if not laudable--moments. For starters, the Republican offered a blanket apology, or more accurately, an "unpology." That is, his expression of conditional regret applied only in unspecified circumstances in which "you don't choose the right words or you say the wrong thing" and when someone may have taken offense, "particularly where it may have caused personal pain." Second, Trump promised a "pivot" --away from the pathological lying that has defined his White House run:

Americans should be forgiven their skepticism. After all, the fact-checking web site Politifact evaluated the veracity of 223 Trump statements as of August 19, 2016. A staggering 157 of them (70 percent), were rated as "Mostly False", "False" or "Pants on Fire." As it turns out, Donald Trump lies more than every major candidate from either party, as Robert Mann recently showed in the chart below: 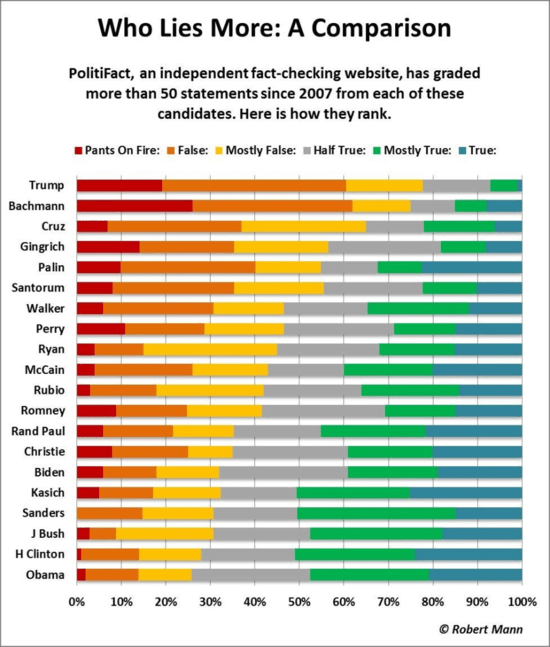 While past performance is no guarantee of future results, the lesson for voters is clear. When Donald Trump pledges, "I will always tell you the truth," he only means it about 30 percent of the time.