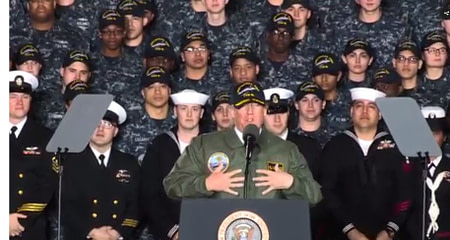 On June 4, 2014, Donald Trump as usual was apoplectic. His fury that day was ignited by word that President Obama had authorized the exchange of five Taliban prisoners for Bowe Bergdahl, the Army sergeant held captive in Afghanistan since 2009. So Trump took to Twitter to ask, "Are you allowed to impeach a president for gross incompetence?"

Ignoring the long history of prisoner exchanges that had been part of every American war since the Revolution and the difficult constitutional issues involved, South Carolina Senator Lindsey Graham certainly thought so. He warned that "there will be people on our side calling for his impeachment" if more Guantanamo detainees were released. Former Bush Attorney General and torture enthusiast Michael Mukasey agreed, proclaiming, "The president can stay within his lawful powers and still commit an impeachable offense."

But by that standard--or pretty much any other--Commander in Chief Donald Trump would be removed from office as soon as possible. With his conduct unbecoming a private, a general, or any rank in between, Trump would be dishonorably discharged for his erratic and dangerous performance.

Consider the revelations of just the past few weeks. Trump deployed U.S. forces as political props along the Mexican border; defended the Saudi regime responsible for butchering a U.S. resident on the soil of a NATO ally; and slandered the decorated commander of the 2011 raid that killed Osama bin Laden. The President has now publicly rebuked U.S. intelligence agencies for their conclusion in the Khashoggi assassination, in addition to his rejections of their assessments of Russian election interference, Iranian compliance with the 2015 P5+1 nuclear accord, and the North Korean ballistic missile program. Having unilaterally withdrawn from the Intermediate Nuclear Forces (INF) agreement with Russia, and repeatedly threatening to refuse to honor American mutual defense obligations to NATO, Trump mocked French President Emmanuel Macron for declaring Europe would have no choice but to create its own army. Meanwhile, our AWOL commander in chief--the same one who has never visited U.S. troops in Iraq or Afghanistan--skipped both an event commemorating the one hundredth anniversary of the armistice ending World War I and a Veterans Day remembrance at Arlington National Cemetery, only to deploy Kellyanne Conway to insult the intelligence of 330 million Americans:

"No president has shown greater respect for the military and the veterans."