Trump Betrays Kurds One Year After Promising "I Don't Forget" Their Sacrifices for the U.S. 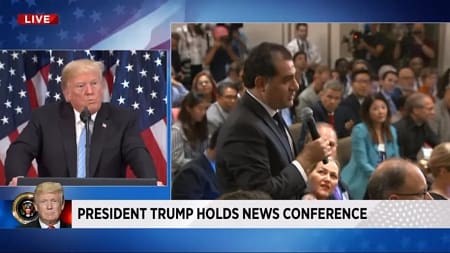 That Donald Trump betrayed America's Kurdish allies in the fight against ISIS should come as no surprise; Trump betrays everyone sooner or later. But Trump's treachery in codifying Turkey's ethnic cleansing of the Kurds across the Syrian border is different in kind and degree. After all, agreeing with President Erdogan that the Turks "had to have it 'cleaned out,'" virtually assures a body count with thousands of deaths and the relocation of hundreds of thousands more. And as it turns out, it was only about a year before saying of the Kurds "they're no angels" that President Trump promised "I don't forget" what our allies sacrificed for the United States.
Trump's guarantee to the Kurds came during a press briefing on September 27, 2018. Turning to a Kurdish reporter the President of the United States address as "Mr. Kurd," Trump offered this answer to his question, "What will be the U.S.A. relations with the Kurds -- post-ISIS."

Well, that "someday later" was October 7, 2019, when Trump greenlighted Turkey's invasion of Syria. During joint remarks on October 16 with Italian President Mattarella, Trump made crystal clear that the fate of the Kurds wasn't something we "should be losing lives over":

Syria and Turkey may fight. Syria is friendly with the Kurds. The Kurds are very well protected; plus, they know how to fight. And, by the way, they're no angels, but they were with us. They are no angels. But they are fighting. We are largely out of that area. We're very well set. We have quite a contingent, right nearby, of soldiers and of the finest equipment in the world. I don't think we'll have to use it...
Now, as to Syria wanting to take back their land, that's a whole different story. If Syria wants to fight for their land, that's up to Turkey and Syria, as it has been for hundreds of years, they've been fighting. And the Kurds have been fighting for hundreds of years -- that whole mess. It's been going along for a long time.
Syria may have some help with Russia, and that's fine. It's a lot of sand. They've got a lot of sand over there. So there's a lot of sand that they can play with.

The 45th President wasn't content to declare the Kurdish territories "land that has nothing to do with us." On Wednesday, he used Turkish talking points to slander the fighters who helped defeat ISIS as well:
Continue reading at Daily Kos.