Donald and the Debt Ceiling Suckers

"Reagan," Vice President Dick Cheney said in 2002, "proved deficits don't matter." Unless, Cheney felt no need to mention, the occupant of the Oval Office is a Democrat. After all, Ronald Reagan had tripled the national debt in 8 short years and George W. Bush had nearly doubled it again by the time he ambled out of office on January 20, 2009.
But when Barack Obama took the oath of office during the worst American economic crisis since the Great Depression, Uncle Sam's annual budget deficits and the cumulative national debt suddenly mattered to Republicans a great deal. After both parties had routinely raised the debt ceiling 40 times between 1980 and 2010, Congressional Republicans demanded draconian spending cuts as a condition of increasing the federal government's ability to borrow more money for expenses it had already incurred. Despite Speaker John Boehner's warning that failure to hike the debt ceiling "would be a financial disaster, not only for our country but for the worldwide economy," his House Republicans nearly did just that. Just the possibility of the previously unimaginable nightmare of a sovereign default by the United States triggered plummeting consumer confidence and job creation numbers. It's no wonder rating agency S&P summed up its Tea Party downgrade with this red alert:

"That a country even has such voices, albeit a minority, is something notable. This kind of rhetoric is not common amongst AAA sovereigns."

But now, that minority will control Congress and the White House, too. And with President-elect Donald Trump, like Reagan and Bush before him, promising to dramatically reduce taxes, increase defense spending and balance the budget, those supposed Republican deficit hawks and default deniers are singing a different tune. Debt ceiling not high enough? No problem. 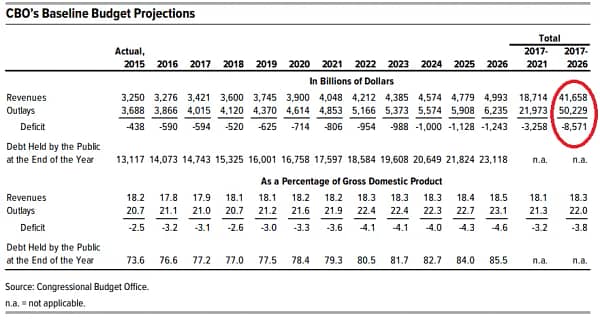 Republican leaders are also eager to de-link the need to increase the debt ceiling from funding the government. Privately, House Republicans say that with Trump in control of the Treasury Department next year, they will not have to worry about government funding and debt ceiling deadlines colliding, as Obama repeatedly faced...The Trump administration can use "extraordinary measures," as the Obama administration did, to extend the debt-ceiling deadline for months, possibly until the fall. That would give Trump and GOP congressional leaders time to work out a spending deal without a debt crisis hanging over their heads.
Congress voted in the fall of 2015 to "suspend" the debt ceiling - currently at about $20 trillion - until March 2017.
"It will be Trump's Treasury now, we won't have to worry about that," said a House GOP aide close to the issue. "We can control that."

It will be "Trump's Treasury," all right, and one which despite years of Republican tough talk will have to raise the debt ceiling repeatedly. 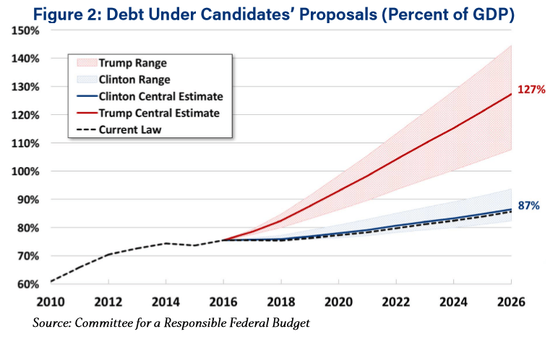 On top of the current $20 trillion in debt, the nonpartisan Congressional Budget Office (CBO) forecast an additional $8.5 trillion in accumulated deficits between 2017 and 2016. Whether he sticks to his tax plan or opts for Paul Ryan's "Better Way" blueprint to deliver a massive windfall for the wealthy, President Trump's Treasury will hemorrhage another $6 trillion. Ignoring for the moment his pledges to raise defense spending while protecting Social Security and Medicare from any cuts, Trump is on a path to generate $15 trillion more in new debt for a total of $35 trillion over the next decade. Nevertheless, candidate Trump promised to eliminate the entire national debt "fairly quickly." Just how quickly"?

"Well, I would say over a period of eight years."

It is no exaggeration to say Trump's is a formula for national suicide. Cutting roughly 70 percent of total federal spending (currently forecast at $50.2 trillion through 2026), which necessarily result in a recession dwarfing the financial collapse which started in late 2007. Regardless, the scenario is a hypothetical one. Most of each year's federal spending ($2.6 trillion out of $3.7 trillion) is mandatory' outlays for Medicare, Medicaid, Social Security, interest on the national debt are required by legislation. And non-defense discretionary spending is already at its smallest percentage of the U.S. economy since the 1950's.
But in one sense, the Republicans now willing to calmly give Donald Trump what they only delivered to Barack Obama after repeated extortion threats are right. Raising the debt ceiling should be a routine, bipartisan act (or eliminated altogether). Among the many reasons is simply because, as both Paul Ryan and John Boehner quietly admitted in 2013, "we have no immediate debt crisis." As Paul Krugman explained in October, "right now we have a more or less stable ratio of debt to GDP, and no hint of a financing problem." As the Center on Budget and Policy Priorities (CBPP) documented, projections of America's debt-to-GDP ratio have plummeted by more than between 2010 and 2016. Much-lower interest-rates combined with much slower than forecast increases in Medicare spending account for much of the difference.

As did President Obama. Contrary to Republican mythology, after accounting for inflation federal spending has actually declined since Obama first took the oath of office. Annual budget deficits have been halved from the $1.2 trillion a year President Bush bequeathed eight years ago. As a percentage of gross domestic product, federal spending is under 21 percent and tax revenue around 18 percent. Those just happen to be the targets set by the Simpson-Bowles commission that Paul Ryan and his Republican panel members voted against. The reason? The upper income tax increases that played a key role in narrowing the deficits.
Despite all this, conservatives tout polls with findings like "61% of Americans Oppose Debt Limit Hike or Want It Tied to Spending Cuts." As I documented previously, in 2011 and 2013 GOP disinformation convinced majorities of Americans that Congress should not raise the debt ceiling despite warnings from some of the hostage-takers like Lindsey Graham that not doing so would mean "financial collapse and calamity throughout the world." After his brinksmanship helped produce the 2011 Budget Control Act (and with it, budget "sequestration"), Mitch McConnell bragged about his debt ceiling blackmail, "It's a hostage that's worth ransoming." Or in "King of Debt" Donald Trump's case, one not worth worrying about at all. As he put it this spring:

"I would borrow, knowing that if the economy crashed, you could make a deal. And if the economy was good, it was good. So, therefore, you can't lose."

Of course, that's not how the national debt works. "No one on the other side would pick up the phone if the secretary of the U.S. Treasury tried to make that call," said Lou Crandall, chief economist at Wrightson ICAP. "Why should they? They have a contract" requiring payment in full.
Meanwhile, back in Washington, Republicans will continue to play their make-believe game of fiscal discipline. Politico certainly fell for it--hard--by proclaiming "It's never been easy for House Republicans to raise the debt limit." That was just a repackaging of GOP talking points from the likes of Texas Rep. Jeb Hensarling, who declared that hiking the debt ceiling is "contrary to our DNA." Or as former House Majority Leader Eric Cantor put it:

"I don't think the White House understands is how difficult it is for fiscal conservatives to say they're going to vote for a debt ceiling increase."

Unless, of course, a Republican like Ronald Reagan, George W. Bush or Donald Trump is in the White House.