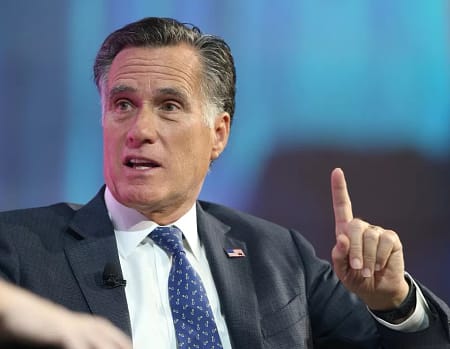 Mitt Romney has never missed an opportunity to be an opportunist. Romney the leveraged buyout pioneer took advantage of the U.S. tax code to pocket tens of millions of dollars from investments in companies that failed. Mitt the mythical Massachusetts moderate transformed himself into the "severely conservative" 2012 presidential nominee by turning his back on his own health care reforms and confirming that he was "a pro-life Mormon faking it as a pro-choice friendly," as his adviser Mike Murphy said in 2006. That last reinvention required then-Gov. Romney to betray a woman he had previously revealed to voters was a "dear family relative."
Now, with growing public support for the impeachment and removal of President Donald Trump, Utah Republican Sen. Mitt Romney is seizing a new chance to place himself on the national stage. While Trump is being buffeted by the blowback from his illegal solicitation of 2020 election assistance from Ukraine and his grotesque scheme to extort the government in Kyiv, Romney is waging a public relations campaign to claim the mantle of the conscience of the GOP. With furrowed brow and pained expressions of concern, Mitt, to great media acclaim, declares himself "deeply troubled" by Trump's "appalling" behavior. Yes, Mitt Romney is once again offering himself as the white knight Republicans can turn to to replace their vulgarian in the White House.
While Romney's criticism of the lawless occupant of the Oval Office is certainly welcome, it does not go nearly far enough. Mitt Romney, of all Republicans--of all Americans--has a special responsibility to immediately demand and take a prominent role in leading the impeachment inquiry into Donald Trump. There should be no mystery as to why. After all, when he accused the president of believing "the best interests of America are to bow to the interests of Russia" and of sympathizing with those who waged terrorist attacks against Americans, Romney wasn't talking about Trump, but about Barack Obama. In penance for his baseless slanders of the 44th president of the United States, Mitt Romney must publicly take the lead in removing the 45th from office.
Continue reading at Daily Kos.