America in Black and White in Alabama 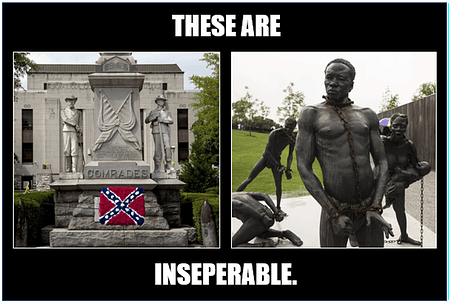 In an age of "both sides do it" and "teach the debate," some issues are simply black and white. So it was this week in Alabama, where truth and myth, hate and hagiography collided in two stories of the ongoing legacy of the Civil War and white supremacy. On Monday, the "Heart of Dixie" celebrated "Confederate Memorial Day," a holiday whose origins unsurprisingly date back to 1866. But while Alabama state offices and courts closed on the 23rd to honor the Confederacy's fallen soldiers and their "Lost Cause," just three days later the Legacy Museum and National Memorial for Peace and Justice opened its doors in Montgomery. There, visitors were presented with the stark reality of the South's decades of racial lynching at a location just a few blocks from the expansive Montgomery slave market those Confederate dead fought to preserve.
While Confederate Memorial Day is part of the sinister, 153-year effort "to rewrite history to hide the truth, which is that the Confederacy was on the wrong side of humanity," the non-profit Equal Justice Initiative has documented 4,400 of the thousands of lynchings of African Americans across the South which followed its fall. No patriotic American worthy of that name can look away from horrifying truths like these. As the New York Times described just a few:

The magnitude of the killing is harrowing, all the more so when paired with the circumstances of individual lynchings, some described in brief summaries along the walk: Parks Banks, lynched in Mississippi in 1922 for carrying a photograph of a white woman; Caleb Gadly, hanged in Kentucky in 1894 for 'walking behind the wife of his white employer'; Mary Turner, who after denouncing her husband's lynching by a rampaging white mob, was hung upside down, burned and then sliced open so that her unborn child fell to the ground.

And what noble cause and lofty principles inspired this bestial, bloodthirsty cruelty? Why were Dangerfield Newby's ears cut off as trophies after John Brown's Harpers Ferry raid of 1859, as were the ears, nose, and genitals of Sam Hose during his torture and dismemberment in 1899? Why did Confederate General Nathan Bedford Forrest butcher hundreds of surrendering black Union troops at Fort Pillow in 1864 and white militiamen slaughter 100 African-Americans in Colfax, Louisiana, who were merely trying to safeguard the results of the local elections there in 1873? As Jane Coaston recently explained ("Confederate Memorial Day: when multiple states celebrate treason in defense of slavery"), Alabama Confederates like Stephen F. Hale made no secret of the obvious in December 1860:

What Southern man, be he slave-holder or non-slave-holder, can without indignation and horror contemplate the triumph of negro equality, and see his own sons and daughters in the not distant future associating with free negroes upon terms of political and social equality, and the white man stripped by the heaven-daring hand of fanaticism of that title to superiority over the black race which God himself has bestowed?