An American President Paid a Ransom to Iran, But It Wasn't Barack Obama

And now for some friendly advice for my Republican friends. If you want to criticize President Obama on anything having to do with Iran, don't waste your energy seething about "Iran" and "ransom" and "hostages" and what Ronald Reagan would do. It won't end well for you. After all, it wasn't Reagan's inauguration that secured the released of 52 Americans held captive in Tehran, but months of negotiations by the Carter administration. And as it turned out during the Iran-Contra scandal, the American President who actually paid a "ransom" and "negotiated with terrorists" was none other than St. Ronnie himself. 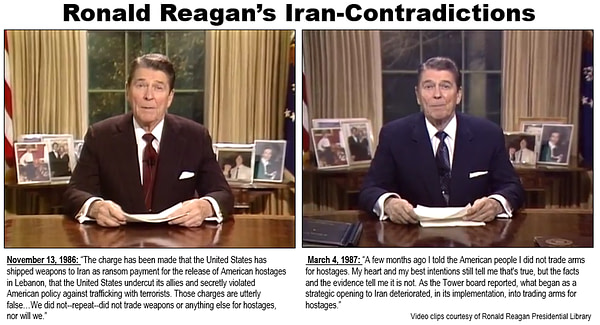 Iran-Contra, as you'll recall, almost laid waste to the Reagan presidency. Desperate to free U.S. hostages held by Iranian proxies in Lebanon, President Reagan provided weapons Tehran badly needed in its long war with Saddam Hussein (who, of course, was backed by the United States). In a clumsy and illegal attempt to skirt U.S. law, the proceeds of those sales were then funneled to the Contras fighting the Sandinistas in Nicaragua. As the New York Times recalled, Reagan's fiasco started with an emissary bearing gifts from the Gipper himself:

A retired Central Intelligence Agency official has confirmed to the Senate Intelligence Committee that on the secret mission to Teheran last May, Robert C. McFarlane and his party carried a Bible with a handwritten verse from President Reagan for Iranian leaders.
According to a person who has read the committee's draft report, the retired C.I.A. official, George W. Cave, an Iran expert who was part of the mission, said the group had 10 falsified passports, believed to be Irish, and a key-shaped cake to symbolize the anticipated ''opening'' to Iran.

As his diaries published in 2005 show, President Ronald Reagan was under no illusions about either the illegality of the scheme or that it constituted anything other than a swap of arms for hostages. On Thursday, December 5, 1985, Reagan wrote in his diary:

N.S.C. briefing--probably Bud's last. Subject was our undercover effort to free our 5 hostages held by terrorists in Lebanon. It is a complex undertaking with only a few of us in on it. I won't even write in the diary what we're up to.

Nevertheless, just two days later the Gipper wrote about that very topic. On Saturday, December 7, Reagan noted in his diary:

Day opened with "Rex" (our new dog) on our bed. I then had a meeting with Don R., Cap W. and Bud M., John P., Geo. Schultz and Mahan of C.I.A. This had to do with the complex plan which could return our 5 hostages & help some officials in Iran who want to turn that country from its present course & on to a better relationship with us. It calls for Israel selling some weapons to Iran. As they are delivered in installments by air our hostages will be released. The weapons will go to the moderate leaders in the army who are essential if there is to be a change to a more stable govt. We then sell Israel replacements for the delivered weapons. None of this is a gift--the Iranians pay cash for the weapons--so does Israel.
George S. Cap and Don are opposed--Cong. has imposed a law that we can't sell Iran weapons or sell any other country weapons for resale to Iran. Geo. also thinks this violates our policy of not paying off terrorists. I claim the weapons are for those who want to change the govt of Iran & no ransom is being pd. for the hostages. No direct sale would be made by us to Iran but we would be replacing the weapons sold by Israel.

In case there was any doubt that Ronald Reagan blessed the delivery of hundreds of advanced anti-tank weapons to Tehran, the President himself removed it with his January 17, 1986 diary entry, "I agreed to sell TOWs to Iran."
Of course, that's not what President Reagan told the nation. At least, not at first. As revelations about the weapons shipments to Tehran began to surface, on November 13 1986, Reagan took to the airwaves to address the American people--and lie to their faces:

The charge has been made that the United States has shipped weapons to Iran as ransom payment for the release of American hostages in Lebanon, that the United States undercut its allies and secretly violated American policy against trafficking with terrorists. Those charges are utterly false. The United States has not made concessions to those who hold our people captive in Lebanon. And we will not. The United States has not swapped boatloads or planeloads of American weapons for the return of American hostages. And we will not...
To summarize: Our government has a firm policy not to capitulate to terrorist demands. That no concessions policy remains in force, in spite of the wildly speculative and false stories about arms for hostages and alleged ransom payments. We did not -- repeat -- did not trade weapons or anything else for hostages, nor will we.

But less than six months later, The Gipper was forced to rewrite his historical revisionism. As President Reagan told the American people in a nationally televised address on March 4, 1987:

"A few months ago I told the American people I did not trade arms for hostages. My heart and my best intentions still tell me that's true, but the facts and the evidence tell me it is not. As the Tower board reported, what began as a strategic opening to Iran deteriorated, in its implementation, into trading arms for hostages."

Of course, the pathetic saga didn't end there. Then Lt. Colonel and now Fox News commentator Oliver North saw his Iran-Contra conviction overturned by an appellate court led by faithful Republican partisan and later Iraq WMD commissioner Laurence Silberman. And in December 1992, outgoing President George H.W. Bush offered Christmas pardons to Defense Secretary Caspar Weinberger and five other Iran-Contra scandal figures. Among them were John Poindexter and Elliott Abrams, men who eight years later reprised their roles in the administration of George W. Bush. As it turns out, Abrams--one of the people who brought you the Iraq War--also served as an adviser for Mitt Romney during the 2012 presidential campaign. In that capacity, he argued that Congress should give President Obama an authorization to use force against Iran for a preventive war to destroy Tehran's nuclear program. During the 2016 campaign, he advised both Marco Rubio (R-FL) and Ted Cruz (R-TX). And Michael Ledeen, the man who helped set up the weapons triangle between the U.S., Israel and Iran, is now touting the book he co-wrote with Trump water carrier General Michael Flynn.
Now, many of the same cast of characters have resurfaced to accuse President Obama of paying a $400 million ransom in exchange for the January release of four American hostages held by Tehran. But the discussions for the U.S. to repay the money received in 1979 for weapons never delivered to Iran have been conducted under the rubric of the Algiers agreement that released the embassy hostages in 1981. (The status of billions of dollars in frozen Iranian assets as well as claims by the hostages and other Americans against the regime in Tehran has been negotiated at The Hague since then.) As even North acknowledged on Fox News this week, Iran had asked for the money to be returned as far back as 1979. Nevertheless, Colonel North accused the Obama administration of "bending over backwards to support the Iranian regime."
North, of course, has that part all wrong. The guy doing the bending over was his old boss, Ronald Reagan.