As CBO Predicted, Higher Taxes Not Hurting Spending by the Rich

As the nation teetered on the edge of the so-called "fiscal cliff" in late 2012, Republican leaders warned that higher taxes for the rich would crush "job creators" and derail the U.S. economic recovery. But according to a new survey, a majority of those earning over $500,000 a year report that the new higher rates on income and capital gains have not impacted their spending, charitable giving or investment strategies. As it turns out, the Chicken Little conservatives could have spared themselves this embarrassment had they just heeded the lessons of American history and the predictions of the Congressional Budget Office. 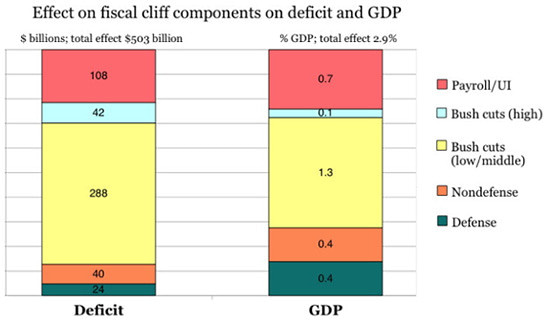 Last fall, the nonpartisan CBO forecast the impact of "going over the fiscal cliff." As the chart above shows, CBO warned that the combination of the expiring Bush tax cuts for all Americans, the end of the temporary payroll tax holiday and the steep budget cuts of the sequester could catapult unemployment to 9.1 percent while slashing gross domestic product by 2.9 percent in 2013. But ending the Bush tax cuts for households earning over $250,000 a year, the agency assured lawmakers, would have virtually no impact (the 0.1 percent of GDP in light blue above) on the U.S. economy at all.
As CNBC reported on Wednesday, the CBO appears to have had it exactly right--at least so far. The GOP's dire predictions that upper-income Americans would "would spend less, invest less and give less to charity" have not come to pass:

Of course, it's still early in the year. It's possible some of the well-to-do (that is, households earning over $450,000 a year) have not yet adjusted to the fiscal cliff deal that raised their income tax rate to 39.6 percent (from 35) and capital gains and dividend tax rate to 20 percent (from 15) in addition to the surcharges from the Affordable Care Act.
Possible, but unlikely. As the decades of U.S. history show, the American economy grew faster and produced more jobs when upper-class tax rates were higher--even much higher--than today. And as the data also show, lower capitals gains tax rates don't fuel greater investment, but instead greater income inequality.
And right now, income inequality is at record highs. For the wealthiest Americans, the recession was a blip. Their steep losses have already been erased by the doubling of the stock market over the past four years. As a recent analysis by University of California Professor Thomas Saez revealed, between 2009 and 2011 the top one percent saw their incomes rise by 11 percent, even as the other 99 percent continued to lose ground. To put it another way, during that period the gilded class more than captured all of the income gains.
But despite having once again been mugged by reality, Republicans won't be changing their talking points any time soon. After all, when the Congressional Research Service last fall published an analysis which found no correlation between top tax rates and economic growth, Senate Republicans demanded its retraction. And as it turns out, this spring's continuing budget resolution contained a little noticed GOP amendment asking the CBO to use so-called "dynamic scoring" which assumes that tax cuts will pay for at least part of their cost by generating more economic activity.
Republicans, who have accused the agency of "budget gimmickry" or called for its outright elimination, are demanding these changes not because the Congressional Budget Office got it wrong, but precisely because the CBO got it right.