There is little question that President Obama will address the Affordable Care Act in his 2014 State of the Union address. Given its troubled rollout and the neverending Republican effort to sabotage his signature domestic policy achievement, silence on Obamacare isn't an option. Nor should it be. After all, with as many 13.5 million Americans enjoying new health insurance coverage, recent polling shows the ACA is regaining the public approval lost in October and November. Better still, a new analysis from the Brookings Institution suggests that Obamacare will help alleviate the nation's record high income inequality, a theme expected to run throughout Tuesday's State of the Union speech.
Nevertheless, with its article "State of the Union 2014: The search for a non-awkward Obamacare shout-out," Politico has come through with its usual mix of conventional wisdom and selective amnesia:

This time, President Barack Obama is going to have to actually talk about Obamacare in his State of the Union address.
No more touch-the-base-and-keep-running treatments, the way he's handled it the past couple of years. This time, he'll be expected to linger on base a bit, at least long enough to acknowledge the launch of the biggest domestic achievement of his presidency -- and do it in the least awkward way possible.

Left unmentioned is that Obama could instead choose to follow the cowardly example of his predecessor, George W. Bush. After all, in his 2006 State of the Union, President Bush ran away from the challenges facing the disastrous launch of Medicare Part D prescription drug program by never mentioning it all. 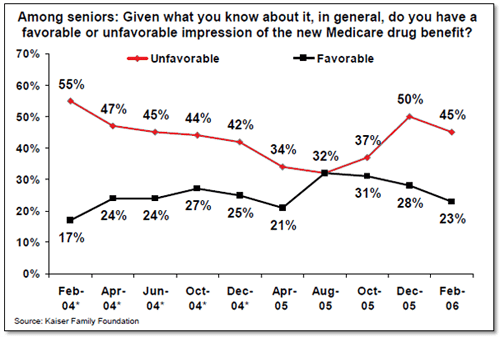 In his 2004 SOTU, President Bush spent five paragraphs touting his new prescription plan for 43 million seniors became law the previous December. But the next year, Bush's annual update to the American people didn't include the words "Medicare" or "prescription" or "drug" (not followed by "trafficking'). And on January 31, 2006, even as millions of elderly had lost their drug coverage and millions more were struggling to get their prescriptions filled, President George W. Bush said nothing the Medicare Rx plan he once boasted about.
Why did Dubya go full-ostrich and bury his head in the sand over his Medicare drug program? As I've explained elsewhere:

The nonpartisan Government Accountability Office (GAO) ruled that some of the administration's ads promoting the new program were illegal while others were misleading. GAO investigators also found that the White House illegally withheld data from Congress on the cost of the new law. The Congressman who crafted the bill soon left Capitol Hill for K Street, where he made millions of dollars annually as a heath care lobbyist.
The new federal web site allowing people to compare plans and prices was delayed by weeks, while just 300 customer service reps manned the phones to help new enrollees. Yet over six million people immediately lost their coverage, while hundreds of thousands more would be refused treatment because of malfunctions in the computer systems linking providers and insurers. In response to the mushrooming crisis, governors in mostly Democratic states spent billions to continue coverage for their residents, while the President pleaded with insurance companies not to cut off their current policyholders. Nevertheless, the White House sided with insurers and rejected bipartisan calls to delay the enrollment deadline even as public approval plummeted to 25 percent. It's no wonder John Boehner called the rollout of the President's signature domestic policy achievement "horrendous."

But despite its catastrophic rollout, President Bush's Medicare prescription drug plan slowly but surely gained popularity over time. Despite having been less popular than Obamacare is now, Medicare Part D now enjoys 90 percent support among seniors. One key reason is that, despite their opposition to a program that was needlessly expensive and a giveaway to private insurers and pharmaceutical companies, Democrats on Capitol Hill and in the states helped make the program a success. Part D also had two other things going for it. For beneficiaries, it was voluntary and free. And it was better than the alternative: nothing.
Yet nothing is exactly what President Bush said about his signature domestic policy achievement in his 2006 State of the Union address. Apparently, he couldn't find a "non-awkward shout-out" for it.