CBO: GOP Health Care "Plans" May Not Count as "Insurance"

There is total chaos in the House of Representatives today as Speaker Paul Ryan rushes to jam through a version--any version--of his so-called American Health Care Act. The timing and the ever-changing content of the bill have little to do with health care for the American people and everything to do with political spite. Ryan wants to pass a bill by midnight Thursday in order to humiliate President Obama on the 7th anniversary of his signing of the Affordable Care Act.
But in their mad scramble to take health insurance away from 24 million people over the next decade (at last count), Speaker Ryan, President Trump and their GOP allies may have made yet another mistake. By gutting Obamacare's list of "essential health benefits" to win over the extremists of the House Freedom Caucus, Ryan's GOP health care "plans" may no longer meet the nonpartisan Congressional Budget Office definition of "insurance." 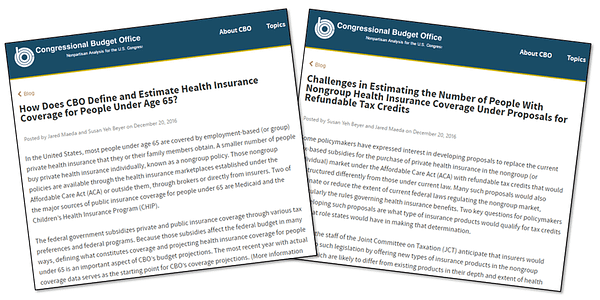 As Vox and The Hill among others have reported, Republicans are trying to reduce premiums by eliminating the ACA's list of 10 mandated benefits insurers must provide. These provisions regarding prescription drug coverage, hospitalization, out-patient treatment, mental health care, pregnancy and maternity care and much more not only set a baseline for insurance offerings under Obamacare, but also help spread the risk for insurers across a much larger pool of policyholders. And that, CBO warned Obamacare repealers in December, is a big problem as far as the agency is concerned:

For their part, CBO and the Joint Committee on Taxation (JCT) warned of the challenges they "would face in estimating the number of people who would purchase coverage in the nongroup market, and the scope of that coverage, under such proposals." Larry Leavitt of the Kaiser Family Foundation helped explain why. Under the new GOP rules, insurers would doubtless create new plans under which premiums would come down.

But on the flip side, he wrote, insurance plans could become very skimpy, because insurers would be wary of offering generous plans and attracting only sick, costly people who were willing to pay more for them.
"With no benefit requirements, insurance policies could get quite skimpy. No insurer wants to be the one most attractive to sick people," he wrote.
"With no required benefits, some (like mental health or maternity) would be very expensive because only people who need them would buy them," he added.

To predict the results, you only need to go back to the future.

As of this writing, it's unclear whether Paul Ryan's gambit will secure enough votes to pass the House. Even if it does, Senate moderates and Senate rules might still prevent this revised American Health Care Act from reaching President Trump's desk. But if it does, millions of Americans will lose health care coverage. Millions more will end up buying something that may or may not keep them physically, mentally and financially healthy. But however those plans are ultimately defined, the Congressional Budget Office warns, they can't be called "insurance."