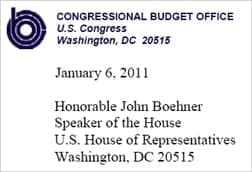 Today is shaping up as a very bad day for the quixotic GOP effort to repeal the 2010 health care reform law. Even as the number two House Republican Eric Cantor was telling the CBS Early Show that the Affordable Care Act is full of "budget gimmickry" that "costs over $1 trillion," the Congressional Budget Office was making a liar out of him. As the new CBO analysis revealed, the GOP's repeal effort wouldn't merely deny health care coverage to 32 million Americans, over the next decade Republicans would add a staggering $230 billion to the national debt.
As ThinkProgress summed up the findings from the CBO, the GOP's H.R. 2, the Repealing the Job-Killing Health Care Law Act would not only lead to higher out of pocket costs, reduced benefits and saddle employers with higher premiums. Over the next 10 years and beyond, budget-busting Republicans if successful would unleash a flood of red ink:

"Consequently, over the 2012-2021 period, the effect of H.R. 2 on federal deficits as a result of changes in direct spending and revenues is likely to be an increase in the vicinity of $230 billion, plus or minus the effects of technical and economic changes to CBO's and JCT's projections for that period..."

"Correspondingly, CBO estimates that enacting H.R. 2 would increase federal deficits in the decade after 2019 by an amount that is in a broad range around one-half percent of GDP, plus or minus the effects of technical and economic changes that CBO and JCT will include in the forthcoming estimate. For the decade beginning after 2021, the effect of H.R. 2 on federal deficits as a share of the economy would probably be somewhat larger."

For his part, Rep. Cantor remains unencumbered - and undeterred - by the truth.
On Wednesday, Cantor tried to brush off the CBO's inconvenient truth. "About the budget implications, I think most people understand that the CBO did the job it was asked to do by the then-Democrat majority, and it was really comparing apples to oranges," Cantor said. "It talked about 10 years' worth of tax hikes and six years' worth of benefits. Everyone knows beyond the 10-year window, this bill has the potential to bankrupt this federal government as well as the states." Today, as CBS reported, he doubled down:

Cantor also disputed the claim, put forth by the nonpartisan Congressional Budget Office, that the health care reform bill passed by Congress last year will actually reduce the deficit by $143 billion, calling the figure "budget gimmickry."

"I think what we do know is the health care bill costs over $1 trillion," Cantor told Hill. "And we know it was full of budget gimmickry. And it spends money we don't have in this country."

Even before the CBO published its latest report pulling the rug out from under the Republicans' bogus budget claims, Ezra Klein of the Washington Post responded, "Repealing health-care reform would cost hundreds of billions of dollars -- and Eric Cantor knows it."

Republicans are aware that this looks, well, horrible. So they're trying to explain why their decision to lift the rule requiring fiscal responsibility is actually fiscally responsible...

What's important about Cantor's argument is not that he's wrong. It's why he's saying something he knows to be wrong. There are plenty of reasons to oppose the health-care reform bill. You might not want to spend that money insuring people, or you might not think the legislation goes far enough in reforming the system. But as a matter of arithmetic, using the math that Congress always uses, the bill saves money. It cuts enough spending and raises enough taxes to more than pay for itself, both in the first 10 years and in the second 10 years.

But Cantor and the GOP know full well that the bill is unpopular largely because people think it increases the deficit. Polls have shown that only 15 percent of Americans know that CBO said it will reduce the deficit. If, in the repeal fight, it becomes widely understood that the bill reduces the deficit, it will become more popular. So it's crucial, as the repeal effort goes forward, for Republicans to become much more brazen in falsely asserting that the bill doesn't really reduce the deficit, and that even if the CBO does say it reduces the deficit, that they're saying that because they've been tricked somehow. But CBO wasn't tricked. If it were, Cantor, who has a staff dedicated to figuring these things out, would have a better argument than the one he's offering.

Which is exactly right. As the CBO report makes clear, the Republican repeal campaign is unhealthy for Americans - and the truth.