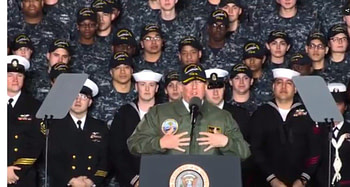 "The President shall be Commander in Chief of the Army and Navy of the United States." With that phrase, Article II, Section 2 of the Constitution of the United States ensures civilian control over--and accountability for--the American military. While the power to declare war rests with Congress, responsibility for America's global vision, its foreign policy and national security objectives, the military strategies to achieve them, the operational plans they entail and, most solemn of all, putting the lives of servicemen and women in harm's way, rest with the president alone.
But what if the occupant of the White House fails to fulfill his constitutionally-mandated role as commander in chief? How would U.S. allies and enemies alike react to the strategic confusion and policy-making void left by the president's abdication of his or her most important job? What should the American people believe--what should their 1.5 million soldiers, sailors, airmen, and marines do--when the Pentagon's mission is a mystery?
Sadly, these questions are not hypothetical. As his decision this week to delegate Afghanistan strategy and force levels to the secretary of defense once again showed, commander in chief Donald Trump is absent without leave.
As the New York Times and the Washington Post reported this week, President Trump announced this week that when it comes to America's 16-year-old war in Afghanistan, the buck stops at the Pentagon.

President Trump's decision to delegate authority to the Pentagon to set troop levels in Afghanistan has raised concerns that a few thousand additional troops expected to deploy soon could be just the beginning of a new surge in the country after 15 years of war.
Defense Secretary Jim Mattis assured lawmakers Wednesday that a large increase in deployed forced will not happen, but some experts and former battlefield commanders warned the White House and Congress should be careful not to give the Pentagon a blank check.

Those experts are right to be worried.