During the run-up to the passage of the "Republican Tax Cuts and Jobs Act" late last year, one technical paper from the Treasury Department's Office of Tax Analysis suddenly went missing. Why "Distributing the Corporate Income Tax: Revised U.S. Treasury Methodology" alone among the office's four-decade online archive of reports and analyses disappeared in September 2017 was never a mystery. The May 2012 update to a 2008 Bush administration assessment concluded that 82 percent of the benefits of a corporate tax cut would go to capital and only 18 percent to labor. That forecast wasn't just a damning indictment of the $1 trillion corporate tax cut from 35 to 21 percent at the heart of the GOP's $1.5 trillion, 10-year plan. That predicted windfall for wealthy shareholders also made a mockery of the comical claims by Trump administration mouthpieces like Treasury Secretary Steven Mnuchin that workers would win big:

On Fox News, Mnuchin claimed that "most economists believe that over 70 percent of corporate taxes are paid for by the workers." At an event in Kentucky, he declared that "over 80 percent of business taxes is borne by the worker."

Mnuchin's tall tale wasn't just well outside the consensus of most economists and the nonpartisan Joint Committee on Taxation. Two months into the new tax regime, a survey by Morgan Stanley found that "only 13% of companies' tax cut savings will go to pay raises, bonuses and employee benefits" while "43% will go to investors in the form of stock buybacks and dividends." American companies, already sitting on mountains of cash, have already spent over $170 billion on stock buybacks alone in 2018, the most ever this early in the year. As it turns out, Democrats warned that these gigantic gains for gilded-class shareholders would come to pass. And it's hardly the first time. For decades, Democrats have been proven right about what tax code changes would or wouldn't do for the rich and the economy over all. 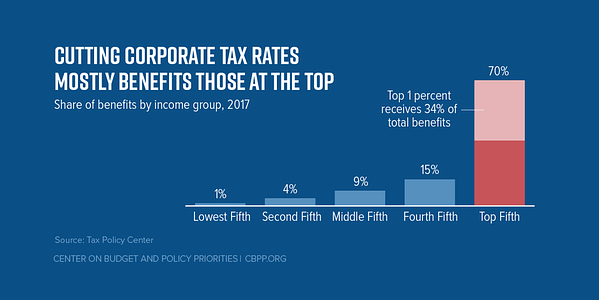 Writing in the Washington Post, Paul Waldman pointed that the data so far confirm Democrats' warning that the GOP corporate tax cut was "a scam."

They charged that workers would see only a fraction of the benefits, and instead corporations would use most of their windfall for things like stock buybacks, which increase share prices and benefit the wealthy people who own the vast majority of stocks.