All along, the real danger of the so-called "fiscal cliff" wasn't that U.S. national debt would increase, but instead that it would drop too quickly. Now, the surprise news that the American economy contracted by 0.1 percent in the last quarter of 2012 is providing a case in point. Along with the impact of super storm Sandy, declining exports and shrinking inventories, steeps cuts in federal (especially defense) spending explain much of the shortfall from the consensus forecast of 1.1 percent growth. As it turns out, since the start of the great recession the unprecedented shrinkage of the U.S. public sector has hampered economic growth and likely added a full point to the unemployment rate.

As Thinkprogress noted Wednesday, "The 0.1 percent contraction is almost entirely attributable to cuts in government spending." The Bureau of Labor Statistics (BLS) explained:

That development came just one day after the Bipartisan Policy Center warned that the automatic budget sequester now scheduled to kick in on March 1st could cost the U.S. one million jobs in 2013. As Jared Bernstein lamented Wednesday:

The role of diminished government spending--austerity at time when we need a fiscal push--is a useful reminder that it's not nature that has us stuck in this slog, it's policy. 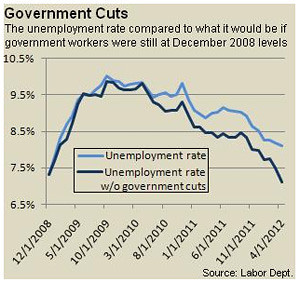 All told, the public sector at all levels of government has shed over 600,000 employees since mid-2009. (The figure was 89,000 over the last three months of 2012, representing one government job for five gained in the private sector.) The triple whammy of declining state and local tax revenues (which only returned to 2008 levels last year), draconian budget cuts and the drying up of federal stimulus funds have led to a record decline in government jobs.
That, according to some of the leading voices of the conservative movement, is a good thing. In the fall of 2011, columnist George Will exulted that the public sector "happily shrank" and cheered "that's good." For his part, Senate Minority Leader Mitch McConnell (R-KY) called those layoffs a "local problem." In June, Liz Cheney mocked President Obama for "actually trying to undo even the good that is being done at the state level."
Unfortunately for the American economy, what's been happening to government workers at the state and local level is far from "good."
In April, the Economic Policy Institute (EPI) showed how bad with the chart above. Noting that the private sector had gained 2.8 million jobs while federal, state and local governments shed 584,000 just since June 2009, EPI concluded that the public sector job losses constituted "an unprecedented drag on the recovery":

The current recovery is the only one that has seen public-sector losses over its first 31 months...
If public-sector employment had grown since June 2009 by the average amount it grew in the three previous recoveries (2.8 percent) instead of shrinking by 2.5 percent, there would be 1.2 million more public-sector jobs in the U.S. economy today. In addition, these extra public-sector jobs would have helped preserve about 500,000 private-sector jobs.

For the first time in 40 years, the government sector of the American economy has shrunk during the first three years of a presidential administration.
Spending by the federal government, adjusted for inflation, has risen at a slow rate under President Obama. But that increase has been more than offset by a fall in spending by state and local governments, which have been squeezed by weak tax receipts.
In the first quarter of this year, the real gross domestic product for the government -- including state and local governments as well as federal -- was 2 percent lower than it was three years earlier, when Barack Obama took office in early 2009.

All told, the unemployment rate without the hemorrhaging of public sector jobs could be a full point lower. "We're talking big numbers here. If government employment under Mr. Obama had grown at Reagan-era rates," Paul Krugman lamented in March, "1.3 million more Americans would be working as schoolteachers, firefighters, police officers, etc., than are currently employed in such jobs."
Yet when President Obama rolled out his $447 billion American Jobs Act including new assistance to state and local governments in the fall of 2011, Republicans made it clear why they opposed a bill former McCain economic adviser Mark Zandi forecast that could create up to 1.9 million jobs and add two points to U.S. GDP:

"Obama is on the ropes; why do we appear ready to hand him a win?"

In response to the GOP filibuster, a frustrated Obama could only ask:

"Are they against putting teachers and police officers and firefighters back on the job? Are they against hiring construction workers to rebuild our roads and bridges and schools?"

In a word, yes. And unless the looming sequester is delayed or cancelled altogether (something neither party sees as likely), the U.S. economy will take another body blow. And not just from defense cuts; "non-defense, discretionary" spending will be reduced to the lowest level in decades, further pummeling already hard-hit state and local governments. For Americans looking at a sluggish job market, the result will be all pain, no gain.
UPDATE: The Washington Post and New York Times have more background on the steep drop in defense spending that shaved more than a point off of GDP growth. Most of it is explained by cyclical, quarter-to-quarter patterns in Pentagon spending, which typically jumps in the last quarter of the fiscal year (which ends in September) and drops in the first quarter of the next (October to December). Whether more spending was cut in anticipation of the sequester is unclear.