For the first time in years, passage of the farm bill is producing conflict and controversy on Capitol Hill. But even as House Republicans demand $20 billion in cuts to the Supplemental Nutrition Assistance Program (SNAP) that would remove five million people from the food stamp rolls, the Government Accountability Office offered yet another example of farm subsidies run amok. An audit by the GAO found that Uncle Sam has been sending checks worth millions of dollars, not estate tax bills, to thousands of dead farmers. 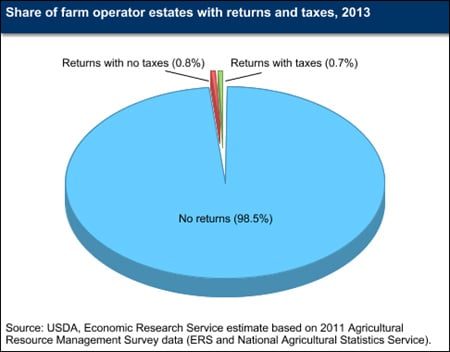 As the New York Times explained, the GAO report arrived just "as the House and the Senate prepared to meet to work out their differences on a farm bill that would greatly expand some subsidies, like crop insurance":

The Government Accountability Office, the investigative arm of Congress, said the problem involved several agencies within the department.
The Natural Resources Conservation Service, which oversees the Agriculture Department's conservation programs, sent out $10.6 million in payments between 2008 and 2012 to more than 1,000 people who had been dead for more than a year, according to the report.
The Risk Management Agency, which administers the crop insurance program, paid $22 million to more than 3,400 policyholders who had been dead for at least two years. The G.A.O. said that some of those payments might have been made while the farmer was still alive, but that there was no way to know for sure.

While Uncle Sam may not know for sure how many thousands of zombie farmers continue to receive taxpayer subsidies, the U.S. Treasury has a pretty good handle on how many paid estate taxes. As CBS DC documented in December, the number is shockingly small:

But those numbers can before the "fiscal cliff" deal, which raised the threshold at which the 35 percent estate tax kicks in at $5.12 million per person. As CBPP detailed in May, family farms will contribute almost nothing to the $200 billion in revenue the estate tax is forecast to generate over the next decade:

TPC estimates that only20 small business and farm estates nationwide will owe any estate tax in 2013. (TPC's analysis defined a small-business estate as one with more than half its value in a farm or business and with the farm or business assets valued at less than $5 million.) This figure represents only 0.00075 percent of all estates -- that is, about one out of every 130,000 estates of people who die this year. Furthermore, these 20 estates will owe just 4.9 percent of their value in tax, on average.

So much for John Boehner's claim that "people who aren't wealthy, who may have built up value in land over generations and many family farms find themselves in situations where they've got to sell the farm in order the pay the taxes." (That large corporate farms, according to the USDA, account for only 5.3 percent of total farms but make up 73.5 percent of all farms' gross revenue helps explain Boehner's deception.) In reality, the situation has changed little since 2001, when President George W. Bush traveled to Des Moines to announce, ''I heard somebody say, 'Well, you know, the death tax doesn't cause people to sell their farms,' '' adding, ''I don't know who they're talking to in Iowa.'' As it turned out, neither Hawkeye State farmers nor researchers could name one. As David Cay Johnston, among the nation's leading journalists when it comes to tax issues, conclude in the New York Times eight years ago:

As we learned this week, estates that received checks from the Agriculture Department are another matter. Apparently, for American farmers, the old saying that the only certainties in life are death and taxes is only half true.