GOP Candidates Must Take the Petraeus Test on Iran 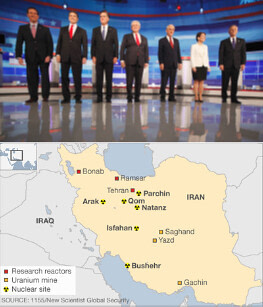 As the U.S. launched its invasion of Iraq back in 2003, General David Petraeus famously asked, "Tell me how this ends." Eight and a half years, 4,500 American servicemen and women killed, 30,000 wounded and over $1 trillion later, in many ways the answer is still unclear. Nevertheless, the same week President Obama declared the Iraq conflict officially over, the Republican presidential candidates took to the debate stage in Iowa to potentially offer a repeat in Iran. But while most have endorsed U.S. and/or Israeli military action to destroy Tehran's nuclear capability, none have answered Petraeus' question about what happens next.
Thursday's GOP debate in Sioux City brought the Iran question to the fore, as Rick Santorum and Michele Bachmann took turns bludgeoning Ron Paul and his opposition to American intervention. Santorum, arguing that Iran has essentially "at war with us since 1979," said his message to Tehran was simple one. If you do not open up those facilities and close them down," Santorum warned, "We will close them down for you." Despite having been corrected on the claim before by Politifact, Bachmann insisted:

"I think I have never heard a more dangerous answer for American security than the one we just heard from Ron Paul.... And the reason why I would say that is because we know without a shadow of a doubt Iran will take a nuclear weapon, they will use it to wipe our ally Israel off the face of the map. And they've stated that they will use it against the United States of America."

For his part, as in this interview last week with the Washington Examiner, Mitt Romney has on occasion acknowledged the complexity of a strike against Iran and even the possibility of success. But many of Romney's advisers not only helped bring you the war in Iraq, but have been advocating an American attack on Iran "before it's too late." In 2007 Romney declared he favored all options "from blockade to bombardment" and announced that "if for some reasons [the Iranians] continue down their course of folly toward nuclear ambition, then I would take military action if that's available to us." And in a Wall Street Journal op-ed last month titled, "I Won't Let Iran Get Nukes," Romney talked tough in two languages:

Si vis pacem, para bellum. That is a Latin phrase, but the ayatollahs will have no trouble understanding its meaning from a Romney administration: If you want peace, prepare for war...Only when the ayatollahs no longer have doubts about America's resolve will they abandon their nuclear ambitions.

While Newt Gingrich, too, has fretted about the likelihood of disabling the Iranian nuclear program with a campaign of air strikes, he has also been clear about his approach to the mullahs in Tehran:

But for all their casual bravado about the prospect of an American or Israeli attack on Iran, the Republican White House hopefuls have been silent about what happens after the bombs and missiles start falling. Fortunately, there are some voices in both the U.S. and Israel warning policymakers about the day after.
Last month, U.S. Defense Secretary Leon Panetta warned that "To go beyond (sanctions and diplomacy) raises our concerns about the unintended consequences that could result. ... There are going to be economic consequences to that, that could impact not just on our economy but the world economy." A majority of "national security insiders" surveyed by National Journal argued that no military strike should be carried out. Only 5 percent backed military action by Israel alone; none supported unilateral American strikes against Tehran. 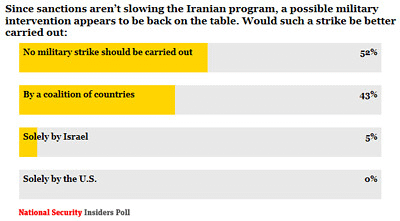 Their fears are well-founded. As Panetta and other analysts have cautioned, strikes at Iran's well-protected nuclear installations might only delay Tehran's program by a couple of years. And unlike the Israeli destruction of the Iraqi reactor at Osirak in 1981, retaliation by Iran is almost certain. While shipping in the Straits of Hormuz could be threatened, Iran could strike at Israel, U.S. targets in the region and even Turkey. Tehran might not rain missiles on Israel, but its Hezbollah proxy in Lebanon almost surely would.
Those worries extend to Israel as well. In July, former Mossad chief Meir Dagan described the possibility a future Israeli Air Force attack on Iranian nuclear facilities as "the stupidest thing I have ever heard":

When asked about what would happen in the aftermath of an Israeli attack Dagan said that: "It will be followed by a war with Iran. It is the kind of thing where we know how it starts, but not how it will end."
The Iranians have the capability to fire rockets at Israel for a period of months, and Hizbollah could fire tens of thousands of grad rockets and hundreds of long-range missiles, he said.
At the same time, Tehran can activate Hamas, and there is also a danger that Syria will join the war, Dagan added.

Another former Mossad leader, Ephraim Halevy, declared last month that "An attack on Iran could affect not only Israel, but the entire region for 100 years." And as ThinkProgress reported, "twelve of the eighteen living former heads of the three Israeli security branches are actively opposing or have spoken out against Netanyahu's aggressive gestures toward Iran."
(Even if the U.S. did not join an Israeli assault against Iran's nuclear facilities, it would certainly be caught in the blowback certain to ensue across the region. That's why the statement from Joint Chiefs Chairman General Martin Dempsey that he didn't know whether Israel would give Washington advance warning of attacks aimed at disabling Tehran's nuclear capacity is so worrisome.)
At the end of the day, the United States must choose the least worst option. A nuclear-armed Iran would likely prompt an arms race throughout the Middle East, as Saudi Arabia, Egypt and other Sunni regimes act to counter Shiite Tehran's growing power. But despite Santorum's claim that "mutual assured destruction, like the policy during the cold war with the Soviet Union," wouldn't work with Tehran because of the Iranians' supposed quest for martyrdom and their eschatology of the 12th Imam, there's no evidence that Iran or any other country is prepared for national suicide. And to be sure, a nuclear attack by Iran or its proxies on Israel would be an act of national suicide by guaranteeing massive nuclear retaliation from the Jewish's state's own arsenal. (Which is why suggestions that Mahmoud Ahmadinejad or any other Iranian leader would turn atomic weapons over to Hezbollah or another terrorist group needs to be taken with a very large grain of salt.)
But whatever option - strikes against Tehran's nuclear targets, sanctions and covert activity to convince the Iranians to change course or even regimes, or living with a nuclear Iran - President Romney, President Gingrich or President Obama for that matter must take David Petraeus' test.
Tell me how this ends.