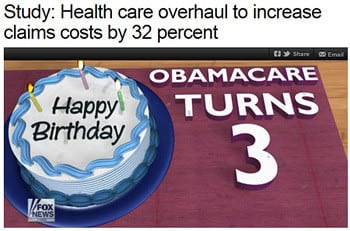 The White House marked the third anniversary of the Affordable Care Act with numbers highlighting its early impact. Over six million seniors have saved $6.1 billion on prescription drugs, while 3.1 million young Americans under age 26 have gained health insurance on their parents' policies. All told, 71 million people have received free preventive services under the ACA. Meanwhile, some of the staunchest Republican foes of Obamacare have rightly concluded that Washington's expansion of Medicaid would be a boon to the millions of uninsured in their states.
Given those developments, it's no wonder GOP leaders are seizing on two recent studies to attack the Obamacare program their party has tried 35 times to repeal. Last month, Republicans led by Senator Jeff Sessions (R-AL) pointed to a GAO assessment showing that the ACA will add over $6 trillion to the national debt over the next 75 years. And now, conservatives are trumpeting a report by the Society of Actuaries warning that "insurance companies will have to pay out an average of 32 percent more for medical claims under President Barack Obama's health care overhaul."
As it turns out, what the two analyses -and their Republican amplifiers--leave out is far more important than what they include when it comes to the Affordable Care Act. Which is why, as we'll see below, the GOP's dire doomsday predictions are political malpractice of the worst kind.
On Monday, the National Republican Congressional Committee (NRCC) was quick to cite the AP coverage of the Society of Actuaries report:

A new report out this afternoon is projecting a 32 percent rise in medical claims costs and a "double-digit in their individual health insurance markets."

Unfortunately, that picture is woefully incomplete. Leave aside for the moment that SOA contracted out the data analysis to a subsidiary of UnitedHealth Group, the nation's largest health insurers. The SOA analysis did not include Americans covered by employer-provided insurance, a group which represents between 55 and 60 percent of all people between the ages of 18 and 65. More importantly, the Actuaries did not account for either new Obamacare subsidies for consumers or the extensive cost-control measures put in place by the ACA. So, while it is true that millions of sicker Americans previously denied coverage will enter the individual insurance marketplace, both the federal government and many states have taken steps to limit how those higher-cost customers will impact others' premiums. As former Medicare actuary Richard Foster explained, "Actuaries tend to be financially conservative, so the various assumptions might be more inclined to consider what might go wrong than to anticipate that everything will work beautifully." For their part, the SOA admitted their analysis was even more limited than that:

Kristi Bohn, an actuary who worked on the study, acknowledged it did not attempt to estimate the effect of subsidies, insurer competition and other factors that could mitigate cost increases.

But while the Society of Actuaries didn't consider those factors, others have. Officials in both Maryland and the District of Columbia rejected SOA's findings that the ACA will boost claims costs by 67 and 52 percent in their respective jurisdictions. As ThinkProgress documented:

In fact, more comprehensive studies of the health reform law that incorporate all of its provisions -- rather than just the potentially negative ones -- have found that "[m]ost young adults and families will be largely shielded from the full effects of the narrower age rating bands thanks to the ACA's increased eligibility for Medicaid and tax credits offered through state health insurance exchanges or through access to employer-sponsored insurance," and that Americans between the ages of 21 and 27 purchasing insurance through the individual market "will be protected by Medicaid/CHIP or exchange-based subsidies under reform."
That's what led Larry Levitt, an insurance expert with the nonpartisan Kaiser Family Foundation, to find the SOA's report to be useless barring more targeted analysis. "I'd generally characterize it as providing useful background information, but I don't think it's complete enough to be treated as a projection," Levitt said.

But if the SOA's conclusions are dubious, those of Alabama Senator Jeff Sessions are ridiculous.
Unhappy that the nonpartisan Congressional Budget Office concluded the Affordable Care Act would reduce the national debt (a finding GOP House Majority Leader Eric Cantor wrongly mocked as "budget gimmickry"), Sessions asked the Government Accountability Office (GAO) to come up with its own assessment. And as The Hill reported, Sessions got what he wanted by claiming the GAO forecast the ACA "increase the deficit by $6.2 trillion over 75 years." Sessions, the top Republican on the Senate Budget Committee crowed:

"The big tax increases in the bill come nowhere close to covering the bill's spending," Sessions said Tuesday during a Budget Committee hearing.
"The big-government crowd in Washington manipulated the numbers to get the financial score they wanted, to get their bill passed and to increase their power and influence," Sessions said.

As it turns out, of course, it was Jeff Sessions who was manipulating the numbers. As Joan McCarter explained, "Sessions told the GAO to project what would happen if the provisions of the bill designed to curb projected growth in health care spending--the Independent Payment Advisory Board, the excise tax on high-cost plans, and reductions in Medicare payments to providers based on performance--were repealed or phased out over time." If you don't cook the books according to Sessions' recipe, the GAO pointed out, the picture is much rosier:

Assuming the law is enforced as-is, the U.S. deficit will decline 1.5 percent as a share of the economy over the next 75 years, according to the GAO. Auditors attributed 1.2 percent of this improvement to the Affordable Care Act.

As Steve Benen joked in response to Sessions' grandstanding:

This is roughly the equivalent of the Boston Celtics' coach asking someone on his staff, "Figure out what our record would be if our opponents' points didn't count." Then, soon after, the coach called a press conference to declare, "Good news everyone! We're undefeated! And every game was a shutout!"

As with the SOA report, you'd never know that if you just listened to Republicans like Jeff Sessions. "Our health care system," Sessions boasted last week, is "the best in the world." For once, though, he included a caveat:

"So we've got people that die sooner than some other countries."