On Monday, the New York Times claimed that many of the Republican governors who swept to power on 2010 "are adopting decidedly more moderate tones as they begin their sophomore year in office." But that premature conclusion was belied by the AP, which on the same day reported that "many have trained their sights on what has long been a fiscal conservative's dream: the steep reduction or even outright elimination of state income taxes." And that would be a continuing disaster for the United States. After all, even as their revenues only now are returning to pre-recession levels, state and local governments have shed over half a million jobs and produced a serious drag on the U.S. economic recovery.
Despite the slowly improving situation, a recent survey by the National Governors Association (NGA) and the National Association of State Budget Officers (NASBO) found that state general fund revenue remains $21 billion below 2008 levels. All told, the Center on Budget and Policy Priorities reported earlier this month, 29 states are forecasting budget shortfalls totaling $44 billion. While that figure pales in comparison to the $537 billion over the previous four years, now is certainly not the time to be draining state coffers by cutting income taxes.

Nevertheless, that is precisely what several GOP governors are trying to do. As the Associated Press explained yesterday:

The party has launched income tax efforts in Idaho, Kansas, Maine, Missouri, Ohio, Oklahoma and South Carolina. But it's not clear how all those states would make up for the lost revenue, and [the Brookings Urban Tax Policy Center's Kim] Rueben said she's not aware of any state in modern history that has eliminated an income tax...
Conservatives say the lost revenue will be made up by increased economic activity -- more businesses paying corporate taxes and more employees paying property taxes and spending money. But economists warn those predictions are unrealistic.

Not just unrealistic (as the Republican record at the federal level shows), but dangerous.
After all, revenue shortfalls and the end of the 2009 federal stimulus led state and local governments to cut 455,000 jobs since the beginning of 2010. According to the Bureau of Labor Statistics, public-sector jobs account for the smallest share of the nation's employment since the 2008 financial crisis began. The consulting firm Challenger, Gray & Christmas found that in 2011, public-sector layoffs hit a record and accounted for a third of all job cuts in the U.S. economy. Even with December's strong jobs report showing the U.S. added over 200,000 jobs, 12,000 more government workers lost theirs.
And that growing toll in the states continues to produce what might be termed the "anti-stimulus." As former Biden economic adviser Jared Bernstein explained using this helpful chart last week, the budget crunch among state and local governments is a key reason why "we're stuck in slow growth mode." 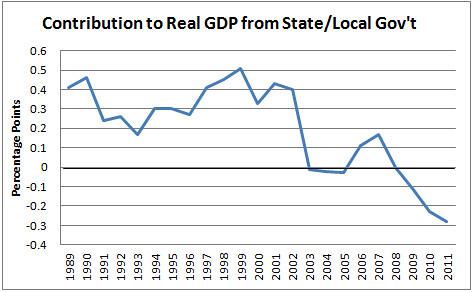 The figure shows the yearly percentage point contribution to or subtraction from real GDP growth from the state and local sectors since the late 1980s. The trend bounces around but the recent cliff dive is evident. It's also why we keep losing jobs in these sectors month after month.
Unlike the feds, states have to balance their budgets every year, which means they either raise taxes or cut services. They haven't done much on the tax side, so they've been laying off teachers, cops, maintenance workers; practically every month over the past few years we've been adding private sector jobs and shedding public sector jobs.
In a very real sense, what you have here is a microcosm of austerity measures at work in cities and towns across the country.

The macro view, as David Leonhardt of the New York Times documented, isn't any prettier. Austerity at the state and local government hasn't merely produced a hemorrhage of jobs; it has guaranteed a substantial drag on overall U.S. economic growth:

Why, then, wasn't economic growth in the most recent quarter better than the 2.8 percent that the Commerce Department reported today?
Because the economy is the combination of the private and public sectors. The public sector has been shrinking for the last year and a half -- mostly because of cuts in state and local government, with some federal cuts, especially to the military, playing a role as well. In the fourth quarter, government shrank at an annual rate of 4.5 percent.
Over the last two years, the private sector grew at an average annual rate of 3.2 percent, while the government shrank at an annual rate of 1.4 percent.
The combined result has been economic growth of 2.3 percent.

As Paul Krugman lamented about the GOP myth of "expansionary austerity" at the state level, "It's hard to overstate just how wrong all this is."
Wrong, and being made worse by Republican policy. As Bernstein noted, despite the clear success of Recovery Act aid in preserving state and local jobs, obstructionist Republicans in Congress continue to block the American Jobs Act's $35 billion in new assistance to "prevent hundreds of thousands of ongoing layoffs." Meanwhile in Kansas, Governor Sam Brownback wants to offset new income tax cuts by dramatically increasing the tax burden on the state's poorest households. Oklahoma Republicans similarly hope to reduce "the income tax from 5.25 percent to 4.75 percent by eliminating the personal exemption for every household member, including children, as well as the child tax credit and earned income tax credit." And in Ohio, Governor John Kasich still would like to keep his 2010 campaign pledge to phase out the state's personal income tax.
The result of these Republican state-level "starve the beast" measures is as predictable as it is reckless. Contracting revenues means more job cuts for state and local government, and more blows to the U.S. economy overall. And that's just fine with Republicans in Washington and their water-carriers in the media. After all, while Senate Minority Leader Mitch McConnell (R-KY) called those layoffs a "local problem," columnist George Will exulted that the public sector "happily shrank" and cheered "that's good."
Just not for the American economy or the American people.