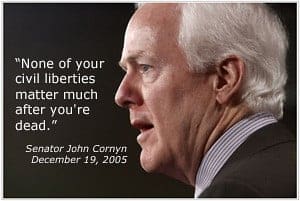 Revelations that the Justice Department authorized the seizure of Associated Press phone records have produced condemnation from Congressional Democrats and other Obama allies. But while Capitol Hill Democrats decried the tactics as "inexcusable" (Senate Majority Leader Harry Reid), "troubling" (Senator Pat Leahy) and having "impaired the First Amendment" (Rep. Zoe Lofgren), Congressional Republicans have been largely silent. Silent, that is, with good reason. After all, their relative quiet isn't just due to the fact that they demanded the investigation into the 2012 Yemen leak and throughout the Bush presidency supported the prosecution of leakers, whistleblowers and reporters alike. As it turns out, when it came to justifying the unprecedented domestic surveillance of American citizens by the Bush administration, Republicans leaders claimed "you really don't have any civil liberties if you're dead."
Unlike their foaming at the mouth reactions to the Benghazi and IRS imbroglios, the GOP's best and brightest have in comparison exhibited an almost Zen-like patience over the AP affair. Former Bush Attorney General Alberto Gonzales urged giving the Obama administration the benefit of the doubt. While John McCain explained, "For me, to rush to a judgment without knowing all the facts is just not appropriate," Rep. Trey Gowdy (R-SC) defended the Justice Department by proclaiming, "they are doing what we asked them to do, investigate the leak." Meanwhile, the number two Republican in the Senate John Cornyn (R-TX) urged all to withhold judgment:

Of course, when Americans learned on December 16, 2005 that President Bush had ordered the National Security Agency (NSA) to undertake warrantless electronic surveillance of their communications, Senator Cornyn insisted that no net could possibly be too broadly cast. Echoing the talking point vomited forth by Kansas Senator Pat Roberts ("You really don't have any civil liberties if you're dead") and Alabama's Jeff Sessions ("Over 3,000 Americans have no civil rights because they are no longer with us"), John Cornyn declared:

"None of your civil liberties matter much after you're dead."

As Timothy Lee explained in the Washington Post on Tuesday, the real scandal in the AP case may be that the actions of the Justice Department are legal. Despite the protests of Bush torture architect John Yoo, the same could not be said of the NSA warrantless eavesdropping program. After all, it wasn't just constitutional scholars arguing that the Commanded-in-Chief's Article II war powers or the 2001 Authorization for the Use of Military Force did not allow the President to ignore the Foreign Intelligence Surveillance Act (FISA). As it turned out, in March 2004 Acting Attorney General James Comey and FBI Director Robert Mueller threatened to resign if President Bush reauthorized a program they considered illegal without changes they demanded.
President Bush was blissfully unaware of the looming resignations which almost resulted from that now infamous episode which occurred in the hospital room of a gravely ill John Ashcroft. Of course, the American people didn't learn about the existence of the NSA domestic spying program until December 2005, more than a year after George W. Bush narrowly secured reelection over Democrat John Kerry. Voters would have known sooner, but as the Times' Eric Lichtblau later revealed, "For 13 long months, we'd held off on publicizing one of the Bush administration's biggest secrets."
Nevertheless, the Bush administration and its allies in Congress and the conservative media showed great enthusiasm for prosecuting Lichtblau and his co-author James Risen, as well as NSA whistle-blower Thomas Tamm. (Risen would later be subpoenaed over his reporting on the Iranian nuclear program.) After the revelations about the NSA program by the New York Times on December 16, 2005, President Bush three days later raged about what he deemed "a shameful act" that is "helping the enemy". Claiming he didn't order an investigation, Bush added "the Justice Department, I presume, will proceed forward with a full investigation" At a subsequent press conference that same day, Attorney General Alberto Gonzales suggested the retribution that was to come:

Leading the charge in the right-wing echo chamber has been Gabriel Schoenfeld, then editor of Commentary and later an adviser to Mitt Romney. On June 6, 2006, Schoenfeld appeared before the Senate Judiciary Committee to claim that the New York Times violated federal criminal statutes, if not the Espionage Act of 1917 by publishing its delayed story about NSA domestic surveillance. One month later on July 3, he laid out his case in the Weekly Standard, approvingly citing Gonzales' veiled threats towards the New York Times:

"There are some statutes on the books, which, if you read the language carefully, would seem to indicate that that is a possibility."

After news of the FBI's raid on Tamm's home in the summer of 2007, Schoenfeld again called for the scalps of Risen and Lichtblau:

"With the investigation making progress, the possibility remains that even if the New York Times is not indicted, its reporters - James Risen and Eric Lichtblau - might be called before the grand jury and asked to confirm under oath that Tamm, or some other suspect, was their source. That is what happened to a whole battalion of journalists in the investigation of Scooter Libby in the Valerie Plame fiasco.
If Risen and Lichtblau promised their source confidentiality, they might choose not to testify. That would potentially place them, like Judith Miller in the Libby investigation, in contempt of court and even land them in prison."

That didn't happen. As for Tamm, the DOJ dropped its investigation in 2011. But while President Bush may be gone, President Obama to the great consternation of many supporters and civil libertarians alike has pursued an even more adversarial posture towards press reporting of national security stories. As the New York Times editorial board lamented this week:

The Obama administration has indicted six current and former officials under the Espionage Act, which had previously been used only three times since it was enacted in 1917. One, a former C.I.A. officer, pleaded guilty under another law for revealing the name of an agent who participated in the torture of a terrorist suspect. Meanwhile, President Obama decided not to investigate, much less prosecute, anyone who actually did the torturing.

And that should make John Cornyn and his Republican friends in Congress very happy, indeed. After all, Cornyn threatened to block Attorney General Eric Holder's nomination over the torture issue. Besides, when it comes to reporters in particular and American citizens in general, Cornyn insists, "None of your civil liberties matter much after you're dead."