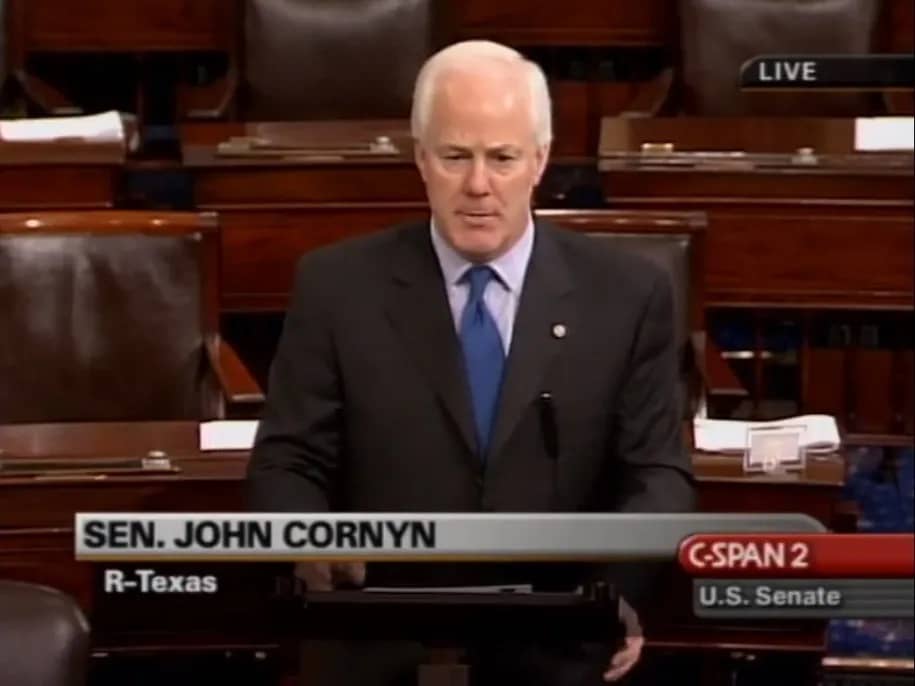 Senator Minority Leader Chuck Schumer (D-NY) on Thursday expressed regret that he “used the words I used yesterday” in warning Supreme Court Justices Kavanaugh and Gorsuch of the public backlash their reproductive rights rulings will produce. While Majority Leader Mitch McConnell (R-KY) proclaimed, “There is nothing to call this except a threat,” more than a dozen GOP Senators called for the chamber to censure Senator Schumer. Predictably, McConnell’s right-hand man, GOP Majority Whip John Cornyn (R-TX) expressed his outrage:

“The last thing we need is one of the most powerful men in the country to make a threat against Supreme Court justices. It doesn't matter whether you're a fourth grader on the playground or a United States senator, our lesson should be that violence is never the answer and that words matter.”

That Cornyn’s response was so predictable made it all the more disgusting. After all, it was the same Senator John Cornyn who in 2005 warned that “unaccountable” judges “making political decisions” leads to a boiling point “where some people engage in, engage in violence.” And in 2016, a still unrepentant John Cornyn promised any nominee President Obama selected to replace the late Antonin Scalia “will bear some resemblance to a piñata” when the Republican majority was through with them.

Long before his tough talk about the beat-down any Democratic pick to the Supreme Court would suffer at the hands of Senate Republicans, John Cornyn was an outspoken foe of the judicial filibuster and so-called “activist” judges. Of course, back then the President of the United States was Republican George W. Bush.

And in 2005, one of the pet causes of Bush and his Republican allies was federal intervention in the case of Terri Schiavo. As you may recall, with his wife Terri in a “persistent vegetative state,” Michael Schiavo wanted to honor her wishes and have her disconnected from life support. But when her parents disagreed, the GOP’s best and brightest supported them in court. They lost in each and every court, including in the Supreme Court, which invalidated a bill passed by Congress and signed by President Bush forbidding Schiavo’s doctors from ending life support treatment. After their final defeat on March 31, 2005, then-House Majority Leader Tom Delay (who had previously sought successfully to have his own comatose father disconnected from life support) ominously warned “unaccountable, arrogant, out-of-control judiciary that thumbed their nose at Congress and the president.”

“This loss happened because our legal system did not protect the people who need protection most, and that will change. The time will come for the men responsible for this to answer for their behavior." [Emphasis mine.]

Now, Delay’s incendiary comments came just weeks after Judge Rowland Barnes and two others were killed at a courthouse in Atlanta and the husband and mother of U.S. District Court Judge Joan Lefkow were murdered in her Chicago home by an angry litigant. Nevertheless, on April 4, 2005 Texas Republican John Cornyn took to the floor of the Senate to amplify Delay’s threat. As the Washington Post reported at the time:

"It causes a lot of people, including me, great distress to see judges use the authority that they have been given to make raw political or ideological decisions," he said. Sometimes, he said, "the Supreme Court has taken on this role as a policymaker rather than an enforcer of political decisions made by elected representatives of the people."

Cornyn continued: "I don't know if there is a cause-and-effect connection, but we have seen some recent episodes of courthouse violence in this country…And I wonder whether there may be some connection between the perception in some quarters, on some occasions, where judges are making political decisions yet are unaccountable to the public, that it builds up and builds up and builds up to the point where some people engage in, engage in violence. Certainly without any justification, but a concern that I have." [Emphasis mine.]

Facing criticism for his remarks seemingly endorsing right-wing retribution against judges, Cornyn stood his ground. During their appearance together on Fox News, fellow Judiciary Committee member Chuck Schumer declared, “There is a whiff in the air of threatening judges” and worried “this is getting out of hand.” Cornyn, himself a former judge on the Texas Supreme Court for 13 years, refused to apologize:

For his part, Chuck Schumer sheepishly deferred, responding “I accept that Senator Cornyn wants to clarify his remarks.”

In March 2006, RBG revealed that she and Justice O'Connor were the targets of death threats. On February 28th, 2005, the marshal of the Court informed O'Connor and Ginsburg of an Internet posting citing their references to international law in Court decisions (a frequent whipping boy of the right) as requiring their assassination:

"This is a huge threat to our Republic and Constitutional freedom...If you are what you say you are, and NOT armchair patriots, then those two justices will not live another week."

Neither O'Connor nor Ginsburg were shy about making the connection between Republican rhetoric of judicial intimidation and the upswing in threats and actual violence against judges. While Ginsburg noted that they "fuel the irrational fringe," O'Connor blamed Cornyn and his fellow travelers for "creating a culture" in which violence towards judges is merely another political tactic. A CNN detailed:

"It gets worse," O'Connor told a group of lawyers at Georgetown University on Thursday. "It doesn't help when a high-profile senator suggests a 'cause-and-effect connection' " between controversial rulings and subsequent acts of violence.

She was referring to Sen. John Cornyn, a Texas Republican, who said last April he was troubled by what he saw as the Supreme Court becoming a "policy maker."

Senator Cornyn, who on Thursday demanded Senator Schumer apologize for his remarks this week, never said “I’m sorry.” Not in 2005. Not in 2006. Not ever. And in the immediate aftermath of the death of conservative Justice Antonin Scalia, Cornyn once again turned to inflammatory rhetoric. As CNN among others reported, Cornyn didn’t merely promise to prevent confirmation hearings for any nominee President Obama might select. He warned that any jurist who answered the President’s call would be punished for doing so:

"I think they will bear some resemblance to a piñata," said Sen. John Cornyn of Texas.

"What I don't understand is how someone who actually wants to be confirmed to the Supreme Court would actually allow themselves to be used by the administration in a political fight that's going to last from now until the end of the year," Cornyn told a small group of reporters in the Capitol.

He added: "Because there is no guarantee, certainly, after that time they're going to look as good as they did going in.” [Emphasis mine.]

Now that the GOP blockade of Merrick Garland and a Republican president have put Neil Gorsuch and Brett Kavanaugh on the Roberts Court, John Cornyn feels differently. “Congressional leaders must set an example for the American people and respect the independence of the judiciary and the three coequal branches of government,” Cornyn lectured this week, “The simple end of this would be for Senator Schumer to apologize to the justices.”

That certainly is one approach. Another would be to follow the example of Vice President Dick Cheney. In 2004, Cheney famously responded to Vermont Democratic Senator Pat Leahy’s criticism of Halliburton’s contracts in Iraq by saying only, “F**k yourself.” As Cheney explained four years later to Chris Wallace of Fox News, he never apologized, either. “No, I thought he merited it at the time.”