Guns, Canes and "You Lie": The GOP State of the Union in the Age of Obama

President Barack Obama has yet to deliver his final State of the Union address, but the reviews from Republicans are already in. Texas Senator and 2016 White House hopeful Ted Cruz announced that he won't be attending, but nevertheless will be "disappointed" by the President's speech. Rep. Virginia Foxx (R-NC), probably best known for comparing regulation of for-profit colleges to the Holocaust and warning that Obamacare would "put seniors in a position of being put to death by their government," took to Twitter to declare, "Tonight I expect more empty words."
As it turns out, everything you need to know about how the GOP and its amen corner will react to Obama's 2016 SOTU was already on display during an earlier address he gave to Congress back in 2009. The furious right-wing reaction to that speech on health care reform to a joint session of House and Senate that September night was crystallized in two words: "You lie." With that episode and its aftermath, Republicans revealed what they love--guns--and everything they hate--immigrants, the first African-American President and the truth itself. 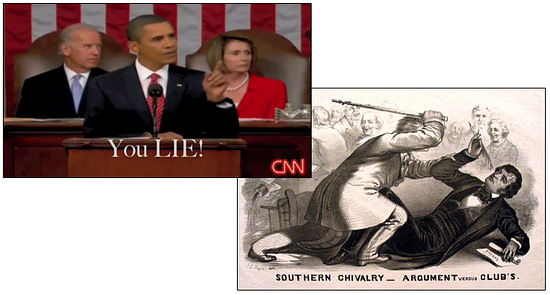 As you may recall, on September 9, 2009 President Obama spoke to Congress about what would become the Patient Protection and Affordable Care Act. But as a look back at the transcript shows, one unremarkable assertion he made produced a very remarkable response:

THE PRESIDENT: There are also those who claim that our reform efforts would insure illegal immigrants. This, too, is false. The reforms -- the reforms I'm proposing would not apply to those who are here illegally.
AUDIENCE MEMBER: You lie! (Boos.)
THE PRESIDENT: It's not true.

Now, that State of the Union outburst by South Carolina Republican Rep. Joe Wilson wasn't just unprecedented. It also happened to be a lie. Undocumented immigrants were already barred from receiving Medicaid and are not eligible to obtain the ACA's subsidies to purchase private health insurance. Nevertheless, conservatives rallied to Wilson's support, backing his slander as they did numerous others "not intended to be a factual statement" (for example, Obama is a Muslim, Obamacare is not an American citizen, Obamacare has "death panels" and is a "government takeover of health care") before and since.
But it's what happened afterwards that is even more telling. That same night, Wilson offered an unpology to Obama. Declaring that "I let my emotions get the best of me," Wilson announced:

"While I disagree with the president's statement, my comments were inappropriate and regrettable. I extend sincere apologies to the president for this lack of civility."

Nevertheless, only six of his House GOP colleagues joined in a resolution reprimanding Wilson. And in South Carolina and across the country, Republican voter poured $2 million into his campaign coffers. On September 12, Rep. Wilson released a fundraising video on YouTube repeating his Obamacare falsehood:

"On these issues, I will not be muzzled, I will speak up and speak loudly against this risky plan.
Supporters of the government takeover of health care, and the liberals who want to give health care to illegals, are using my opposition as an excuse to distract from the critical questions being raised about this poorly conceived plan."

As it turned out, one gun-seller wanted to make sure South Carolinians could support Joe Wilson with muzzles of their own.

Palmetto State Armory would like to honor our esteemed congressman Joe Wilson with the release of our new "You Lie" AR-15 lower receiver. These lowers are the same great quality you have come to expect from Palmetto State Armory and feature "You Lie" as the first six digits of the serial number. Only 999 of these will be produced, get yours before they are gone!
These forged lowers are made using high quality 7075-T6 aluminum and are marked "MULTI" to accommodate most builds. Finish is Black Hardcoat Anodize. 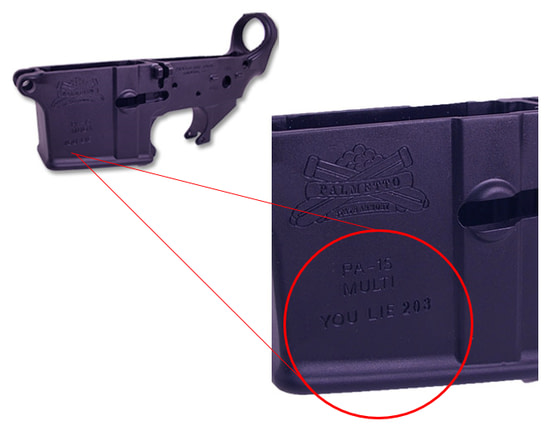 If this sounds hauntingly familiar, it should. That's because it eerily echoes one of the darkest moments in the history of both the United States Congress and South Carolina.

On May 19, 1856, Charles Sumner of Massachusetts had delivered a fiery speech condemning those who proposed extending slavery into the Kansas territory. Many of his attacks were aimed at senators from the south including Andrew Butler of South Carolina.
Three days after the speech was delivered Representative Preston Brooks of South Carolina (a relative of Senator Butler) entered the nearly deserted Senate Chamber where he found Senator Sumner working at his desk. Declaring the speech a "libel on South Carolina" Brooks fiercely and repeatedly beat the senator on the head and shoulders with his cane, which finally broke into pieces from the strain. Senator Sumner struggled to escape his assailant, who calmly left the scene after his cane broke.
The south hailed Brooks as a hero while the north claimed Sumner as an abolitionist martyr. While Sumner recovered from his injuries (he was absent from the Senate for three years) admirers sent Brooks canes as gifts.

Sumner nearly died from the assault and required three years to recover. But across the South, the reaction was rapturous, as this editorial from the South Carolinian attests:

We were not mistaken in asserting, on Saturday last, that the Hon. Preston S. Brooks had not only the approval, but the hearty congratulations of the people of South Carolina for his summary chastisement of the abolitionist Sumner...
And, to add the crowning glory to the good work, the slaves of Columbia have already a handsome subscription, and will present an appropriate token of their regard to him who has made the first practical issue for their preservation and protection in their rights and enjoyments as the happiest laborers on the face of the globe.
Meetings of approval and sanction will be held, not only in Mr. Brooks' district, but throughout the State at large, and a general and hearty response of approval will re-echo the words, "Well done," from Washington to the Rio Grande.

After Abraham Lincoln's election in November 1860, South Carolina led the parade of southern states seceding from the Union. As the Charleston Mercury put it on November 8, 1860:

"The tea has been thrown overboard, the revolution of 1860 has been initiated."

One hundred fifty-five years later after the defeat the cause Ulysses S. Grant described as "one of the worst for which a people ever fought", America's first African-American President will deliver his final State of the Union address. And it will be denounced by the Party of Lincoln using the same sound bites they're been regurgitating since before Barack Obama first took the oath of office. Don't be surprised if someone on the Republican side of the aisle shouts, "You lie!"