McCain: Forget Taxes and Gas Prices. No Really, Forget Them. 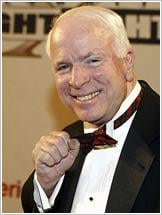 On more than one occasion this campaign season, Republican John McCain claimed Americans' economic worries were all in their heads. So it's only natural that a man who described the economic downturn as "psychological" would have his own mental strategy for coping with spiraling gas prices and looming tax bills. Just forget them.
That's the message emerging for two stories this weekend. First comes word, as Newsweek reported, that the McCains are delinquent in paying property taxes on an oceanfront condo in tony La Jolla, California. (That seaside getaway is not to be confused with the one of the McCains' other seven homes now up for sale, a Phoenix condo featuring "remote control window coverings.")

San Diego County officials, it turns out, have been sending out tax notices on the La Jolla property, an oceanfront condo, for four years without receiving a response. County records show the bills, which were mailed to a Phoenix address associated with Mrs. McCain's trust, were returned by the post office. According to a McCain campaign aide, who requested anonymity when discussing a private matter, an elderly aunt of Mrs. McCain's lives in the condo, and the bank that manages the trust has not been receiving tax bills on the property. Shortly after NEWSWEEK inquired about the matter, the McCain aide e-mailed a receipt dated Friday, June 27, confirming payment by the trust to San Diego County in the amount of $6,744.42. County officials say the trust still owes an additional $1,742 for this year, an amount that is overdue and will go into default July 1. Told of the outstanding $1,742, the aide said: "The trust has paid all bills shown owing as of today and will pay all other bills due."

As Dan McAllister, treasurer- tax collector for San Diego put it, "We do hear an awful lot of excuses for why people don't pay." Apparently, the $100 million couple fell behind on their mail.
Given John McCain's stern morality when it comes to the American foreclosure crisis, the La Jolla debacle is particularly ironic. In March, after all, McCain initially rejected a role for the federal government in alleviating the wave of home foreclosures crippling the economy. "Any assistance must be temporary," McCain said on March 25th, "and must not reward people who were irresponsible at the expense of those who weren't." Before reversing course just two weeks later, McCain admonished Americans delinquent on their mortgage payments that they should join the ranks of those:

"Doing what is necessary -- working a second job, skipping a vacation, and managing their budgets -- to make their payments on time."

As we also learned this weekend, John McCain's tone deafness regarding Americans' economic woes extends to skyrocketing gas prices. Just three weeks after insisting his critics' claim of a "Bush-McCain policy" is "false," McCain exhibited precisely the same detachment about fuel costs as the man he seeks to replace.
Earlier this year, President Bush was rightly lambasted for his stunning acknowledgement that he "hadn't heard" about predictions of gasoline prices hitting $4 a gallon. This week, John McCain followed suit, arguing that it "doesn't matter" that he doesn't know the price of gas. As Martin Wicksol of the Orange County Register documented:

WICKSOL: When was the last time you pumped your own gas and how much did it cost?
MCCAIN: Oh, I don't remember. Now there's Secret Service protection. But I've done it for many, many years. I don't recall and frankly, I don't see how it matters.
I've had hundreds and hundreds of town hall meetings, many as short a time ago as yesterday. I communicate with the people and they communicate with me very effectively.

McCain could have made the point that, as he did in April and June, Americans' pain at the gas pump is merely "psychological."
In a final irony, it is worth recalling that it is the millionaire McCain who branded his opponent Barack Obama "elitist." What would McCain have Americans do about that statement? As with so many of the contradictions and ironies which leave his mouth, forget about it.