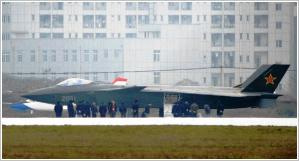 In 1996, President Clinton responded to provocative Chinese missile tests near Taiwan with what PBS described as "the largest show of naval force since the Vietnam War." But the American goal of preserving Taiwanese independence through a policy of "strategic ambiguity" may soon be untenable. With the announcements of a new Chinese stealth fighter and long-range anti-ship missiles, the days of enforcing the peace by sailing aircraft carrier battle groups through the Taiwan Straits are coming to an end.
While there is debate about the China's ultimate objectives and real capabilities in building a blue water navy ultimately featuring five aircraft carriers, the implications of the first tests of the Jian 20 stealth fighter left little doubt. Revealed just in time for Defense Secretary Robert Gates' visit to Beijing, the images surprised even U.S. officials already aware of the jet's development. As the Wall Street Journal explained Thursday:

The photographs, published on several unofficial Chinese and foreign defense-related websites, appear to show a J-20 prototype making a high-speed taxi test--usually one of the last steps before an aircraft makes its first flight--according to experts on aviation and China's military...
Many more experts say they believe the pictures and the aircraft are authentic, giving the strongest indication yet that Beijing is making faster-than-expected progress in developing a rival to the U.S. F-22--the world's only fully operational stealth fighter.

With deployment of the J-20 still years away, U.S. defense officials suggest the development is not a cause for alarm. "It is not of concern that they are working on a fifth-generation fighter," Marine Colonel and Pentagon spokesman Dave Lapan announced, since the Chinese are "still having difficulties with their fourth-generation fighter." 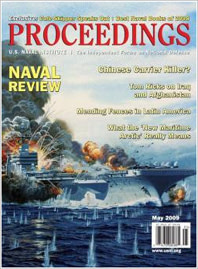 U.S. naval planners are scrambling to deal with what analysts say is a game-changing weapon being developed by China - an unprecedented carrier-killing missile called the Dong Feng 21D that could be launched from land with enough accuracy to penetrate the defenses of even the most advanced moving aircraft carrier at a distance of more than 1,500 kilometers (900 miles).

What the Chinese proudly call "carrier killers" will alter U.S. calculus in the Pacific. " As Patrick Cronin of the Center for a New American Security put it, "The emerging Chinese antiship missile capability, and in particular the DF 21D, represents the first post-Cold War capability that is both potentially capable of stopping our naval power projection and deliberately designed for that purpose."
In a September 2009 speech, Secretary Gates acknowledged the growing challenge:

When considering the military-modernization programs of countries like China, we should be concerned less with their potential ability to challenge the U.S. symmetrically - fighter to fighter or ship to ship - and more with their ability to disrupt our freedom of movement and narrow our strategic options. Their investments in cyber and anti-satellite warfare, anti-air and anti-ship weaponry, and ballistic missiles could threaten America's primary way to project power and help allies in the Pacific - in particular our forward air bases and carrier strike groups. This would degrade the effectiveness of short-range fighters and put more of a premium on being able to strike from over the horizon - whatever form that capability might take.

A 2008 study by Rand Corp. asserts that, based on current trends, the U.S. by 2020 would lose a military conflict with China over Taiwan. A recent war game by an Australian think tank confirmed that finding, assessing that the number of Chinese planes would overwhelm U.S. forces, Aviation Week magazine said.
Skeptics argue that the U.S. has little to fear militarily from a country that is its second-largest trading partner and biggest debt holder. They also note that China still lags in certain key technologies: It hasn't been able to produce its own fighter jet engines, for example, and still buys them from Russia.
But the Pentagon is concerned about China's expanding military prowess. In little-noticed remarks last month, Assistant Secretary of Defense Wallace "Chip" Gregson said China "is pursuing a long-term, comprehensive military buildup that could upend the regional security balance."

Regardless, the J-20 and Dong Feng are just the latest signs of Chinese muscle flexing, both military and non-military. As the Washington Post reported, "China sent navy vessels and military aircraft closer to Japanese territory last year than ever before." Meanwhile, Beijing is clamping down on its exports of rare earth metals critical to the manufacture of high tech product components for civilian and military use alike. By last summer, the Obama administration signaled it would push back against America's greatest strategic competitor and largest creditor:

Faced with a Chinese government increasingly intent on testing U.S. strength and capabilities, the United States unveiled a new policy that rejected China's claims to sovereignty over the whole South China Sea. It rebuffed Chinese demands that the U.S. military end its longtime policy of conducting military exercises in the Yellow Sea. And it is putting new pressure on Beijing not to increase its energy investments in Iran as Western firms leave.

Coinciding with Gates' proposed $78 billion in cuts to the Pentagon budget, the Chinese stealth aircraft revelations will heat up the debate over U.S. defense spending in general and the F-35 and F-22 fighter programs in particular. No doubt, managing the simultaneous U.S. economic partnership and strategic rivalry with China will be a delicate balancing act for President Obama and his successors. And it will be made harder by a balance of power that is tilting away from Washington.