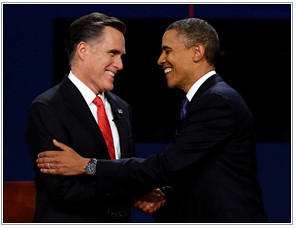 On Thursday, President Obama as promised will host Mitt Romney in a private lunch meeting at the White House. There, a magnanimous Obama should offer a parting gift to the small man who accused him of buying reelection by dispensing "gifts" to women, African-Americans, Hispanics, college students and other self-proclaimed "victims" supposedly comprising the 47 percent of voters demanding "free stuff." Obama's farewell present to the man who has almost everything should be the one thing Mitt Romney needs most: a legacy.
A gift that great deserves a special name. Call it the "Mitt Romney Tax Fairness and Debt Reduction Legacy Act."
For Mitt Romney, that legacy-building can't start soon enough. Three weeks after his defeat, it's as if he was never here, a pimple on the ass of American politics that was painful while it lasted but forgotten once it disappeared. Blamed by his party and mocked by his allies, Romney has no office to return to or constituency to fall back on. Never a middle-aged statesman, he can't be an elder statesman now. His stint at the Winter Olympics notwithstanding, Mitt apparently believes that charity begins at home and ends with the membership of church. And having reversed himself on virtually issue, including his signature health care reform in Massachusetts, Governor Romney erased any policy footprints he might have left behind. Soon, Mitt Romney's only lasting mark may be the altogether fitting 47 percent of the popular vote he managed to win.
All of which is why the vanquished Republican should be so grateful to have President Obama affix his name to the Mitt Romney Tax Fairness Legacy Act (MRTFDRLA). With that, Romney not only could change his image from what tax expert Jack Blum called the "poster child of what's wrong with the American tax system" into an icon of fairness and reform, but slash hundreds of billions of dollars from what he deemed an "immoral" national debt.
The MRTFDRLA begins by letting upper-income tax cuts end, which the nonpartisan Congressional Budget Office and Congressional Research Service agree will have virtually no impact on U.S. economic growth. That should also pose no problem for Romney, who after all pockets virtually no income from actually working. (As he pointed out during the campaign, "I'm also unemployed." Besides, the $374,000 he earned in 2010 from speaking fees in 2010 "isn't very much.) For Mitt, the return of the top rate from 35 percent to 39.6 percent in 2013 will be akin to a rounding error.
The restoration of the 20 percent Clinton-era capital gains tax rate from its current 15 percent shouldn't very distasteful, either (even if you believe like Mitt Romney that today's rate is "fair.") After all, studies show that lower capital gains taxes don't produce greater investment, but instead larger income inequality. Besides, Romney amassed much of his fortune during his tenure as Bain Capital CEO which he says concluded in 1999 (depending on when you ask), a time with higher capital gains tax rates than today.
Speaking of Bain Capital, Mitt Romney would doubtless claim he "built that." Which is why he should have be just fine with proposals to limit the two tax breaks that most observers assert made his private equity industry possible. The "carried interest exemption" lets Romney's ilk pay only capital gains tax rates on the income they make investing and managing other people's money. And the corporate debt interest deduction makes it possible for private equity firms like Bain Capital to reap millions in profits even as they saddle companies they acquire with staggering--even bankrupting--amounts of debt. As an almost remorseful Romney explained to the New York Times in 2007:

"It is one thing that if I had a chance to go back I would be more sensitive to," Mr. Romney said. "It is always a balance. Great care has got to be taken not to take a dividend or a distribution from a company that puts that company at risk." He added that taking a big payment from a company that later failed "would make me sick, sick at heart."

In that case, taxing dividends as regular income should be just what the doctor ordered for Mitt Romney.
The Mitt Romney Tax Fairness and Debt Reduction Legacy Act should also be embraced by Mitt's family. Limiting their charitable deduction rate (to, say, 28 percent as President Obama proposes) shouldn't be a new experience for the Romneys. After all, in his 2011 return Romney did not claim the full charitable tax break to which he was entitled (claiming only $2.25 million of the $4 million he donated) in order to keep his earlier promise about always paying at least a 13 percent rate. Besides, his wife Ann Romney explained that their church tithing has nothing to do with Uncle Sam:

"I love tithing. When Mitt and I give that check, I actually cry.
I know this money is an indication of how much we trust God and love the principle of sacrifice. And it teaches us not to be too, too tied to the things of the world. And it is a very good reminder of how blessed we really are, and most of those blessings do not come from a financial source, but from the power above."

That's not the only measure saving the U.S. Treasury hundreds of billions of dollars over the next decade that the Romney clan could come to love. The same goes for the estate tax. As you'll recall, candidate Romney called for eliminating the estate tax and thereby save his heirs an estimated $80 million--and those of just 43 billionaire backers $72 billion more. If President Obama succeeds in pegging the estate tax at its 2009 level (45 percent on individual fortunes larger than $3.5 million), the impact on the five Romney sons would be akin to their father spending $45 million of his own money on his failed 2008 campaign. Of course, having the tax-free, $100 million IRA their dad set up for them makes that pill easier to swallow. As Matt Romney put it:

"I don't ever expect to see any of that anyways. I don't think any of us kids are counting on that money. If my dad decides to use the money he's made, than we support him."

So if their dad decides to use some of the money he's made to pay his fair share of taxes and help his fellow Americans reduce their national debt, Matt, Tagg and the gang should support him. None of those kids were counting on that money, anyway.
Of course, to support all of these provisions of the Mitt Romney Tax Fairness and Debt Reduction Legacy Act, Romney would have to renounce his entire 2012 tax plan. But over the past decade, Romney has already reversed himself on health care reform, abortion, climate change, immigration, gay rights and virtually everything else. As he rapidly vanishes from the national consciousness, the only monument left standing to Mitt Romney may be his very amorality. As Garry Wills explained:

What lessons will Romney have to teach his party? The art of crawling uselessly? How to contemn 47 percent of Americans less privileged and beautiful than his family? How to repudiate the past while damaging the future? It is said that he will write a book. Really? Does he want to relive a five-year-long experience of degradation? What can be worse than to sell your soul and find it not valuable enough to get anything for it? His friends can only hope he is too morally obtuse to realize that crushing truth. Losing elections is one thing. But the greater loss, the real loss, is the loss of honor.

President Obama can't help Mitt Romney with that. But on Thursday, he can offer Romney the next best thing: the gift of a legacy.
If only Mitt Romney would accept it.