Process Crimes, Perjury Traps, and the Criminalization of Politics: The legacy of George H.W. Bush

The passing of President George H.W. Bush this week presented Americans with an opportunity to reflect on a life lived in service to the United States. A child of privilege, at age 18 Bush nevertheless volunteered for the military after Pearl Harbor. A bomber pilot who survived after his plane was shot down, Bush would go on to become a congressman, director of the Central Intelligence Agency, vice president, and, ultimately, president of the United States. As president, he mobilized an international coalition to eject Saddam Hussein from Kuwait and presided over the fall of the Soviet Union and the collapse of the Iron Curtain. After leaving the White House, his work with Bill Clinton on tsunami relief and recovery projects in the wake of other natural disasters brought help to millions even as it cast a positive light on the United States of America. 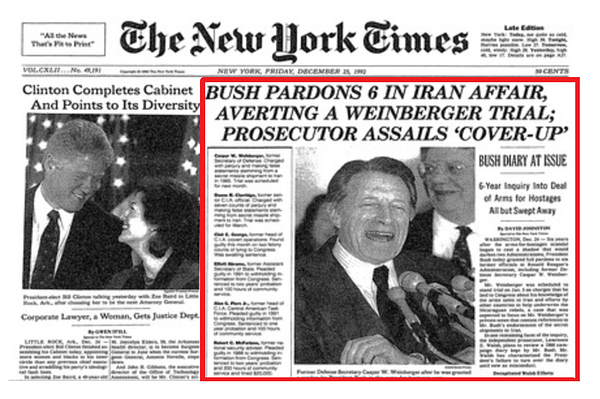 But the hagiographies of the moment should not obscure George H.W. Bush's disservice to the nation. Bush, who as a Senate candidate opposed the "radical" Civil Rights Act of 1964 "passed to protect 14 percent of the people," was just one in the 50--year roster of Republicans who benefitted from sinister racial politics. The same man who in 1980 rightly mocked Ronald Reagan's promise to slash taxes, raise defense spending, and balance the budget as "voodoo economics" only eight years later declared "read my lips: no new taxes" even as the national debt tripled in the interim. Out of touch with the AIDS crisis and a faltering economy at home, President Bush urged Iraqi Shiites and Kurds to rise up against Saddam Hussein, only to stand by as 100,000 were slaughtered after responding to his clarion call.
But of all the blemishes on the decidedly mixed record of President George Herbert Walker Bush, no stain is more indelible than his Christmas 1992 pardons of six key players from the Iran-Contra scandal. With that move, Bush didn't merely intervene in an ongoing investigation in which he was a subject. It was Poppy Bush who introduced an expression into the American political lexicon-- "the criminalization of policy differences"--which would become the go-to defense for virtually all Republican criminality and wrongdoing ever since. From the outing of covert CIA operative Valerie Plame and the purge of U.S. attorneys to his son's regime of detainee torture and now the myriad Trump-Russia scandals, Bush's despicable "criminalization of politics" cry lives on.
Continue reading at Daily Kos.