R is for Recess Appointment - and Republican 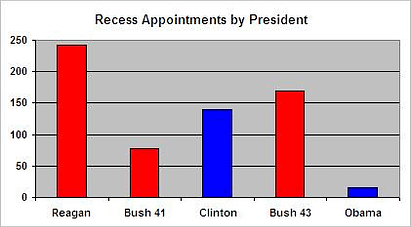 Republicans are predictably apoplectic about the 15 recess appointments announced by President Obama this weekend. John McCain, who in 2005 praised George W. Bush's appointment of John Bolton as UN Ambassador as "the president's prerogative,"blasted Obama for showing "little respect for the time honored constitutional roles and procedures of Congress." Jim Demint accused the President of "mocking Americans" with his selections of "some pretty radical folks."
As it turns out, the Republican hypocrisy is double. While the GOP's obstruction of Obama's nominees is not only unprecedented, the use of recess appointments is itself a staple of Republican presidents.
The numbers tell the tale. President Obama batch of recess appointments still leaves him well behind the pace of his recent predecessors. While George H.W. Bush made 77 such appointments, the two-term presidents leave Obama in the dust. As John Judis noted in the New Republic before the announcement of Obama's choices for the National Labor Relations Board (NLRB) and other posts:

That means they could serve about a year and a half--until the end of the Senate's term--as George W. Bush's UN ambassador, John Bolton, did. If they are not confirmed at the end of that period, they can serve another two years, but without salary. Ronald Reagan made 243 recess appointments, Bill Clinton 140, and George W. Bush 171. In fact, Bush made seven recess appointments to the NLRB.

For its part, the Obama administration made clear that Republican stonewalling left the President little choice in filling the massive backlog of federal posts it produced:

To put this in perspective, at this time in 2002, President Bush had only 5 nominees pending on the floor. By contrast, President Obama has 77 nominees currently pending on the floor, 58 of whom have been waiting for over two weeks and 44 of those have been waiting more than a month. And cloture has been filed 16 times on Obama nominees, nine of whom were subsequently confirmed with 60 or more votes or by voice vote. Cloture was not filed on a single Bush nominee in his first year. And despite facing significantly less opposition, President Bush had already made 10 recess appointments by this point in his presidency and he made another five over the spring recess.

No case illustrates the cynical Republican gambit better than its behavior towards NLRB pick Craig Becker. Becker, a lecturer at the University of Chicago Law School as well as a counsel for the SEIUand AFL-CIO, got a 15-8 blessing from the Senate Health, Education, Labor, and Pensions (HELP) committee last year. That margin included the support of Republicans Mike Enzi and Lisa Murkowski. But when John McCain put a hold on the nomination, Becker's chances in 2009 died.
Obama renominated Becker when Senate Minority Leader Mitch McConnell in January finally agreed to remove the Republican holds on most of the President's appointees. But that wasn't the only thing that changed. HELP committee Republicans not only inundated Becker with a 400-question survey to complete (longer than that presented to Sonia Sotomayor). Enzi and Murkowski withdrew their support and joined the GOP filibuster against him. As Judis lamented:

What happened next says a lot about the sorry state of politics in Washington...The motion on cloture, which took place during a snowstorm that kept members out of Washington, still got 52 votes compared to only 33 in favor of maintaining the filibuster; but it was not enough for Becker's nomination to proceed to the floor.

Before receiving recess appointments this weekend, Craig Becker and Mark Pearce had been waiting 261 days.
For his part, South Carolina Republican Jim Demint showed he lacks the embarrassment gene. After health care reform turned into a Republican Waterloo last week, Demint on Monday penned an op-ed blasting President Obama's "Top 10 Failed Nominees." The GOP's record-setting obstructionism, of course, went unmentioned, as did Demint's past support for extremist Bush recess appointees like John Bolton and Sam Fox (the Swift Boat funder and GOP contributor tapped as U.S. Ambassador to Belgium). As for Bush Homeland Security choice Bernard Kerik, for Demint and the Republicans he is out of sight, out of mind and in jail.