Republicans' Lesson for Democrats: Next President Must "Look Backwards" at GOP Crimes

If nothing else, Republicans over the past few weeks have delivered an important civics lesson to the American people in general--and Democrats in particular. Facing a growing mountain of irrefutable evidence that the incompetent, out-of-his-depth GOP president of the United States has been enmeshed in a network of ties to Russian business and government interests that put American institutions and democracy itself at risk, the GOP rallied not to the nation's defense, but Donald Trump's.
The signs of the expanding counterattack are everywhere. For weeks, special counsel Robert Mueller and senior career personnel at the Justice Department and FBI have been under assault from Republicans in both Houses. Calls to investigate Mueller and "purge" the FBI were followed by the specter of GOP Sens. Lindsey Graham and Chuck Grassley referring Russia dossier author Christopher Steele for charges over unspecified lies made to unnamed government investigators. (The transcript of the Fusion GPS Senate testimony released by California Democrat Dianne Feinstein suggests both why Grassley broke his promise to publish it and the smear campaign underway against Steele.) Meanwhile, the Trump White House and its allies are ramping up their attacks on Hillary Clinton, the former secretary of State who left government service in 2013. The Republicans' misdirection campaign includes the assignment by FBI agents to probe the 2010 Uranium One non-scandal, supposed "pay to play" influence peddling by the Clinton Foundation, and, of course, "her emails."
The message from the GOP's best and brightest is unmistakable. For starters, it turns out Republicans are just fine with a president who leads from behind, provided the president is Vladimir Putin and the behind is Donald Trump's. Just as important, Republicans are only to happy to advocate "the criminalization of politics," just as long as the politician in question is, like Hillary Clinton, a Democrat. And in their quest to deflect attention from real crimes to imagined ones, Republicans won't hesitate to "look backwards" at past Democratic administrations to rev up their base and hijack media attention.
Let that be a lesson for Democrats. 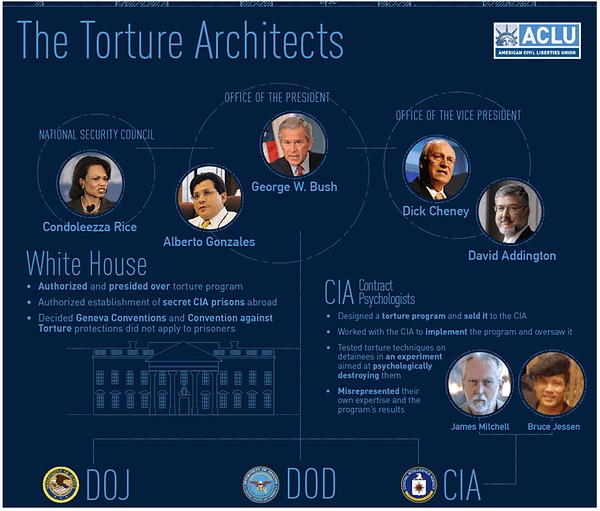 In 2009, Republican politicians and the conservative commentariat warned the newly inaugurated President Barack Obama not to prosecute the architects of the Bush administration's regime of detainee torture. Despite the clear violations of U.S. and international law committed by the authors of America's so-called "enhanced interrogation techniques," right-wingers screamed that any investigation of President Bush, Vice President Cheney, and the likes of Condi Rice, John Yoo, David Addington, and Jose Rodriguez would constitute "presidential poison" and "the criminalization of conservatism." Dick Cheney took to the airwaves to dare the Justice Department to come after him and his henchmen. With the country he inherited teetering on the brink of economic catastrophe, President Obama and Attorney General Holder backed down in the face of the GOP's scorched earth threats. Obama would not "look backwards" at American torture under President Bush and thus risk "the criminalization of policy differences."
And to be sure, what the United States had done was torture.
Continue reading at Daily Kos.