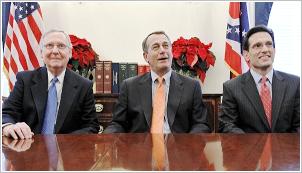 The USA Patriot Act defines "domestic terrorism" in part as activities intended "to intimidate or coerce a civilian population; to influence the policy of a government by intimidation or coercion; or to affect the conduct of a government by mass destruction, assassination, or kidnapping." By that standard, the current GOP campaign of budgetary hostage-taking over the U.S. debt ceiling is tantamount to economic terrorism. After all, Republicans are threatening financial ruin for the United States and the global economy if their demands for draconian budget cuts are not met.
It comes as no surprise that Obama administration officials have for months warned of the dire consequences if the United States defaults -or even comes to close to defaulting on its obligations. Earlier this week, Treasury Secretary Tim Geithner cautioned "you can't play around" with the debt ceiling. President Obama explained that the failure by Congress to raise the U.S. debt limit "could plunge the world economy back into recession." And in January, Obama economic advisor Austan Goolsbee explained, "If we get to the point where you've damaged the full faith and credit of the United States, that would be the first default in history caused purely by insanity," and added:

"This is not a game. You know, the debt ceiling is not something to toy with. ... If we hit the debt ceiling, that's essentially defaulting on our obligations, which is totally unprecedented in American history. The impact on the economy would be catastrophic. I mean, that would be a worse financial economic crisis than anything we saw in 2008."

As it turns out, the Republican extortionists have been saying pretty much the same thing.
In early January, House Budget Committee Chairman Paul Ryan acknowledged, "you can't not raise the debt ceiling." That same week, Senator Lindsey Graham admitted, "Let me tell you what's involved if we don't lift the debt ceiling: financial collapse and calamity throughout the world. That's not lost upon me." And incoming Speaker John Boehner, who in November warned members of his own party "Whether we like it or not, the federal government has obligations and we have obligations on our part," by January was also crystal clear about what failure to give in to Republican blackmail:

"That would be a financial disaster, not only for our country but for the worldwide economy. Remember, the American people on election day said, 'we want to cut spending and we want to create jobs.' And you can't create jobs if you default on the federal debt."

Nevertheless, as Politico reported earlier this month, Boehner is planning to hold the American economy hostage.

"The president says I want you to send me a clean bill," Boehner said. "Well guess what, Mr. President, not a chance you're going to get a clean bill."
"There will not be an increase in the debt limit without something really, really big attached to it," he continued in a clip of his remarks at a fundraiser that was played during "Face the Nation."

Boehner's "something really, really big" is the Republican ransom note. It includes the Ryan budget passed by the House, which guts Medicaid, ends Medicare and delivers $4 trillion in tax cuts (including $1 trillion in yet another windfall for the wealthy) while still adding $6 trillion in debt over the next decade. The GOP demands, as Mitch McConnell made clear, also include a balanced budget amendment to the Constitution and steep cuts to Medicaid, Medicare and Social Security.
As it turns out, the U.S. economy will be tortured whether the Republican ransom is paid or not.
Even if the Ryan roadmap became law, Republicans would nevertheless have to vote to increase the national debt several times over the next two decades. As the Washington Post's Ezra Klein again pointed out, the Ryan plan fails every GOP balanced budget amendment proposal and all Republican schemes to cap spending at 18% or 21% of American gross domestic product (GDP). And as McCain economic adviser Mark Zandi explained:

But if the debt ceiling isn't raised, Zandi warned the consequences would be much, much worse:

"The cornerstone of the global financial system is that the United States will make good on its debt payments. If we don't, we've just knocked out the cornerstone, and the system will collapse into turmoil."

In response, some of the Republican budget jihadists are pretending that with a little budgetary sleight of hand, the cataclysm that would be a U.S. default need not be so, well, cataclysmic. Pennsylvania Senator Pat Toomey criticized Treasury Secretary Tim Geithner for "doomsday predictions that could only materialize at his own hand." Instead, Toomey claims, the Obama administration should back his bill which "would require the Treasury to prioritize payments on our debt in the event the debt ceiling is not raised, thus ensuring the U.S. government does not default." White House hopeful Michele Bachmann (R-MN) similarly declared we don't raise the debt ceiling, but we use the revenue still coming in to pay off creditors first and whatever we think most important second. That way, we "don't violate our credit rating" and "prioritize our spending."
Ezra Klein described Bachmann's fantasy as "the scariest thing I've ever heard on television."

It makes perfect sense unless you, like me, had spent the previous few days talking to economists, investors and economic policymakers about what could happen if we start playing games with the debt ceiling. Their answers were across-the-board apocalyptic. If the U.S. government is so incapable of solving its political problems that it can't come to an agreement on the debt ceiling, they said, that's basically the end of the United States as the world's reserve currency. We won't be considered safe enough to serve as the investment of last resort. We would lose the most important advantage our economy has in the global financial system -- and we'd probably lose it forever. Skyrocketing interest rates would slow our economy and, in real terms, make it even harder to pay back our debt, which would in turn send interest rates going even higher. It's an economic death spiral we associate with third-world countries, not with the United States.

Writing in Slate, Annie Lowrey paints a similarly disturbing picture of the aftermath of the Republicans' debt ceiling terrorism:

Within 72 hours, Congress has a deal on President Obama's desk, raising the ceiling to $16 trillion in exchange for balanced budgets to take effect in fiscal-year 2015 and some serious cuts now. Treasury starts issuing new bonds and making all payments on existing ones. But the market panic requires the Federal Reserve to reboot its emergency programs, disrupts the housing market, permanently raises the United States' borrowing costs, reshapes the world bond market, and shaves more than a percentage point off GDP growth--enough to throw the economy back into recession. Globally, investors no longer consider the dollar the reserve currency of choice.

When it comes to the potential damage caused by the Republican economic suicide bombers, Americans don't need to take Annie Lowrey's or Ezra Klein's word for it. Over the past several days, the U.S. Chamber of Commerce, Wall Street executives, the National Association of Manufacturers and a host of the GOP's other big business allies have warned the Republican leadership that the party's grandstanding risks an economic calamity for the United States. As The Hill reported, the same business backers who bankrolled the GOP's overwhelming victories in November has had enough of the fear, uncertainty and doubt coming from Messrs.' McConnell, Boehner and Cantor:

The Obama administration will likely have the support of major business groups as it works to round up Republican votes for raising the federal debt ceiling.
Groups such as the National Association of Wholesaler-Distributors (NAW), the U.S. Chamber of Commerce and the National Association of Manufacturers (NAM) plan to step up their advocacy for a debt-limit increase as the deadline for congressional action draws closer.
Lobbyists for several major trade associations told The Hill that they have already had discussions with first-term House Republicans about the necessity of lifting the debt ceiling to avoid a default on U.S. debt.

As one Wall Street executive described the carnage Republicans are about to cause:

"They don't seem to understand that you can't put everything back in the box. Once that fear of default is in the markets, it doesn't just go away. We'll be paying the price for years in higher rates."

To combat the GOP hostage takers on Capitol Hill, Matthew Yglesias suggested a tried and true maxim for Democrats: no negotiations with terrorists. But given President Obama's penchant for a priori concessions, such a hard line from the White House seems unlikely.
Sadly, recent polling suggests that the American people are falling victim to a kind of Stockholm Syndrome on the issue. Despite the national economic suicide which would ensue, CBS poll respondents opposed raising the debt ceiling by over a 2-1 margin.
Meanwhile, Republicans like Sarah Palin continue to blast President Obama as being "hell-bent on weakening America." Of course, when it comes to the debt ceiling, she's the one palling around with terrorists.