With another government shutdown averted by this week's two-year budget compromise, Republican leaders are once again threatening to hold the debt ceiling hostage if their demands aren't met. So what if they don't know yet what those demands will be? House budget chief Paul Ryan insisted, "We as a caucus -- along with our Senate counterparts -- are going to meet and discuss what it is we're going to want out of the debt limit. We don't want nothing out of this debt limit." Senate Minority Leader Mitch McConnell echoed that threat to the looming March deadline to raise Uncle Sam's borrowing authority, declaring, "I can't imagine it being done clean." His number two, John Cornyn of Texas, reiterated the GOP's TBD ransom note, warning "The plan is no clean debt ceiling."
For his part President Barack Obama used his press conference Friday to announce that he would not be blackmailed. "No," he responded, "we're not going to negotiate."
And why should he? After all, back in 2004 Ryan, McConnell, Cornyn and the other GOP leaders now refusing to give President Obama a "clean" debt ceiling bill gave Republican President George W. Bush exactly that.

That October, Bush called for his fourth hike in the nation's borrowing authority. His Treasury Secretary John Snow warned, "Given current projections, it is imperative that the Congress take action to increase the debt limit by mid-November," adding that his arsenal of fiscal tools, including tapping money intended for the civil service retirement fund, "will be exhausted."
House Speaker John Boehner's predecessor Dennis Hastert made it clear that President Bush had nothing to worry about. As the Washington Post recounted that October:

"Typically with Congress, they do it when they need to do it," said John Feehery, spokesman for House Speaker J. Dennis Hastert (R-Ill.). "And we'll do it when we need to do it."

And do it they did. But as the New York Times explained on November 17, 2004, Bush had to wait for his debt ceiling increase for a very simple reason:

Though an increase in the debt ceiling was never in doubt, Republican leaders in both houses of Congress postponed action on it last month, until after the elections, to deprive Democrats of a chance to accuse them of fiscal irresponsibility.

The ironies in that 2004 debt limit expansion didn't end there. Democrats rightly "noted that Bush's 2001 budget anticipated the debt ceiling would not have to be raised until 2008." By the time Bush left office in January 2009, the U.S. national debt had nearly doubled. And as it turned out, John Boehner, Mitch McConnell, Eric Cantor, Paul Ryan and John Cornyn along with Speaker Hastert and Senate Majority Leader Bill Frist needed to enable President Bush to borrow more money to pay for his massive new health care program, the Medicare drug benefit.

All told, with his Treasury-draining tax cuts, two wars, TARP and the unfunded Medicare prescription drug plan, Bush ultimately needed to raise the nation's borrowing authority seven times as nearly doubled the national debt. And the GOP brain trust in Congress of Mitch McConnell, John Cornyn, John Boehner, Paul Ryan and Eric Cantor voted for all of it. As Utah Senator Orrin Hatch explained their collective behavior during the Bush years:

"It was standard practice not to pay for things."

Nevertheless, Capitol Hill Republicans are once again threatening to hold the debt ceiling hostage. Throughout 2013, their demands have changed, with the ransom for raising the debt limit being variously set at the repeal of Obamacare, adoption of the Ryan House GOP budget, implementing tax reform, green-lighting the Keystone XL pipeline, curbing new federal regulations and even enacting draconian new abortion restrictions. Over just the past week, Chairman Ryan has named the XL pipeline as his the price of his blackmail and Wisconsin Senator Ron Johnson added Obamacare changes to the list, while Senators McConnell and Cornyn demanded further spending cuts to end their extortion scheme.
All the while, the United States faces no debt crisis in either the near or medium term. Speaker Boehner admitted as much in March, declaring "we have no immediate debt crisis." Paul Krugman looked at the charts and went a step further, concluding "It's not even a picture of a crisis."

After slashing $2.5 trillion from the next decade's red ink in just the past two years, the U.S. national debt as a percentage of the American economy has stabilized. It is worth noting that only about a quarter of the deficit reduction comes from new revenues. (If all of the Bush tax cuts had been allowed to expire as part of January's fiscal cliff deal, U.S. debt would plummet from around 70 to about 50 percent of GDP.) May's 2013 deficit projection was now $642 billion, half the level Barack Obama faced on the day he first took the oath of office in 2009. As the nonpartisan Congressional Budget Office (CBO) explained just last month, for the next decade U.S. national debt will remain at sustainable, stable levels. 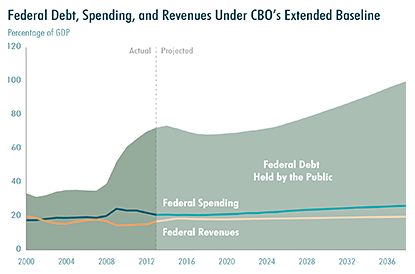 That was the nutshell summary from October. Since then, the picture has only improved as tax revenues have grown faster than expected even as the Ryan-Murray budget plan locks in historically non-defense discretionary spending for the next two years. With American economic recovery still fragile, now is no time to threaten to block a once-routine debt ceiling hike and trigger a cataclysmic U.S. default.
Of course, the GOP brain trust knows this. "You can't not raise the debt ceiling," Ryan has admitted, because that would produce, in John Boehner's words, "a financial disaster, not only for our country but for the worldwide economy."
But in 2014, Republicans seem determined to sabotage the American economy simply because they can.