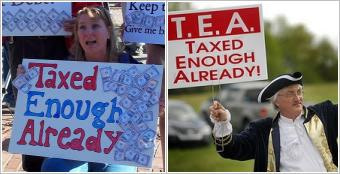 On Monday, the New York Times asked, "What if a president cut Americans' income taxes by $116 billion and nobody noticed?" As it turns out, that question neatly sums up the sad dynamic at play in the 2010 midterm elections. On the one hand, President Obama and his Democratic allies have utterly failed to tout the tax cuts delivered as promised to 95% of working households. On the other, Republican mythmaking and Tea Party fury have succeeded in drowning out both the Democrats' message - and the truth.
Stephen Colbert famously declared that "reality has a well-known liberal bias." But not, the New York Times explained, when no one is paying attention to it.

In a troubling sign for Democrats as they head into the midterm elections, their signature tax cut of the past two years, which decreased income taxes by up to $400 a year for individuals and $800 for married couples, has gone largely unnoticed.

In a New York Times/CBS News Poll last month, fewer than one in 10 respondents knew that the Obama administration had lowered taxes for most Americans. Half of those polled said they thought that their taxes had stayed the same, a third thought that their taxes had gone up, and about a tenth said they did not know. As Thom Tillis, a Republican state representative, put it as the dinner wound down here, "This was the tax cut that fell in the woods -- nobody heard it."

Of course, it was impossible to hear about what Steve Benen deemed the largest two-year tax cut in American history over the jet-engine decibel level of right-wing rage, a cacophony willingly amplified by the media. Among the almost endless Tea Party delusions about Obama's birth, his religion, death panels, "keeping government out of Medicare" and so much more, the Tea Bagger fraud that income taxes have gone up under President Obama is perhaps the most successful.
Another CBS News poll in February revealed the mass delusion of the American people in general and Tea Baggers in particular when it comes to the Obama tax cuts. A quarter of respondents said the Obama administration increased taxes while 53% said they were unchanged. Only 12% rightly answered that federal income taxes had come down under President Obama.
But among the confused Tea Party crowd, the belief is akin to asserting the sun orbits the earth:

It's no wonder that former Reagan Treasury official Bruce Bartlett aptly concluded, ""For an antitax group," Bartlett aptly concluded, "they don't know much about taxes."
And he was understating the case. While frothing-at-the-mouth right-wingers rage about "No Taxation without Representation" and being "Taxed Enough Already," the Bureau of Economic Analysis concluded in May that that Americans paid the smallest overall tax bill since Harry Truman was in the White House. USA Today summed up the BEA data debunking yet another right-wing myth:

Federal, state and local taxes -- including income, property, sales and other taxes -- consumed 9.2% of all personal income in 2009, the lowest rate since 1950, the Bureau of Economic Analysis reports. That rate is far below the historic average of 12% for the last half-century. The overall tax burden hit bottom in December at 8.8% of income before rising slightly in the first three months of 2010.

"The idea that taxes are high right now is pretty much nuts," says Michael Ettlinger, head of economic policy at the liberal Center for American Progress.

That conclusion echoed a similar finding from the Center on Budget and Policy Priorities in April. CBPP found.
Middle-income Americans are now paying federal taxes at or near historically low levels, according to the latest available data. That's true whether it comes to their federal income taxes or their total federal taxes.
There are a multitude of explanations for Americans' ignorance of their payday from President Obama. The tax relief was embedded in their paychecks and not a much-hyped wave of checks from Washington. And the Making Work Pay and other tax credits were part of the overall $787 billion stimulus program.
But as with the success of the stimulus itself (which hundreds of Republican requests for job-creating funds revealed this week once again confirmed), the GOP media apparatus has completely obliterated the truth. Now, the same Republicans calling for yet another $700 billion tax cut windfall for the wealthy are lying about President Obama's proposed tax relief for 98% of Americans, instead falsely claiming Democrats seek "an across the board, $3.8 trillion tax hike."
As the New York Times reported this week, Charlotte tax protester Bob Paratore admitted, "you're right, you're right" when reminded that a provision of the stimulus bill had cut taxes for 95 percent of working families by changing withholding rates. All of which suggests the two words right-wingers should be saying to President Obama shouldn't be "socialist" and "tyrant," but instead "thank you."