Before departing on his trip to tout America's Anglo-Saxon heritage in the UK, Poland and Israel, Mitt Romney used an address to the Veterans of Foreign Wars (VFW) to deliver a blistering attack on President Obama. Blistering and, of course, duplicitous. Romney accused President Obama of "massive defense cuts," ignoring that much of the "arbitrary, across-the-board budget reduction that would saddle the military with a trillion dollars in cuts" was blessed by Republicans in Congress. More despicable still, the Republican charged that the current President of the United States "do[es] not want America to be the strongest nation on earth."
But if this line of attack sounds hauntingly familiar, it should, and not just because Mitt Romney has been regurgitating the same talking points for months. As it turns out, Romney is trying to follow George W. Bush's path to the White House by slandering his Democratic rival for producing a "hollow military." 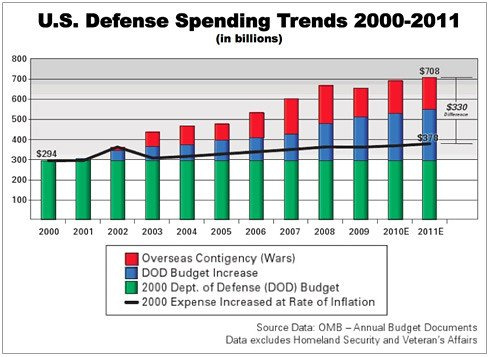 As the chart above shows, core U.S. defense spending (that is, outside of Iraq and Afghanistan war funding in red) has risen during every year of the Obama administration. Nevertheless, Mitt Romney announced last fall, "I will reverse President Obama's massive defense cuts." Then during the May NATO summit in Chicago, Romney penned an op-ed to charge:

"The United States [is] on a path to a hollow military."

That line just happened to be a centerpiece of Texas Governor George W. Bush's successful campaign 12 years ago.
Back in 2000, then candidates Bush decimated Vice President Gore over his much-hyped claimed that the Clinton administration had gutted the U.S. armed forces. Speaking at the Citadel in the fall of 1999, Bush lambasted President Clinton:

"Not since the years before Pearl Harbor has our investment in national defense been so low as a percentage of GNP. Yet rarely has our military been so freely used."

"For eight years, Clinton and Gore have extended our military commitments while depleting our military power. Rarely has so much been demanded of our armed forces, and so little given to them in return...And I can promise them now, help is on the way."

The next night, the newly anointed 2000 Republican presidential nominee George Bush uttered the phony phrase that came to define the GOP myth of the hollow military (around the 1:30 mark):

"We have seen a steady erosion of American power and an unsteady exercise of American influence. Our military is low on parts, pay and morale. If called on by the commander-in-chief today, two entire divisions of the Army would have to report, 'Not ready for duty, sir.'"

As Joshua Micah Marshall documented four days later on August 7, 2000, Governor Bush's claims were - and he knew them to be - patently false. Those two divisions had their status temporarily downgraded for the obvious reason that they were already on duty in the Balkans:

Bush took all this a step further when he told the convention audience that two divisions were currently "not ready for duty." As a factual matter, the statement is false, as the current chairman of the Joint Chiefs of Staff, Gen. Hugh Shelton, was at pains to point out the following day...
...But the reason those two divisions had their readiness downgraded was not because they were unfit for duty or lacked equipment. It was because portions of each division were on peacekeeping duty in Bosnia and Kosovo. The military's definition of readiness has to do with a particular division's ability to go into combat immediately in the hypothetical case of two major theater conflicts breaking out simultaneously. The commanders doubted their ability to quickly extricate their troops from their positions in the Balkans.

Confronted by CNN, Bush refused to own up to his fraud and pointed a suspicious finger at the military itself:

"If the Army, in fact, changes its tune from that report...then they need to let the country know. I am amazed that they would put out a statement right after our convention. I'm curious why it took them this long to say they were combat-ready after a report last November said they weren't."

Nevertheless, Bush mobilized a large army of Republican surrogates to issue the same deceptively dire warnings about America's supposedly "hollow military." As the New Republic recounted in a September 2000 article titled "Apocryphal Now - The Myth of the Hollow Military":

George W. Bush, in a much- publicized speech to the Veterans of Foreign Wars last month, bemoaned a "military in decline." At the Republican National Convention, Gulf war hero Norman Schwarzkopf derided the Pentagon as enfeebled. The Armed Services are in a "downward spiral" (Senate Majority Leader Trent Lott), "neglected" (Senator John McCain), in "bad" shape (Representative Curt Weldon), and "could not fight and win against Iraq today" (Representative Duncan Hunter). Bush advisers routinely describe the American military as a "hollow force."

(As James Fallows documented in March 2004, the Bush administration learned that waging war on the cheap simultaneously in Iraq and Afghanistan indeed was hollowing out the U.S. Army.)
Twelve years later, Mitt Romney is hoping to repeat history and similarly lie his way to the White House.

The Romney web site declares that "President Obama has put us on course toward a 'hollow' force." (That force could have been expanded with any on Mitt's five sons, but, as he explained in 2007, "one of the ways my sons are showing support for our nation is helping me get elected because they think I'd be a great president.") Pretending the Cold War never ended (which is not surprising given Romney's later announcement that Russia is "our number one geopolitical foe"), Team Romney warns:

The Obama administration's cuts have left us with a military inventory largely composed of weapons designed forty to fifty years ago. The average age of our tanker aircraft is 47 years, of strategic bombers 34 years. While the weapons in our arsenal remain formidable, they are well along on the path to obsolescence. Along with the aging process, there has been a precipitous decline in sheer numbers. The U.S. Navy has only 284 ships today, the lowest level since 1916. Given current trends, the number will decline, and the additional contemplated cuts will cause it to decline even further. Our naval planners indicate we need 328 ships to fulfill the Navy's role of global presence and power projection in defense of American security. Our Air Force, which had 82 fighter squadrons at the end of the Cold War, has been reduced to 39 today.

Unfortunately for the man hoping to follow in Bush's footsteps, Politifact deemed Romney's claim ("Our Navy is smaller than it's been since 1917...our Air Force is smaller and older than any time since 1947") a "Pants-on-Fire" lie. Mitt's whopper didn't just backfire because, as Politifact pointed out, "each of the final four years under George W. Bush saw lower levels of active ships than any of the three years under Obama." Romney's is a ridiculous case of comparing conventional apples to nuclear oranges:

But what do those numbers mean? Not much, a variety of experts told us.
Counting the number of ships or aircraft is not a good measurement of defense strength because their capabilities have increased dramatically in recent decades. Romney's comparison "doesn't pass 'the giggle test,' " said William W. Stueck, a historian at the University of Georgia.

As it turns out, Mitt Romney's proposed Pentagon budget doesn't pass the giggle test, either.

While gutting the social safety net in order to fund yet another tax cut payday for the gilded-class, Romney wants to expand U.S. defense spending to its highest level in decades. All told, he would catapult Pentagon spending by $2.1 trillion over the next decade. As the Boston Globe noted, Romney not only fails to realize savings from the end of the U.S. war in Afghanistan, but promises Pentagon increases that simply don't square with his pledge to "Cut, Cap and Balance" the federal budget:

Romney's solution is one of the most far-ranging, expensive, and perhaps least understood of his campaign. He has vowed to commit at least 4 percent of the nation's gross domestic product - $4 out of every $100 in the nation's economy - to "core'' defense spending, not including many war expenses.
Under next year's budget, defense spending is projected to be about 3.2 percent [of GDP] - yet Romney has stuck by his 4 percent vow. Put another way, that means Romney proposes spending 61 percent more than Obama at the end of a decade-long cycle, according to the libertarian Cato Institute.
Enacting such an increase at the same time that Romney wants to slash taxes and balance the budget could cost trillions of dollars and require huge cuts in domestic programs. As Romney's website puts it matter-of-factly, "This will not be a cost-free process.''

And certainly not an honest one, because America does not have a "hollow military." But like the man he will only refer to as Barack Obama's "predecessor," Mitt Romney is counting on Americans not figuring that out until he's sitting in the Oval Office.