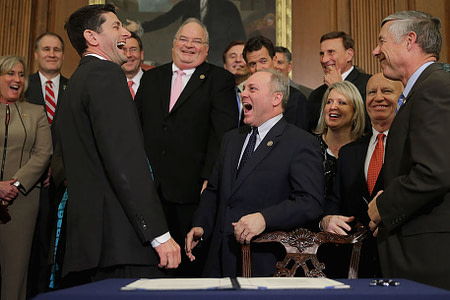 But if they were shocked--SHOCKED!--to find Steve King's racism going on in their Republican Party, they shouldn't have been. King, after all, has a long history of incendiary rhetoric aimed at African-Americans, Latinos, and other minorities. When he wasn't warning about drug-toting, undocumented immigrants with calves the size of cantaloupes, Rep. King was raising red flags about the impossibility of restoring "our civilization with somebody else's babies." On July 6, 2017, he asked if "we have the desire and the courage to preserve our civilization in the face of those who would subvert and destroy it."

And there was never any doubt whose faces he was talking about. He rose in defense of Confederate monuments and the "good people" protecting them, proclaiming the need to "save our great statues/heritage!" King denounced the "tailspin of culture" among men in "our inner cities" which was "turning the safety net into a hammock." During his 2012 re-election campaign, Congressman King joked with supporters that "no one's ever asked to see my birth certificate" and repeatedly referred to Barack Obama as "extraordinarily foreign." King called slavery "a nit" and even defended "Southern patriots like Lee, Jackson and Davis." He went so far as to call himself "David Duke without the baggage." And when he wasn't calling Barack Obama a "Halfrican-American" and a "man-child," Steve King was comparing abortion, Obamacare, the national debt, gun control, and just about every other Democratic policy he disliked to slavery.

It's no wonder Mitch McConnell responded to Steve King's be-hooding by proclaiming, "There is no place in the Republican Party, the Congress or the country for an ideology of racial supremacy of any kind." And who could blame Kevin McCarthy for this expression of revulsion?

"That is not the America I know, and it is most definitely not the party of Lincoln."

That's all well and good, except for one problem: Steve King is most definitely representative of the party of Lincoln. After all, aside from the bit about immigrants' calves and babies, the litany of race-baiting and coded odes to white supremacy above were not actually vomited up by Steve King, but by the leading lights of the Republican Party.
Continue reading at Daily Kos.