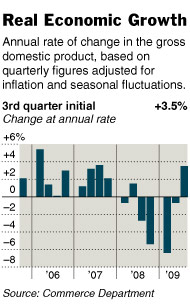 On Thursday, the Commerce Department announced that the U.S. economy expanded at a surprisingly strong 3.5% rate. But despite Q3 GDP growth which exceeded consensus estimates, the outsized impact of one-time programs including the Cash for Clunkers incentives and the tax credit for first-time home buyers suggests the pace of economic expansion will slow in succeeding quarters. And with unemployment likely to top 10%, the heated politics of the recovery and the Obama stimulus which helped fuel it will only get more contentious still.
Christina Romer, Obama's chief of the Council of Economic Advisors, announced the first GDP gains since the Bush recession that began in December 2007 turned into a downward spiral in the summer of 2008:

"After four consecutive quarters of decline, positive GDP growth is an encouraging sign that the U.S. economy is moving in the right direction."

The dramatic turnaround in the economy, which plummeted by 5.4% in the fourth quarter of last year and a ataggering 6.4% in Q1, can largely be attributed to the impact of the $787 billion American Recovery and Reinvestment Act (ARRA) and emergency steps taken to save the financial system. As the New York Times noted:

Today's good news follows the unexpectedly strong turnaround in Q2, when the small 0.7% decline in GDP showed the hemorrhaging had been cauterized. For the three month period which ended in June, the Economic Policy Institute announced the Obama stimulus measures overall added "up to 3 full percentage points of annualized growth in the quarter." For its part, the Wall Street Journal in September agreed with that assessment:

Many forecasters say stimulus spending is adding two to three percentage points to economic growth in the second and third quarters, when measured at an annual rate. The impact in the second quarter, calculated by analyzing how the extra funds flowing into the economy boost consumption, investment and spending, helped slow the rate of decline and will lay the groundwork for positive growth in the third quarter -- something that seemed almost implausible just a few months ago. Some economists say the 1% contraction in the second quarter would have been far worse, possibly as much as 3.2%, if not for the stimulus.
For the third quarter, economists at Goldman Sachs & Co. predict the U.S. economy will grow by 3.3%. "Without that extra stimulus, we would be somewhere around zero," said Jan Hatzius, chief U.S. economist for Goldman.

But going forward, the picture in economists' crystal balls looks murky, to say the least. The Cash for Clunkers program has come and gone, and the housing credit is set to expire on November 30. (The latter may yet be extended.) As the AP reported:

A top concern is whether the recovery can continue after government supports are gone.
Many economists predict economic activity won't grow as much in the months ahead as the bracing impact of Obama's $787 billion package of increased government spending and tax cuts fades.
The National Association for Business Economics thinks growth will slow to a 2.4 percent pace in the current October-December quarter. It expects a 2.5 percent growth rate in the first three months of next year, although other economists believe the pace will be closer to 1 percent.
Romer, in remarks last week said the government's stimulus spending already had its biggest impact and probably won't contribute to significant growth next year.

Despite growing exports, a 1.1% jump in business spending on equipment and inventories at "rock-bottom" levels, prospects for job growth remain sluggish. Today's 9.8% unemployment rate may reach 10.5% before hiring improves next year. It's with good reason Romer acknowledged, "we still have a long road to travel until the economy is fully recovered," adding, "The turnaround in crucial labor market indicators, such as employment and the unemployment rate, typically occurs after the turnaround in GDP."
All of which makes the Friday's White House report on American jobs saved or created by the stimulus such a political lightning rod. In early September, the Obama administration estimated that 1 million jobs could be credited to the ARRA. And a preliminary, partial investigation of by USA Today released yesterday supported that claim:

States have reported using stimulus money to create or save more than 388,000 jobs so far this year, buttressing the Obama administration's claim that the $787 billion plan has had a significant impact on the economy.
That total, based on a USA TODAY review of reports from 33 states and Puerto Rico, includes teachers, construction workers, and others whose jobs were funded by stimulus money awarded to states. The administration plans Friday to release reports from all 50 states, providing the broadest accounting yet of the stimulus plan's impact.

But certain to inflame Republicans clamoring that the stimulus had "failed" is an AP article this morning which claimed, "An early progress report on President Barack Obama's economic recovery plan overstates by thousands the number of jobs created or saved through the stimulus program." While acknowledging the errors in some of the individual job estimates, the Obama White House pushed back:

"This story draws misleading conclusions from a handful of examples," Ed DeSeve, an Obama adviser helping to oversee the stimulus program, said.
"Tomorrow, more than 100,000 recipient reports will be posted on Recovery.gov," DeSeve said. "Unlike the small number of reports reviewed by AP, these reports have been reviewed for weeks, errors have been spotted and corrected, and additional layers of review by state and local governments have further improved the data quality."

Regardless, Thursday's GDP numbers reflect a dramatic improvement for an American economy which teetered on the brink of a second Great Depression earlier this year. But with the highly anticipated White House jobs report due Friday, some like Paul Krugman will argue the Obama stimulus package was too small, while Republicans will doubtless claim it never should have been passed.