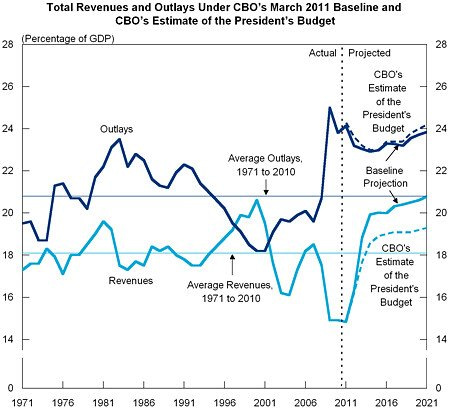 And now for today's quiz.
You are a member of Congress. The Congressional Budget Office (CBO) tells you that as a percentage of American gross domestic product, total taxes in the U.S. are at their lowest level since 1950. The nation is fighting two wars (and now, arguably a third), conflicts which were not only not paid for, but for the first time in modern American history, accompanied by tax reductions. You learn that the Bush tax cuts of 2001 and 2003 accounted for half the deficits during his tenure, and if made permanent, would produce more red ink over ten years than Iraq, Afghanistan, TARP and the stimulus combined. And the deficit for this year reached $1.5 trillion, in part because you just voted for a two-year, $800 billion tax cut compromise that includes another $140 billion windfall for the wealthy.
The question: Will you support any tax increases as part of a plan to help reduce future budget deficits and America's $14 trillion national debt?
If you're a leader of the Republican Party, the answer of course is no.
That's the word from The Hill, just the latest source to confirm that neither House Speaker John Boehner nor Senate Minority Leader Mitch McConnell will support new tax revenues as part of a deficit-cutting package:

Senate Republican Leader Mitch McConnell (R-Ky.) and House Speaker John Boehner (R-Ohio) have pledged to Americans for Tax Reform president Grover Norquist they will not support any deficit reduction package that increases taxes...
Michael Brumas, a spokesman for McConnell, declined to comment on the leader's private discussions on tax reform. He noted, however, that McConnell has said tax increases are not needed to reduce the deficit.
"I don't think we have a problem in this country because we tax too little. I think it's because we spend too much. And I think it's clear, given the election last November, we will not be raising taxes," McConnell said recently on MSNBC's "Morning Joe."
Michael Steel, a spokesman for Boehner, said: "Speaker Boehner has never voted for a tax increase, and that isn't going to change."

Maybe not, but it should.
At the end of the day, when it comes to cutting deficits and reducing the U.S. national debt, you simply can't there from here without raising taxes. When the effects of this recession (and perhaps, the 2012 presidential election) are over, that's precisely what we should do.

Recent history reminds us that it can be done. After all, the last time the top tax rate was 39.6% during the Clinton administration, the United States enjoyed rising incomes, 23 million jobs and budget surpluses. More important, the American tax burden hasn't been this low in generations. Thanks to the combination of the Bush Recession and the latest Obama tax cuts, the AP reported, "as a share of the nation's economy, Uncle Sam's take this year will be the lowest since 1950, when the Korean War was just getting under way." In January, the Congressional Budget Office (CBO) explained that "revenues would be just under 15 percent of GDP; levels that low have not been seen since 1950." That finding echoed an earlier analysis from the Bureau of Economic Analysis. Last April, the Center on Budget and Policy Priorities concluded, "Middle-income Americans are now paying federal taxes at or near historically low levels, according to the latest available data." As USA Today reported last May, the BEA data debunked yet another right-wing myth:

Federal, state and local taxes -- including income, property, sales and other taxes -- consumed 9.2% of all personal income in 2009, the lowest rate since 1950, the Bureau of Economic Analysis reports. That rate is far below the historic average of 12% for the last half-century. The overall tax burden hit bottom in December at 8.8% of income before rising slightly in the first three months of 2010.
"The idea that taxes are high right now is pretty much nuts," says Michael Ettlinger, head of economic policy at the liberal Center for American Progress.

The latest budget estimates from the Congressional Budget Office reflect that conclusion. The CBO forecast that President Obama's proposed FY 2012 budget would produce larger deficits ($2.3 trillion more) than the White House predicted because its assumptions about economic growth - and thus tax revenue - were too rosy. (As Jonathan Chait reminded us in The New Republic, we've had this argument before.) That's one reason why Ezra Klein of the Washington Post explained "How to Cut the Deficit by Doing Nothing," that is, by letting all of the Bush tax cuts expire as now scheduled at the end of 2012.
Republicans, of course, will never go for that. Last month, Senator Jim Demint (R-SC) and Rep. Mike Pence (R-IN) proposed making the budget-busting, Treasury draining Bush tax cuts permanent. What Demint and Pence call the "Tax Relief Certainty Act" is certain only to pile up trillions of new debt. And last week, Republican House Ways and Means Committee chairman Dave Camp (R-MI) called for capping both income and corporate taxes at 25%, another gilded class giveaway costing the government $2 trillion over ten years.
For their part, Democrats have tried to address both the mushrooming deficits and growing income inequality produced by President Bush's tax payday for the privileged. Just days after Vermont Senator Bernie Sanders proposed a 5.4% tax surcharge on Americans earning over $1,000,000 a year, Congresswoman Jan Schakowsky (D-IL) introduced the "Fairness in Taxation Act." Her plan, which would add an estimated $78 billion in annual tax revenue starting this year, would boost the current top 35% rate for millionaires and billionaires.
Ultimately, increasing tax revenue is just one part of getting the $14 trillion national debt under control. Since 2001, American defense spending in dollar terms has doubled; as percentage of GDP, it jumped from 3% to 5%. (It is worth noting that while George W. Bush was the first modern president to cut taxes during wartime, the final tab from Iraq and Afghanistan could reach $3 trillion.) And while Social Security is not a driver of deficits (and can be improved further by raising the income cap on payroll contributions to, say, $250,000), health care is. As Ezra Klein put it, "The problem is not MedicareandMedicaid. It's health care." And as Paul Krugman explained, the cure for that problem isn't without pain.
The real question in our little tax quiz today is not whether Americans will feel that pain, but whether it will be shared by all. For the like of Mitch McConnell, who is refusing to either raise taxes or increase the debt ceiling "unless President Barack Obama agrees to rein in Social Security, Medicare and Medicaid," the answer is no.