The British are Coming!

This week, American television screens will be overwhelmed by the news from London. Just not, it turns out, the story that really matters. Because while all eyes sadly remain fixed on the royal wedding, the British government announced that the "flat-lining" UK economy barely grew in first three months of 2011. Nevertheless, Republicans are cheering a new British invasion, hoping to bring to the U.S. the kind of draconian austerity measures now smothering the comatose UK economy.
After its half a point contraction in the fourth quarter of 2010, David Cameron's Tory government revealed the British economy expanded by only 0.5% from January through March. While the services sector enjoyed healthy growth, that optimism was tempered by a 3.5% drop in retail sales in March. And while the markets responded with relief that the Q1 GDP number wasn't worse, the Bank of England had forecast growth at 0.8%. As a result, an increase in interest rates designed to curb the UK's high inflation will now likely be delayed.
The GDP report is just the latest indication that the Conservatives' budgetary ax may be causing the British economic engine to stall. The headlines tell the tale. Earlier this month, the BBC reported "UK economy faces 'worrying' times." Meanwhile, the Guardian warned David Cameron's Tory government:

Some of the UK's most prominent business leaders, including individuals who gave their personal stamp of approval to the chancellor's aggressive spending cuts, have said they have growing concerns about the state of the economy, warning of weak growth and rising inflation ahead.

Three weeks ago, the OECD predicted continued sluggish growth for the UK, cutting back its forecasts for the quarter and the year:

In a survey of the G7 economies, the OECD estimated that UK gross domestic product would expand at an annualised rate of 1% in the second quarter.
This compared with an OECD forecast in November of 1.3%.
The OECD said the US economy was expected to expand by 3.4%, followed by France at 2.8% and Germany at 2.3%.

As the New York Times explained a fortnight back, policymakers on this side of the Atlantic will be looking for the lessons learned at 10 Downing Street:

In the United States, the debate over how to cut the long-term budget deficit is just getting under way.
But in Britain, one year into its own controversial austerity program to plug a gaping fiscal hole, the future is now. And for the moment, the early returns are less than promising.
Retail sales plunged 3.5 percent in March, the sharpest monthly downturn in Britain in 15 years. And a new report by the Center for Economic and Business Research, an independent research group based here, forecasts that real household income will fall by 2 percent this year. That would make Britain's income squeeze the worst for two consecutive years since the 1930s. 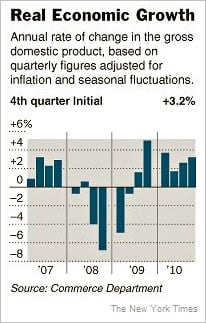 Undeterred, all but four House Republicans passed the Paul Ryan 2012 budget plan. 235 Republicans voted to slash $6 trillion in spending over the next decade, largely by gutting Medicaid and ending Medicare as we know it. (Still, Ryan's plan delivers $4 trillion in tax cuts, including $1 trillion in yet another windfall for the wealth, while still adding $6 trillion in debt over the next decade.) As the Washington Post's Ezra Klein explained, the Ryan plan still fails every GOP balanced budget amendment proposal and all Republican schemes to cap spending at 18% or 21% of American gross domestic product (GDP).
Former McCain economic adviser Mark Zandi, who credited the Obama stimulus and other recovery programs with preventing "Depression 2.0," quantified the pain the Republicans austerity plan would produce:

Not, that is, if Republicans have their way.
State and local governments have already shed over 400,000 jobs in the last two plus years. With state budget shortfalls estimated to top $100 billion for each of the next two years, analysts including Moody's Economics and the Center on Budget and Policy Priorities have forecast still more state and local job losses reaching between 400,000 and 900,000. (It's no wonder Ezra Klein of the Washington Post deemed cutbacks at the state level the "anti-stimulus.") But any hope of help from the federal government is a political impossibility.
Republicans are promising to make things much, much worse. Despite his party having voted seven times to increase the debt ceiling under President George W. Bush, Senate Minority Leader Mitch McConnell is threatening to block action on the $14.3 trillion debt ceiling unless Democrats put a balanced budget amendment to the Constitution and steep cuts to Social Security, Medicare and Medicaid on the table. House Budget Committee chairman Paul Ryan's 2012 budget proposal provides them, with a $1 trillion slashed from a Medicaid and $3 trillion from Medicare. (While the former is converted into a block grant program for the states, Medicare is ended altogether, replaced with a voucher system which inevitably ration health care for future senior citizens.) More cynical still, virtually of all Ryan's proposed $4.3 trillion in spending cuts (almost three quarters of which is drained from programs for the poor and elderly) goes to paying for yet another tax cut windfall for the wealthy.
To be sure, the economic pictures in the UK and the U.S. are far from identical. While the depth of the recession was worse here, as a percentage of GDP London has much higher taxes, spending and debt. (As the CBO noted, for the federal government in 2011 "revenues would be just under 15 percent of GDP; levels that low have not been seen since 1950.") Compared to the relatively paltry $39 billion in spending cuts secured by this week's budget agreement in Washington, Prime Minister David Cameron's austerity budget announced in October seeks to close the budget gap within five years by slashing spending, raising taxes and sacking 490,000 government workers. Left unmentioned by American conservatives is the fact that the British plan counts on value-added and income tax increases - including a top rate of 50% for the wealthiest in the UK - to reduce its national debt.
While the jury is still out on the Cameron plan, the likely verdict is becoming clearer. Richard Portes, an economist at the London Business School, lamented earlier this month:

"My view is that we are in serious danger of a double-dip recession. This is going to be a cautionary tale."

So how's that theory looking? Not good. The British economy, which seemed to be recovering earlier in 2010, turned down again in the fourth quarter. Yes, weather was a factor, and, no, you shouldn't read too much into one quarter's numbers. But there's certainly no sign of the surging private-sector confidence that was supposed to offset the direct effects of eliminating half-a-million government jobs. And, as a result, there's no comfort in the British experience for Republican claims that the United States needs spending cuts in the face of mass unemployment.

Just days after the anniversary of the battles of Lexington and Concord (the ones in Massachusetts and not, as Michele Bachmann would claim, in New Hampshire), the warning to Americans is the same.
The British are coming!