The Economist Pounds Romney on the Economy

In the next several days, The Economist newsmagazine will make its 2012 presidential endorsement. Despite its mantra on free trade and free markets, in the past that icon of international business and politics has endorsed both Democrats (Bill Clinton in 1992, John Kerry in 2004) and Republicans (Ronald Reagan in 1980, Bob Dole in 1996 and George W. Bush in 2000). But while there is no guarantee the publication will repeat its 2008 support of Barack Obama, an endorsement of Mitt Romney would come as a something as a surprise. After all, from taxes and the auto bailout to the U.S. economic recovery and so much else, The Economist has been pulverizing Romney's policies and talking points for months. 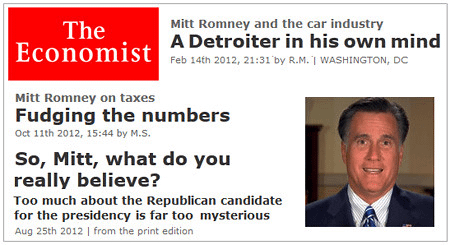 Two weeks ago, The Economist surveyed several hundred academic and business economists as to which White House hopeful would be a better steward of the economy. The results were clear, especially among the professional economists of the National Bureau of Economic Research:

Our main finding should hearten Mr Obama. By a large margin they rate his overall economic plan more highly than Mr Romney's, credit him with a better grasp of economics, and think him more likely to appoint a good economic team.

That outcome shouldn't have as a surprise to the editors. Like the Republican leaders who called President Obama's rescue of the U.S. auto industry "the road to socialism" and "the leading edge of the Obama administration's war on capitalism," The Economist opposed the bailout that ultimately saved over a million American jobs. But in April 2010, the magazine acknowledged its error, proclaiming, "An apology is due to Barack Obama: his takeover of GM could have gone horribly wrong, but it has not." And when candidate Romney earlier this year penned an op-ed echoing his jaw-dropping boast that "I'll take a lot of credit" for the salvation of Chrysler and GM, The Economist was having none of it from the author of "Let Detroit Go Bankrupt":

Free-marketeers that we are, The Economist agreed with Mr Romney at the time. But we later apologised for that position. "Had the government not stepped in, GM might have restructured under normal bankruptcy procedures, without putting public money at risk", we said. But "given the panic that gripped private purse-strings...it is more likely that GM would have been liquidated, sending a cascade of destruction through the supply chain on which its rivals, too, depended." Even Ford, which avoided bankruptcy, feared the industry would collapse if GM went down. At the time that seemed like a real possibility. The credit markets were bone-dry, making the privately financed bankruptcy that Mr Romney favoured improbable. He conveniently ignores this bit of history in claiming to have been right all along.

It's wonder why by August The Economist ("So Mitt, What Do You Really Believe?") concluded:

All politicians flip-flop from time to time; but Mr Romney could win an Olympic medal in it...Competence is worthless without direction and, frankly, character.

And to be sure, The Economist saw more than a character flaw in Romney's shamelessly dishonest tax plan. In "Fudging the Numbers," the venerable paper blasted Mitt's mendacious claim that "The president's charge of a $5 trillion tax cut is obviously inaccurate and wrong because what he says is, all right, let's look at all the rates you're lowering, and then he ignores the fact that I also say we're also going to limit deductions and credits and exemptions." The Economist didn't just confirm Obama's presentation of the inescapable math produced by nonpartisan analysts like the Tax Policy Center, but delivered a scathing assessment of Romney's disingenuousness:

You see what he just did there, right? If the United States were a publicly-traded company and Mitt Romney were its CEO, and if that interview had been a conference call with analysts, shares in USA Inc would have dropped 5% in the subsequent minute...His response is an acknowledgment that he can't make his numbers add up, so he's hiding behind a smokescreen of feigned incomprehension. The deduction caps can't make up for the tax cuts he's proposing. Either some of those cuts won't happen, or the deficit will go up.

When The Economist isn't destroying Mitt Romney's transparently cynical policies, it's debunking his myths posing as talking points.
Starting with his formal announcement in June 2011, Governor Romney has spent much of the campaign claiming President Obama "made the economy worse." That lie hasn't merely been repeatedly exposed by the nonpartisan Congressional Budget Office and the overwhelming consensus of economists (including John McCain's top 2008 adviser Mark Zandi), all of whom testified the success of the 2009 stimulus program. Last year, The Economist reminded everyone that the U.S. economy bequeathed by George W. Bush to Barack Obama was literally on the brink of collapse:

Output in the third and fourth quarters fell by 3.7% and 8.9%, respectively, not at 0.5% and 3.8% as believed at the time. Employment was also falling much faster than estimated. Some 820,000 jobs were lost in January, rather than the 598,000 then reported. In the three months prior to the passage of stimulus, the economy cut loose 2.2m workers, not 1.8m. In January, total employment was already 1m workers below the level shown in the official data.

That's just one of the reasons why Mitt Romney has taken to regurgitating a new sound bite. The Obama economic rebound, Romney and his surrogates insist, has been "slower than the usual recovery." This scam doesn't merely ignore the GOP's obstruction of the American Jobs Act and the first recession-time contraction of the public sector in 40 years, but historical research completely debunking the claim. Reviewing the work of Carmen Reinhart and Kenneth Rogoff, The Economist concluded there was nothing "usual" about this recession and the recovery from it:

Unsurprisingly, economists sympathetic to Mitt Romney, Mr Obama's Republican challenger, have produced studies claiming that the slow recovery is not due to the legacy of the financial crisis but rather the incumbent's allegedly growth-stifling policies. Fortunately, Ms Reinhart and Mr Rogoff have published a new paper (no link, sorry) that clarifies the issues from an apolitical perspective. Their central finding is that their critics have misinterpreted the data.

"Financial crises" like the one the United States just endured, The Economist concluded, "are very bad for growth over long periods."
Perhaps surprisingly, The Economist even acknowledged that the private equity industry Mitt Romney helped pioneer is hardly an unmitigated blessing for society. "Private-equity firms may make the economy work better," the editors explained in January, "but their bosses get too much cash." It's not just that rates of return for investors are dropping, either:

Critics are on stronger ground when they complain that private-equity firms burdened companies with debt, took the cash out as dividends and sometimes drove them to the wall. Bankruptcy was not the intention nor, in the great majority of cases, was it the outcome. But as the price of debt fell, that pattern became increasingly common. From 2004 to 2011 private-equity firms piled more debt onto their companies so they could take out $188 billion in dividends to pay themselves. The deals got bigger and bigger. The largest ever, in 2007, was the $44 billion purchase of TXU, an electricity company. The market worries the company will go under.
But though the private-equity people may have walked off with the loot, America's tax code was partly to blame, because it encourages this behaviour. The tax deductibility of interest payments on debt gives private-equity executives an incentive to pile extra debt onto the companies they buy, thereby risking the health of these firms for the sake of a tax benefit and the prospect of higher returns.
There is another way in which the tax code is responsible for allowing private-equity types to walk off with vast bounties. Their profits, called "carried interest", are taxed as capital gains, which incur a lower rate than income does. People who work in the business maintain that carried interest is investment income, but most of the capital at risk is that of investors, not their own.

"Carried interest is really a bonus and should be taxed like one," The Economist wrote, adding "Politicians in America and Britain, who have been debating this loophole since 2007, should close it."
As for Mitt Romney's door to the White House, let's hope that American voters and the editors of The Economist will close that, too.