The Final Fury of John McCain 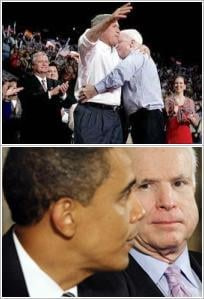 Over the last several weeks, John McCain's rapid descent into furious incoherence has spawned a cottage industry of McCainologists. But his open scorn and seething rage over Don't Ask, Don't Tell, the DREAM Act, the START Treaty and even aid to 9/11 responders is hardly McCain's first performance of King Lear. But after his humiliation by George W. Bush in 2000, McCain swallowed his pride and his principles in pursuit of his own presidential ambitions. Those hopes now dashed by Barack Obama, John McCain is left with nothing but his own pettiness and frustration.
McCain's past hatred for George W. Bush is the stuff of legend. As Time reported in March 2000, McCain showed a visceral disgust towards Bush and his scorched earth campaign:

But many close McCain advisers think the personal rift between the two men is too wide to bridge, at least in the near term. After all, the last time Bush tried to smooth things over-at a South Carolina debate in early February-the result was less than promising. During a commercial break, Bush grasped McCain's hands and made a sugary plea for less acrimony in their campaign. When McCain pointed out that Bush's allies were savaging him in direct-mail and phone campaigns, Bush played the innocent. "Don't give me that shit," McCain growled, pulling away. "And take your hands off me."

John McCain could certainly be forgiven for his anger, given the painful memories of character assassination, smears and lies the Bush camp dished out during the 2000 campaign. After McCain's upset win in the New Hampshire primary, Bush operatives during the critical South Carolina contest phoned voters with push polls implying McCain was anti-Catholic, his wife Cindy a drug addict, and that he had fathered an illegitimate black child with a prostitute. (In reality, the McCains had adopted a baby from an orphanage in Bangladesh.) McCain even received an early version of the Swift Boat treatment, with allegations that his Vietnam War captivity in Hanoi left him mentally unstable. All of these slurs came as candidate Bush chastised McCain that he couldn't "take the high horse and then claim the low road." It's no wonder he angrily rejected Bush's feigned attempt in 2000 to bury the hatchet.
But by 2004, John McCain was looking towards his next White House run - and life after Bush. McCain's presidential ambitions let him forgive sins past in order to rebuild relations with Bush and the Republican establishment. McCain's long road back began during election 2004. McCain not only stumped for George W. Bush, but joined the chorus of the Swift Boat hacks by stating that "what John Kerry did after the war is very legitimate political discussion." (Only the previous month, McCain himself called the attacks on Kerry "dishonest and dishonorable.") Bush press secretary Dana Perino was exaggerating only slightly when she claimed today that "in 2000 and 2004, Senator McCain went on to work his tail off to help this president."
But John McCain didn't merely make a deal with the devil; he adopted his platform as well. With the approach of the 2008 Republican primaries, McCain reversed course on the Bush tax cuts about which he had once protested:

"I cannot in good conscience support a tax cut in which so many of the benefits go to the most fortunate among us at the expense of middle-class Americans who need tax relief."

By the summer of 2008, John McCain's conversion from self-proclaimed Maverick to Bush automaton was complete:

Desperate to win over the party's hard right base heading into Iowa and New Hampshire, McCain adopted virtually the entire Bush agenda while reversing his past criticism of the religious right. Identifying himself in one primary night speech after another as a "foot soldier" in the Reagan revolution, McCain touted his conservative credentials that featured a Senate voting record CQ gave 90% score for party unity, one aligned with President Bush 100% of the time in 2008 and 95% in the previous year.

But in 2008, John McCain still had a political future. Now, after his drubbing by President Obama, he has nothing but his own resentment.
Joe Klein captured McCain's Lear-like descent in madness, lamenting:

I used to know a different John McCain, the guy who proposed comprehensive immigration reform with Ted Kennedy, the guy--a conservative, to be sure, but an honorable one--who refused to indulge in the hateful strictures of his party's extremists. His public fall has been spectacular, a consequence of politics--he "needed" to be reelected--and personal pique. He's a bitter man now, who can barely tolerate the fact that he lost to Barack Obama. But he lost for an obvious reason: his campaign proved him to be puerile and feckless, a politician who panicked when the heat was on during the financial collapse, a trigger-happy gambler who chose an incompetent for his vice president. He has made quite a show ever since of demonstrating his petulance and lack of grace.

As it turns out, McCain himself offered a hint of disdain for the supposed upstart Senator from Illinois. In a February 2006 letter to Obama about lobbying reform, McCain seethed:

I would like to apologize to you for assuming that your private assurances to me regarding your desire to cooperate in our efforts to negotiate bipartisan lobbying reform legislation were sincere. When you approached me and insisted that despite your leadership's preference to use the issue to gain a political advantage in the 2006 elections, you were personally committed to achieving a result that would reflect credit on the entire Senate and offer the country a better example of political leadership, I concluded your professed concern for the institution and the public interest was genuine and admirable. Thank you for disabusing me of such notions with your letter to me dated February 2, 2006, which explained your decision to withdraw from our bipartisan discussions. I'm embarrassed to admit that after all these years in politics I failed to interpret your previous assurances as typical rhetorical gloss routinely used in politics to make self-interested partisan posturing appear more noble. Again, sorry for the confusion, but please be assured I won't make the same mistake again...
As I noted, I initially believed you shared that goal. But I understand how important the opportunity to lead your party's effort to exploit this issue must seem to a freshman Senator, and I hold no hard feelings over your earlier disingenuousness. Again, I have been around long enough to appreciate that in politics the public interest isn't always a priority for every one of us. Good luck to you, Senator.

Of course, Barack Obama didn't need either luck or a lecture from John McCain. After McCain's first King Lear act 10 years ago, it was George W. Bush who explained why:

"There's a reason all those colleagues of his in the Senate support me and not him. They think he's sanctimonious, and they're right."

Now, all McCain has left is his sanctimony.