The Politics of Life and Death in West Virginia

In the wake of the Massey Energy tragedy that killed 29 coal miners in West Virginia, there appear to be two steps that could improve worker safety there. First, as the mine accident record of the last decade suggests, join a union. Second, put Democrats in the White House to reverse the GOP's nationwide gutting of federal regulation and oversight. Sadly, both trends in West Virginia have been moving the opposite direction. 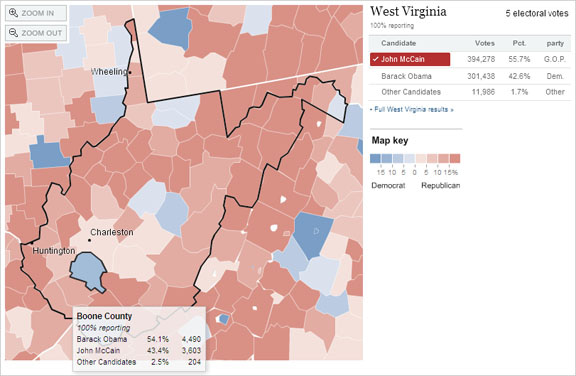 On Tuesday, United Steelworkers President Leo Gerard assured MSNBC's Ed Schultz, "I can absolutely say that if these miners were members of a union, they would have been able to refuse unsafe work... and would not have been subjected to that kind of atrocious conditions." Jeff Biggers, author of Reckoning at Eagle Creek: The Secret Legacy of Coal in the Heartland, echoed that conclusion, telling Rachel Maddow:

"Virtually, all the major accidents and disasters have taken place in non-union mines. And really, Massey Energy is infamous not only for their state of violations both with underground and but also surface mining, but the fact that they really were part and parcel of being aggressive about breaking up the unions in the 1980s and the 1990s."

While history of safety violations at the Montcoal facility and other of Massey CEO Don Blankenship's non-union locations is particularly egregious, the national picture is similarly dismal. As David Moberg documented, "fatalies [are] higher at non-union mines - like Massey's Upper Big Branch":

An examination of the incidence of coal mine fatalities since 1995 shows that in every year but one fatal accidents occurred in non-union mines at a rate disproportionate-usually much more disproportionate-to the non-union share of the workforce. In other words, unionized mines were much safer...
In 2006 through 2009 union mines accounted for 10, 6, 10 and 5 percent, respectively, of all coal mine deaths, but over that period unions represented 15 to 22 percent of coal miners. For those years unionized miners appear to have been one-fourth to one-half as likely to be killed in mine incidents as their non-union peers.

But across the United States, union membership in the coal mining industry has plummeted. According to the UnionStats database, 62% of the nation's 174,880 coal miners were union member in 1983. By 2009, that ration dropped to 20% in an industry that had contracted to 96,881 workers.
And among West Virginians who vote, the decline in union power at the ballot box has been dramatic. While Bill Clinton easily carried the state in 1992 and 1996, in 2000 George W. Bush beat Al Gore by 52% to 46%. In 2004, when 17% of voters were union members and a third had a union member in their household, Bush expanded his margin to 56% to 43%. Despite the national Bush backlash in 2008, John McCain easily beat Barack Obama by the same 56% to 43% tally. But by then, only 13% of West Virginia voters were still union members, while union families dropped to only a quarter of households.
But in the sea of red counties in West Virginia's 2008 presidential electoral map (see above), there are isolated pockets of blue. Among them is Boone County. (Raleigh County, home to Massey Energy's Upper Big Branch mine, gave John McCain 62% of its vote.) Carried by John Kerry in 2004, Boone still went for Obama over McCain by 54% to 43% even as the southwest part of the state moved even further right. (To see the 2008 county-by-county totals and shifts from 2004, see this interactive New York Times map.)
As the Charleston Gazette reported after the election, Obama owed his strength there to union support:

As one West Virginia Blue reader put it:

"Cecil Roberts and the UMWA really did a hell of a job for Obama. It's really sad that their strength isn't what it used to be. In Boone County, there are still several union mines and a good number of union miners and retirees. Sadly, that's not the case in most of southern WV where Massey and Friends of Coal rule."

And when Massey gets its man in the White House, coal miners are sure to suffer.
After the Sago disaster in 2006, President Bush used a recess appointment to elevate Richard Stickler to the post of Mine Safety Czar. During the 1980's and 1990's, three workers were killed at BethEnergy mines managed by Stickler. He also worked briefly for Massey Energy subsidiary Performance Coal in 1996 and 1997.
The contrast with Obama's pick could not be more stark. As Huffington Post reported, Joe Main, a former United Mine Worker of America official, took over the Mine Safety and Health Administration in October.
And yet, as ABC News reported, the current regulatory regime allows operators like Don Blankenship to game the system. Huffington Post explained the dynamic:

It turns out that, according to current rules, contested violations can't be taken into consideration when assessing whether a pattern of violations exists.
Contesting those violations also allowed Massey and other companies to delay paying the fines levied against them -- thwarting a key enforcement mechanism.

Clearly, the safety of America's mine workers will require much greater regulation and oversight of their industry. For coal miners in West Virginia and around the nation, supporting unions and Democrats could be the difference between life and death.
UPDATE: The New York Times details the toothless regulatory beast that is the 35 year old Mine Safety and Health Administration. As the Times concluded, MSHA remains "remains fundamentally weak in several areas, and it does not always use the powers it has," such as:

The agency can seek to close mines that it deems unsafe and to close repeat offenders, but it rarely does so.
The fines it levies are relatively small, and many go uncollected for years. It lacks subpoena power, a basic investigatory tool. Its investigators are not technically law enforcement officers, like those at other agencies, including the Food and Drug Administration and the Environmental Protection Agency.