Economics, the textbooks say, is the study of the allocation of scarce resources. The economics of health care is certainly no exception. Given the competing and often contradictory demands across its ecosystem of patients, employers, physicians, drug stores, pharmaceutical firms, device manufacturers, clinics, hospitals, insurers, and government, the economics of health care might more accurately be described as the allocation of pain. In the face of the infinite "wants" for healthy citizens, financially secure families, well-compensated practitioners, and strong profits for private companies of all stripes, societies must choose how and why to distribute discomfort and dissatisfaction to some or all of the constituents.
But that "why" isn't so much a question of the "dismal science" as one of national values. And in the United States, virtually alone among major modern economies since World War II, the paramount, if often unstated, value has been an especially narrow notion of "freedom." Freedom, that is, to choose which if any insurance to offer or purchase. Freedom to charge whatever prices the "market"--and insurers--will bear for doctors' visits, tests, procedures, surgeries, prescription drugs, hospital stays, and even insurance itself. But by 2010--with 50 million uninsured, 25 million underinsured, 60 percent of bankruptcies due to medical costs, one in five people deferring needed care, and thousands without coverage needlessly dying every year--Americans had learned that freedom of choice often only meant the freedom to go without. To put it another way, the U.S. health care system had long allocated most of the pain to its consumers. 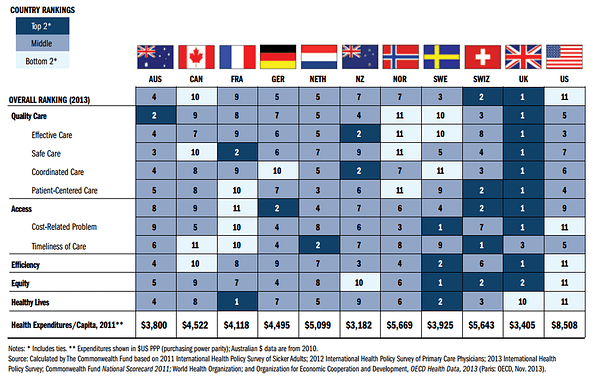 With President Obama's signature on the Patient Protection and Affordable Care Act on March 23, 2010, the United States began to elevate another objective for its health care system: Near-universal coverage. And by and large, the ACA has worked as designed, enabling as many people as possible to obtain health care at a "reasonable" cost to themselves and the government. (Some 12.7 million taxpayers were exempted from Obamacare's individual mandate in 2016, while another 6.5 million paid $3 billion in penalties for not obtaining insurance coverage.) With 25 million newly covered, America's uninsured rate has dropped to a historic low as family finances and income inequality have improved.
Nevertheless, Republicans, who have never accepted universal coverage as the objective for American health care reform, are continuing in their perpetual quest to "repeal and replace" Obamacare. Democrats, concerned about rising premiums, high deductibles, and limited choice of insurers in some regions are offering proposals to "improve and extend" the ACA. But if the "why" of reform is to ensure health care for every citizen and legal resident of the United States, there's no great mystery as to how to achieve it. Decades of global experience and recent American history provide three inescapable lessons to show the way.
Continue reading at Daily Kos.