As the New Year begins, imagine that this is how your 2018 ended: You work at a company where the CEO and the management team are notoriously corrupt. They began the year by taking on $150 million in new debt for the purpose of rewarding themselves and their shareholders with a massive stock buyback. But as the holidays approached, the big boss declares about one-third of all the workers will be furloughed or required to work without pay. Then--just in time for Christmas--the CEO announces the 2 percent raise planned for 2019 will be cancelled. The company, he complains, can't afford the $25 million-dollar cost.
As it turns out, that hypothetical is actually real. Just multiply the dollar figures by 1,000 and replace "CEO" with "President Donald Trump." The result is the "happy holidays" experienced by the 2.2 million employees of the federal government.
Of course, this was no surprise attack on the Americans who do the work of the people's government. The Republican war on the 22.3 million public sector employees of federal, state, and local governments has been underway for years. And the twin goals of that GOP assault--to demonize government itself while fatally wounding the last bastion of American union power--have never changed. 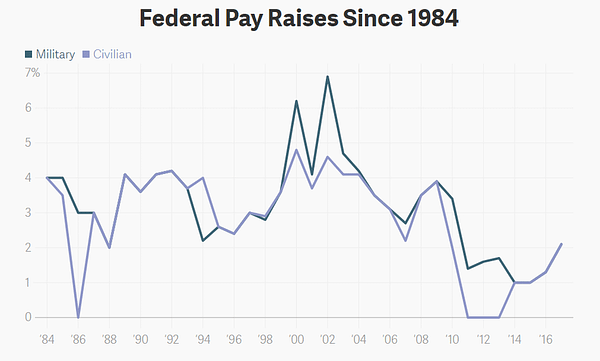 The context for the current GOP punishment of public sector workers is Trump's unnecessary government shutdown. (Unnecessary, that is, because the Senate passed a bill featuring $1.3 billion in border security funding with Trump's blessing on the Wednesday before Christmas, only to have Trump change his mind within 24 hours. And a year ago, Trump and Democratic Minority Leader Chuck Schumer agreed to a deal funding the president's border wall in exchange for a resolution of the fate of the 800,000 "Dreamers." Trump's then-chief of staff John Kelly then blew up the deal.) Of the nation's 2.2 million civilian workers (excluding 600,000 in the postal service), some 340,000 federal employees have now been furloughed, while an additional 500,000 are now working without pay.
The GOP's best and brightest greeted those numbers by essentially telling America's public servants to drop dead.
Continue reading at Daily Kos.