Trump Had Evangelicals at "Hello"

As Donald Trump began steamrolling his Republican competition earlier this year, some evangelical leaders grew concerned. And why not? The formerly pro-choice real estate developer and casino mogul turned GOP frontrunner who once boasted of his dating conquests and personal Vietnam war against sexually transmitted diseases had become a poster child for the notion that marriage is an institution between one man and three women in rapid succession. Articles with titles like "10 reasons you can't be a Christian and vote for Donald Trump" and "Donald Trump is not the moral leader we need" started to appear. On the eve of the Iowa caucus, the National Review fretted about The Donald's steadfastness on abortion, same-sex marriage, poverty, and supposed religious liberty, warning:

[C]onservative Christians who seek to elevate someone who shares their principles and commitments should carefully consider Trump's biography before making their decision.

But if these evangelicals worried that their co-religionists were going to be left behind by Donald Trump, they needn't have. As a new Pew Research Center survey this week revealed, Trump is already outperforming Mitt Romney, John McCain and George W. Bush among white evangelical voters. His jaw-dropping 61-point margin over Democrat Hillary Clinton shows his success at speaking to their fears, if not their hopes. As it turns out, the born-again embrace of Trump's brand of nostalgic 1950's nationalism began when he first considered running for the White House five years ago. 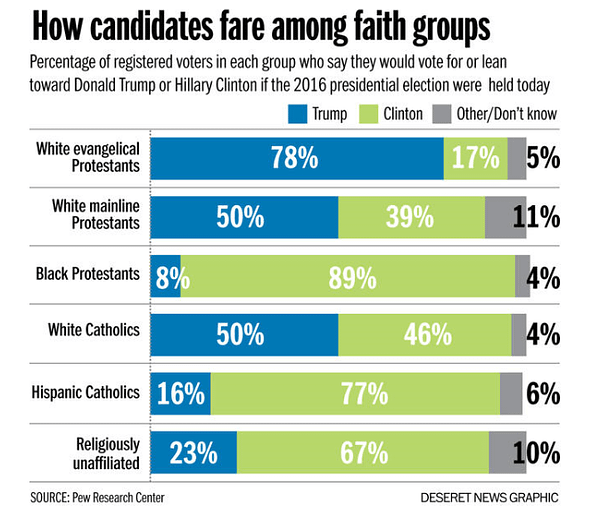 He may be a Presbyterian who thinks Two Corinthians walked into a bar, but Donald Trump clearly commands the backing of white, born-again voters. As CNN reported, their support is motivated less by their love of God than their hatred of Hillary:

Those numbers represent a major--and rapid--improvement from earlier this year. In January, a previous Pew poll "found nearly three-in-10 white evangelicals resistant to the idea of his candidacy, saying he would make a 'poor' or 'terrible' president." With Trump performing surprisingly well among evangelicals in the early primaries compared to Ted Cruz (R-TX) and Dr. Ben Carson, Geoffrey Layman examined the 2016 American National Election Studies (ANES) Pilot Study and found that:

But it was already becoming clear five years ago that Trump's checkered past wouldn't be a barrier to evangelicals checking the box next to his name. In early 2011, just two years after switching to the Republican Party, the Donald began testing the waters for a 2012 run for the GOP nomination. By that March, the new face of the Birther movement was rewarded with a weekly Fox News segment called "Monday Mornings with Trump." Despite Trump's admission that he's "not a really good husband," David Brody of the Christian Broadcasting Network (CBN) suggested he could nevertheless be a great choice for President:

Before you watch the Donald Trump's interview with Bill O'Reilly last night let me sum up the main points that Evangelicals might be interested in:

As it turns out, Brody was not alone. As he breathlessly reported at the time, Donald Trump was getting some serious attention from some of the biggest names in evangelical politics:

Ralph Reed, one of the top GOP strategists in the country and Chairman of the Faith and Freedom Coalition tells The Brody File, "There is a nascent and growing curiosity in the faith community about Trump. Evangelicals will like his pro-life and pro-marriage stances, combined with his business record and high-wattage celebrity all but guarantee he will get a close look from social conservatives as well as other Republican primary voters." Tony Perkins, President of the Family Research Council is curious to hear more as well. "Given Donald Trump's background in the gambling industry and his flamboyancy one would not think he would be a fit with Evangelical voters. However, given the wide open field of candidates, strong statements that Trump has recently made on core social issues combined with an overarching desire to see a new occupant in the White House, he may find support among social conservatives."

(Then as now, Ralph Reed was the perfect partner to proselytize for Trump. Like The Donald, the Christian Coalition's dirty trickster takes no prisoners, boasting in 1991:

"I want to be invisible. I do guerrilla warfare. I paint my face and travel at night. You don't know it's over until you're in a body bag. You don't know until election night."

Along with his business buddy Jack Abramoff, Reed also enjoyed golf outings in Scotland. And like Trump, Reed made millions in the casino racket, playing one Native American tribe against the other. And while Donald Trump famously mocked Natives Americans during Congressional testimony, Abramoff and Reed exchanged emails branding their own clients "troglodytes" and "monkeys.")
As we fast forward to 2016, the GOP's presumptive presidential nominee has Perkins, Reed and many more evangelicals in his corner. As Reed told Trump at the Faith and Freedom Coalition's Road to Majority Conference in June, "You don't need to quote scripture, just come and be yourself." As it turns out, The Art of the Deal author struck a mutually beneficial deal to make it possible. The policy agnostic Trump will do the evangelicals' bidding in exchange for their help in making his path to power possible. As white Christian America continues its demographic decline from 54 percent of the population in 2008 to just 45 percent now, the GOP's born-again brain trust is desperate for what The Donald has to offer.
Robert P. Jones, author of the new book, The End of White Christian America, explained the bargain. As Joan Walsh summed it up in The Nation:

[S]hockingly to many, white evangelicals gave a majority of their votes to a thrice-married libertine with little history of religious piety, Donald Trump. The answer, Jones told me in an interview, lies with one of PRRI's key research findings: Seventy-two percent of white evangelicals say the country has gotten worse since the 1950s. In a February piece in The Atlantic, Jones explained how the "Values Voters" of the last few decades have become "Nostalgia Voters" in the age of Obama, and Trump is the man they trust to restore the country's golden age. More than six in 10 white evangelicals believe discrimination against white people has become as big a problem as discrimination against black people, PRRI has found; two-thirds think immigrants take jobs and drain tax dollars.
"They saw Cruz as fighting old-school culture wars, and they trust Trump to turn back the whole tide," Jones told me. Trump deftly combined three overlapping but separate GOP constituencies: the adherents to the old Southern strategy (with its Northern admirers), the Christian right, and the Tea Party. As the campaign began last year, many observers, including myself, thought those groups might fight among themselves; Trump found a way to unite them--around nostalgia for a better day, as well as around race.

In countless collisions of color and creed, Donald J. Trump's name evokes an easily understood message of racial hostility. Defying modern conventions of political civility and language, Mr. Trump has breached the boundaries that have long constrained Americans' public discussion of race.
Mr. Trump has attacked Mexicans as criminals. He has called for a ban on Muslim immigrants. He has wondered aloud why the United States is not "letting people in from Europe." 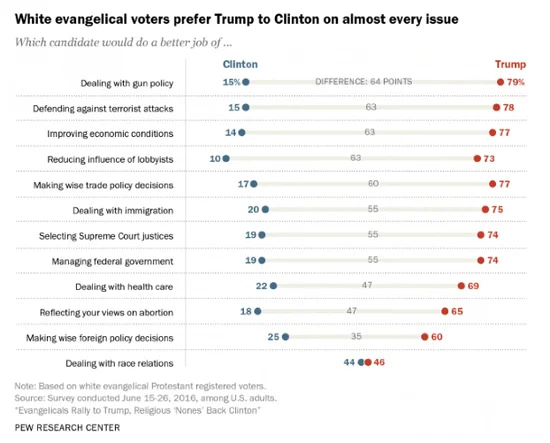 Most evangelical leaders seem to have no issue with that. James Dobson, perhaps previously best known for his crusade against SpongeBob Squarepants, claimed that Trump had been born-again. "If anything, this man is a baby Christian who doesn't have a clue about how believers think, talk and act." Dobson said, "All I can tell you is that we have only two choices, Hillary or Donald. Hillary scares me to death." As for Reed, he insists that all Trump needs to do is "emphasize the fact that he shares their views on certain core social, cultural and moral issues, life, marriage, support for the state of Israel, opposition to the Iran nuclear deal and support for religious liberty. He is good on every one of those."
And as their de facto agreement calls for, evangelicals are getting almost everything they want in the 2016 Republican platform. Tony Perkins is certainly pleased with the hardline abortion plank, as well as support for so-called "gay conversion therapy." Opposition to a two-state solution and an undivided Jerusalem, the position of white evangelical if not Jewish Americans, is central to the platform's plank of Israel. Liberty University President, the Reverend Jerry Falwell Jr., gushed over one of the platform's greatest gifts of all: Donald Trump's promise to repeal the "Johnson Amendment," which "changed the U.S. tax code to bar tax-exempt organizations such as churches and nonprofits from backing or opposing political candidates."

"This is going to create a revolution among Christian leaders, nonprofit universities, and nonprofits in general," Falwell, who endorsed Trump in January, said in an interview with the Richmond Times-Dispatch.
The influential evangelical leader -- who took over Liberty following the 2007 death of his father, university founder Jerry Falwell Sr. -- said repeal of the law, which would require congressional action, would be "the biggest thing for evangelical Christians to come along in decades," asserting they have been "silenced by arcane rules" from exercising "political free speech."

For his part, Trump told evangelical leaders in June, "I think maybe that will be my greatest contribution to Christianity."
It is true, some big names, like Russell Moore of the Southern Baptist Convention and homeschooling pioneer Michael Farris, aren't happy that their fellow evangelicals sold their souls to the devil. But as the polling numbers show, their white followers have fallen in line, if not in love, with Donald Trump. And that, as the Associated Press recounted, is just their part of what is just another deal for The Donald:

"Almost every deal I have ever done has been at least partly for my ego," the billionaire declared in a 1995 New York Times opinion piece titled, "What My Ego Wants, My Ego Gets."

That's not all he said. "People need ego; whole nations need ego." And for Trump's ego, "the important thing is the getting, not the having." America's white evangelicals may be rapturous at the prospect of Donald Trump getting and having the White House. For most of the rest of us, that would be hell on earth.