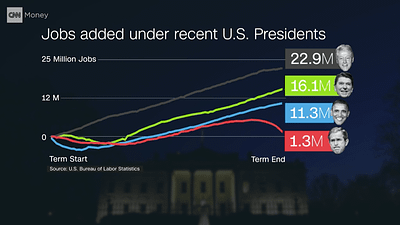 If nothing else, during their eight years in the White House George W. Bush and company became experts at deflecting blame. After all, the likes of Dick Cheney, Condoleezza Rice, and Bush himself all chanted that "nobody could have predicted" the Sept. 11 attacks, the devastation of Hurricane Katrina, and so many other disasters that occurred on his watch. But it was in explaining away his dismal stewardship of the American economy where Team Bush continued to deploy the same talking point even long after Dubya departed the scene: it was all Bill Clinton's fault.
Even before Bush took the oath of office, Cheney, Newt Gingrich, Dick Armey, and Sean Hannity all falsely declared that his administration "inherited a recession." Even after Barack Obama was sworn in on Jan. 20, 2009, Bush's first press secretary Ari Fleischer and former Cheney aide Mary Matalin continued to parrot lines like "I was there, we inherited a recession from President Clinton." In his final press conference, President Bush reduced the worst financial crisis since the Great Depression to a rhetorical book-end:

"In terms of the economy, look, I inherited a recession, I am ending on a recession. In the meantime there were 52 months of uninterrupted job growth."

Eight years later, Donald Trump is trying to reverse Bush's formula by claiming credit where he deserves none. Even before his inauguration last week, President-elect Trump was touting rising consumer confidence, jobs "saved" at Carrier Air Conditioning and Ford, as well as jobs created at GM. This week, he took to Twitter to cheer the Dow Jones breaking through the 20,000 barrier. Unsurprisingly, his water carriers in the media, many of them the same people who proclaimed the "Obama Bear Market" as far back as the summer of 2008, quickly announced the arrival of the "Trump Rally."
Now, it's no shock that a politician would try to appropriate someone else's applause--especially a huckster like Trump who after the 2012 presidential election warned America faced "financial ruin" and who spent much of the 2016 campaign decrying "the total failures of the Obama-Clinton economy." But on Jan. 20, President Trump didn't just portray the U.S. economy as a blighted hellscape he deemed "American carnage." Trump also promised 25 million new jobs and 4 percent economic growth, an average no President has hit since LBJ.*
Luckily for him, Donald Trump didn't inherit a recession, but instead the Obama boom. By almost every indicator from job creation, GDP growth, income, and the unemployment rate to stock market performance, consumer confidence, health insurance coverage, and so much more, President Barack Obama handed off a far stronger economy than George W. Bush bequeathed to him eight years ago. And Obama produced this record not thanks to cooperation from Republicans in Congress, but despite unprecedented GOP obstruction that stretched across his two terms in the White House. Nevertheless, even in the face of that sabotage Barack Obama became just the latest occupant of the Oval Office to show that the U.S. economy almost always does better under Democratic presidents.
Continue reading at Daily Kos.