Trump Boasts He Can Deliver 6 Percent Economic Growth. Sadly, No.

Speaking a shale industry conference in Pittsburgh last week, Republican presidential nominee Donald Trump made a bold promise. "My entire economic plan," Trump boasted, "will create 25 million new jobs over the next 10 years, assuming an average growth rate of 3.5 percent, and I believe we can reach beyond actually 4 percent growth."
Leaving aside the jobs number for a moment, there are a few problems with Trump's GDP pledge. For starters, less than a year ago the reality TV star was promising to deliver not four, but six percent economic growth. Making matters worse, no President since LBJ has averaged four percent GDP expansion. 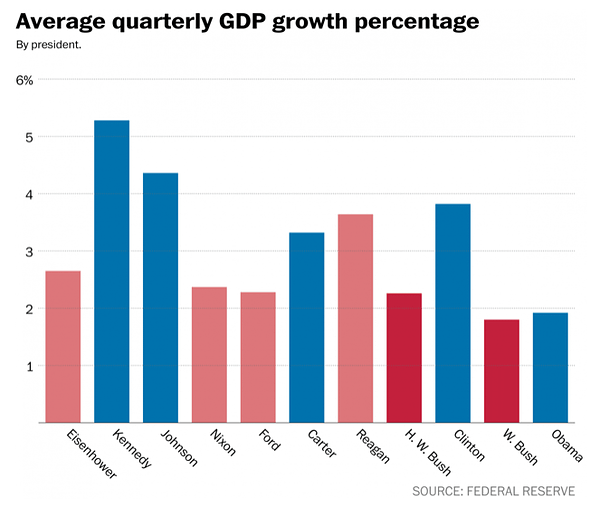 Unveiling his third tax plan in less than a year, Donald Trump last week declared, "I believe it's time to establish a national goal of reaching four percent economic growth." But he didn't stop there:

And just how much better is "substantially better?" On September 28, 2015, Trump provided an answer. As the Wall Street Journal reported:

Donald Trump boasted Monday that his newly unveiled tax plan could supercharge the U.S. economy, pushing annual economic growth as high as 6%, as he upped the ante with Republican presidential rivals over the growth benefits from their competing proposals...
Asked about the economic growth he expected his plan to generate, Mr. Trump responded: "We are looking at a 3% but we think it could be 5 [percent] or even 6 [percent]. We are going to have growth that will be tremendous."

That kind of growth would be tremendous. But Trump's scheme is ridiculous for the same reason Jeb Bush's "Four Percent Fraud" was as well. As I noted when Jeb promised four percent annual growth because "it's a nice round number":

As it turns out, since Ike was in the White House only two presidents--Democrats John F. Kennedy and Lyndon Johnson--averaged at least 4 percent GDP growth over their tenures. And no President named Bush ever reached that mark even once in 12 years...
After all, four percent GDP growth isn't just higher than the post-World II U.S. average; it is a figure that has been reached only 27 times in that period. And in that span, two of the worst performers in the White House were Jeb's father and brother.

Since 2000, GDP growth has averaged a little less than 2 percent a year. Since the Great Recession of 2008 hit, labor productivity has expanded by less than 1 percent a year. As Neil Irwin explained in the New York Times last week, that means Trump can't get there from here. Our aging population and his planned crackdown on immigration mean a return to the boom days of 1950 to 1973 simply isn't in the cards:

Add it all up, and is Mr. Trump's promise of 25 million new jobs over the next decade and 3.5 percent annual economic growth possible? Only if a burst of innovation arrives that makes every worker's labor go further, and if millions of new immigrants arrive from overseas or the ratio of American adults who want to work rises far higher than it has ever been. Absent all that, the math just doesn't work.

Unencumbered by either truth or history, Donald Trump made a vow about his economic blueprint to his audience last week:

[It] will be completely paid for in combination with proposed budget savings. It will be deficit neutral. If we reach four percent growth, it will reduce the deficit, it will be accomplished through a complete overhaul of our tax regulatory, energy and trade policies.

Of course, Trump's gambit is far from deficit neutral. His massive tax cuts for the rich and added spending will produce a hemorrhage of red ink, adding up to $6 trillion of new debt over the next decade according to estimates from the conservative Tax Foundation and the Committee for a Responsible Federal Budget.
Undaunted, the man whose companies declared bankruptcy four times and who brought you Trump Airways, Trump University and Trump Mortgage says, "Believe me."

"You can visit our web site, just look at the math. It works."