Trump Resistance is Similar to Tea Party, But with Truth on its Side 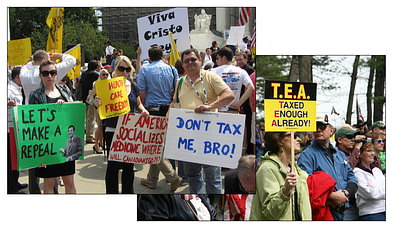 On Feb. 8, 2009, CNBC talking head Rick Santelli helped launched the tea party movement with an epic rant on the floor of the Chicago Mercantile Exchange. But eight years later, as Republicans are now learning the hard way, the tea bag is on the other cheek.
The signs of sizable, sustained, and seriously angry opposition to President Trump and the Republican agenda are everywhere. Trump's first weekend was marked by the Women's March that brought more than 3 million Americans to streets of cities and towns in states red and blue. His disturbing and dangerous executive order on immigration and travel was met with thousands of protesters in airports across the country, while an army of lawyers mobilized to protect visa holders and legal U.S. residents from Trump's draconian Muslim ban. Meanwhile, massive crowds are greeting GOP Congress members at town hall meetings and public events back in their districts, causing abortion-restricting, Obamacare-repealing, Medicare-privatizing, and climate change-denying hardliners to flee from their own constituents.
All in all, the effect is precisely what the organizers of the Indivisible movement sought to create. Those Democratic congressional staffers who suffered through the tea party onslaught of 2009 and 2010 are turning the tables on their tormenters. And as Sarah Kliff reported in Vox this week, many veteran right-wing foot soldiers from the halcyon days of the tea party are grudgingly acknowledging the turnaround:

"Eight years ago we were in the same boat," says Dean Clancy, who previously ran policy for Freedom Works, a Tea Party-affiliated group that advocated against the health care law. "We were stunned, angry, fearful, besieged, paranoid, but we were also liberated. The feeling was wonderful, like you're the rebels in Star Wars"...
Clancy, the Tea Party activist, sees the appeal of the moment for liberals. "There's nothing more American than protest, and few things more enjoyable," he says. "I suspect Trump must appear to them as Obama appeared to us, as a threat to everything we believe and cherish. You have to respect them for resisting that."

But you have to respect the liberal activists and progressive protesters of 2017 for something else: They have the truth on their side.
Continue reading at Daily Kos.