U.S. Conservatives Get It All Wrong on Obama's Brexit "Hypocrisy" 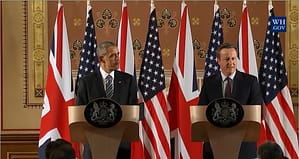 President Obama's forceful statements in support of the UK remaining in the European Union made waves on both sides of the Atlantic. Brexit leader and London Mayor Boris Johnson protested Obama's "hypocrisy" on an issue of UK sovereignty, attributing Obama's firm position to the "part-Kenyan President's ancestral dislike of the British empire." But here in the U.S., the conservatives from whom Johnson appropriated his Birther talking point regurgitated their own misguided sound bite. As Larry O'Connor of Hot Air put it:

I remember it quite well. And what I remember is this: Whereas Barack Obama voiced his strong support for the position of Prime David Cameron's government in London, Republicans brought Benjamin Netanyahu to Congress specifically to torpedo the Iran policy of the current President of the United States. As I put it in March 2015:

In less than a week, Congressional Republicans have taken two unprecedented steps to undermine the foreign policy of a sitting American president. Last Tuesday, they offered Capitol Hill as a global stage to a foreign leader--Prime Minister Benjamin Netanyahu of Israel--to sabotage the U.S.-led nuclear talks with Iran. And this weekend, 47 GOP Senators sent a letter to the leadership in Tehran warning the Islamic Republic that Congress-or the next president--could blow up any nuclear deal at any time.

It's no wonder that White House press secretary John Earnest described the GOP's poison pen letter as "the continuation of a partisan strategy to undermine the president's authority."
The reliably Republican Hot Air conveniently ignored all of that history and the context. When O'Connor criticized Obama's for agreeing with CNN's Fareed Zakaria suggestion that "Prime Minister Netanyahu has injected himself forcefully into this debate on American foreign policy in Washington," he made no mention of Bibi's partisan abettors:

During the height of the debate over Obama's disastrous nuclear capitulation to Iran, Israeli Prime Minister Benjamin Netanyahu accepted an invitation to address the US Congress to make a strong case against the deal that could hand nuclear weapons to a terrorist state pledged to annihilating his nation.
Do you remember the White House's petulant reaction to the speech?...
No matter what side of the Brexit question you fall on, there's no doubt that Obama is "injecting himself forcefully into the debate" over British policy, right? And by doing so, he is showing himself to be a world-class hypocrite.

Sadly, no. President Obama as the U.S. head of government traveled to London in support of Tory David Cameron, the UK head of state. Obama's talk may have been unusually blunt, but it was delivered to assist, not undermine, 10 Downing Street. (It should be noted that the President was also providing air cover to American businesses, who strongly back the UK remaining in the EU.) As Politico reported four days ago:

The president's decision to effectively stump for Cameron came after a direct intervention from the prime minister last year, according to a source familiar with Cameron's thinking.
Rattled by tighter-than-expected poll numbers, Cameron asked Obama to make the trip during the referendum campaign rather than wait until July when the president was also scheduled to be in Europe.

For their part, the British people apparently think Obama may have overstepped his bounds. Nevertheless, Obama still enjoys stratospherically-high positive approval ratings in the UK. And based on the changes in the betting markets, the President appears to be succeeding in his effort to help Cameron's EU "remain" campaign. As for the saboteur Netanyahu and his allies within the United States, not so much.