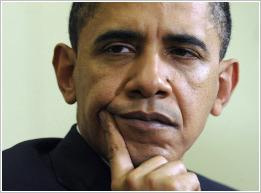 The dictionary describes the "Stockholm Syndrome" as "the psychological tendency of a hostage to bond with, identify with, or sympathize with his or her captor." By that definition, then, Barack Obama has been in its grip from the moment he took the oath of office. On the economic recovery, health care, reform of the financial system and so much more, President Obama has let his agenda become captive both to a Republican Party determined to destroy him and his own quixotic search for bipartisanship already killed off by the GOP's unprecedented obstructionism.
Which makes the biggest question for Wednesday's State of the Union address simply this: will Barack Obama free himself of the fantasy that is ruining his presidency?
The early indicators are mixed.
After testing the waters earlier this wee with Clinton-style "small ball" initiatives aimed at the middle class, President Obama reportedly with ask Congress for a badly needed second stimulus bill to jumpstart the sluggish recovery and catatonic job market. With the Democrats' already watered down health care effort imperiled by the Republican Senate victory in Massachusetts and unending GOP intransigence, Obama will call for Democratic unity in pursuit of a commitment to "comprehensive" reform. Rumor also has it that President Obama will finally push for the repeal of the disgraceful "Don't Ask, Don't Tell" policy towards gay Americans in the United States military.
But those hopeful signs are countered by Obama's ill-timed, ill-conceived and transparently cynical call for a spending freeze covering $477 billion in domestic spending. Combined with an executive order calling for the creation of a deficit commission, President Obama's premature paean to deficit reduction is bad politics and even worse policy, one that will be nevertheless be rejected by the very Republicans who tripled the national debt during Ronald Reagan's tenure and doubled it again under George W. Bush.
While the New York Times announced that the President will acknowledge "mistakes" in his first year, the Washington Post reported that Obama will "address GOP critics directly in State of the Union speech."

Obama will ask Republicans to "change course" and "work together to face the big challenges," the official said, adding that the president's tone will not be markedly different than it has been in the past.

Of course, it never had to be this way.
Beginning with the stimulus package, Barack Obama offered Republicans a hand up before they were on their knees. Last year, Obama bent over backwards to accommodate the GOP on the $787 billion American Recovery and Reinvestment Act (ARRA), producing a package not only much smaller than the $1.2 trillion some of his own advisors insisted was required, but weighed down with tax cuts demanded by Republicans. For his near-compulsive bipartisanship, Barack Obama like Bill Clinton before him was rewarded with exactly zero GOP votes in the House. (As Paul Krugman warned a year ago, "Look, Republicans are not going to come on board. Make 40% of the package tax cuts, they'll demand 100%.") Worse still, polls reveal that Americans view a program as wasteful, even as the overwhelming consensus of economists agrees that ARRA added up to four percentage points to annual gross domestic product and saved up to two million jobs.
On health care, too, President Obama was his own worst enemy. Refusing to commit his prestige and political capital to a course of reform he demanded, Obama left his fate to Democrats in Congress and Republican mythmakers determined to vilify him. As with the stimulus, he lost control of both the policy and the message to the great detriment of his political fortunes and the American people alike.
But during tonight's State of the Union speech, Barack Obama may have a second - and surely last chance - to fight the scorched earth politics of Republican obstructionism which are strangling his presidency.
Will Barack Obama liberate himself tonight from the dangerous fetish for bipartisanship that is a Stockholm Syndrome of his own making? Or will he just use this second chance to make the same mistake twice?