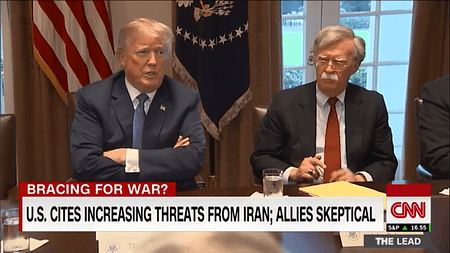 The United States was the world's lone "hyperpower" when President George W. Bush launched his disastrous and unnecessary war with Iraq in 2003. An economic and military hegemon unchallenged by any single enemy or collection of rivals, the U.S. could and did act with impunity in swiftly toppling Saddam Hussein's regime in Baghdad.
But even as Bush stood in front of a "Mission Accomplished" banner to declare "major combat operations in Iraq have ended" and "the United States and our allies have prevailed," the first signs of his world-historical mistake were becoming clear. Within weeks of the American tanks rumbling over the Kuwaiti border to destroy Saddam's Sunni dictatorship, the U.S. uncorked a festering sectarian conflict and assured the new Shiite majority-dominated Iraq would be tightly aligned with Tehran. A war fought on the cheap ended up costing 5,000 American lives, 40,000 more wounded, and trillions of dollars. The arrogant calls for regime change and preventive war were exposed as catastrophic ideas whose time had never come. It was bad enough that al-Qaida decided it was "better to fight us there than here"; by 2007 the organization had begun its transformation into the ISIS plague that continues to evolve across the Middle East and Asia. The region has been unstable ever since.
Now, 16 years later, President Donald Trump and his inner circle seem to be traveling down the same path toward conflict with Iran.
But this needless war with Tehran wouldn't merely be a cataclysm on a far grander scale for the American people. It would arrive at a tipping point in world history. America's post-Cold War "unipolar moment" is over. In relative terms, the global balance of power is shifting away from the United States toward China. In nominal terms, Chinese GDP has already surpassed the U.S. Beijing is determined to become a player in aerospace and a world leader in renewable energy, quantum computing, and artificial intelligence. America's qualitative military edge is rapidly narrowing as Chinese and Russian advances in space, cyberwar, stealth technology, smart munitions, and nuclear weaponry mean the U.S. "Age of Impunity" is over, too. For the foreseeable future, no nation will impact American national security and prosperity more than China.
A "normal" U.S. president of either party would respond to these tectonic changes by making China foreign policy job No. 1. No priority comes to close to managing the growing American competition with China. The resurgent threat from Russia must be contained. A nuclear North Korea must be deterred. The pace of global climate change must be dramatically slowed, and its inescapable consequences addressed. The fight against non-state terrorism from ISIS, al-Qaida, and trans-national criminal gangs must continue. And to achieve all of this, the United States must bolster its alliances, strengthen international institutions, and deepen its trading partnerships.
Unfortunately, "Wrong-Way Trump" is choosing the opposite course at every turn, especially when it comes to the rapidly deteriorating situation with Tehran.
Continue reading at Daily Kos.