Your Tax Dollars at Work 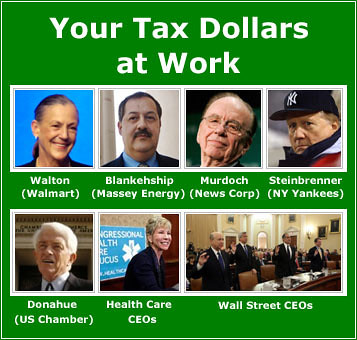 On Friday, the House approved the $801 billion "compromise" tax bill, sending it on to the White House for President Obama's signature. Over the next two years, that budget-busting, gilded class giveaway will cost the Treasury $70 billion in revenue lost from the top 2% of taxpayers and another $25 billion uncollected from the richest estates in America. But sooner or later (sooner, if born-again deficit hawks get their way), that bill come due and it will be paid by everyone else. In the meantime, here's a picture of your tax dollars at work - for the rich and famous.
For openers, it's worth noting who will not benefit from the extension of the top Bush income tax rate and the gutting of the estate tax. Certainly not small business owners. Now-abandoned Democratic proposals to end the Bush tax cuts for families earning over $250,000 a year affected only 2% of all households, and an even smaller fraction of small businesses. (The Republican claim that Democrats want to "raise taxes on roughly half of small business income in America" is contingent on Bechtel, Coors, PriceWaterhouseCoopers and other multinational "S corporation" being categorized as small businesses.)
And from the beginning, the winners of the successful Republican crusade against the estate would never included family farmers. As incoming Speaker John Boehner put it in 2009:

"People who aren't wealthy, who may have built up value in land over generations and many family farms find themselves in situations where they've got to sell the farm in order the pay the taxes."

Unfortunately, that claim is just as false today as when George W. Bush uttered it during and after the 2000 presidential campaign. Now as in 2001, Republicans wrongly claimed that the estate tax led to the loss of family farms. When President Bush blasted opponents who say "the death tax doesn't cause people to sell their farms" with a mocking "don't know who they're talking to in Iowa," neither Hawkeye State farmers nor researchers could name one. As David Cay Johnston, among the nation's leading journalists when it comes to tax issues, conclude in the New York Times nine years ago:

The future looks no different. In 2009, the Center on Budget and Policy Priorities (CBPP) estimated that only 1 in 500 estates (0.24%) was impacted by the $3.5 million per person threshold and 45% tax rate House Democrats sought to continue. And last year, the Tax Policy Center quantified just how few family farms or small businesses are actually impacted by the estate tax proposals under consideration, including the $5 million exemption and 35% rate advocated by Blanche Lincoln (D-AR) and Jon Kyl (R-AZ) and now to be signed into law by President Obama:

But thanks to the new tax bill, one family-owned business - Walmart - could reap a multi-billion dollar bonanza.
As Vermont Senator Bernie Sanders explained in his filibuster Friday, the elimination of the estate tax could save the Walton family alone $32.7 billion. (Already, the one-year lapse of the levy allowed the estates of George Steinbrenner and Texas billionaire Dan Duncan to escape taxes altogether in 2010.) But as the Arkansas Times pointed out, today's vote ensures Sam Walton's clan will keep billions out of the hands of Uncle Sam:

That victory isn't the first - and won't be the last - for the Walton family and its campaign to shield its roughly $90 billion fortune. As USA Today reported back in 2005:

Led by Sam Walton's only daughter, Alice, the family spent $3.2 million on lobbying, conservative causes and candidates for last year's federal elections. That's more than double what it spent in the previous two elections combined, public documents show.
The Waltons have joined a coterie of wealthy families trying to save fortunes through permanent repeal of the estate tax, government watchdogs say. The election of President Bush and more conservatives to Congress gave momentum to the long-fought effort. The Waltons add more.

And speaking of more, the big winners in today's tax cut windfall for the wealthy also reside exactly where you'd expect: on Wall Street and in the gatherings of the U.S. Chamber of Commerce. As the New York Times reported three weeks ago:

Two years after the onset of the financial crisis, the stock market is recovering and Wall Street's moneyed elite are breathing easier again. And this means in some cases they are spending again -- at times cautiously, but sometimes with a familiar swagger.

As it turns out, the U.S. Chamber of Commerce didn't merely coordinate with Wall Street to battle President Obama on health care reform, regulation of the financial industry and so much else. It fought to ensure another Treasury draining payday for its members.
In November, a study by Citizens for Tax Justice and Chamber Watch revealed just some of the beneficiaries of the GOP's $700 billion, ten-year haul for the upper class. Its report followed the money:

Rupert Murdoch, the CEO of News Corporation, whose donation of $1 million to the U.S. Chamber of Commerce led to well-publicized shareholder outrage, would pocket more than $1.3 million.
Don Blankenship, a former U.S. Chamber Board member and the CEO of Massey Energy, whose company owned the mine in which twenty-nine miners died in April 2010's mining disaster, the worst in forty years, would take home more than $700,000.
David Cote, the CEO of Honeywell and a member of the National Fiscal Commission, who keynoted an address to the National Chamber Foundation expressing concern about the national debt over the next ten years, would get a tax cut of over $1.2 million.
CEOs of big banks on Wall Street, who helped collapse the economy and then used the U.S. Chamber to fight stronger financial regulations, stand to reap between $700,000 and $1.6 million each.
The CEOs of the health insurance industry, whose industry saw an overall increase in profits this year even while they slashed benefits and instituted breathtaking premium increases, are looking to personally benefit from another hit on the middle class by taking in between $335,000 and $875,000.
U.S. Chamber President and CEO, Thomas Donohue, who has shifted the Chamber's mission from serving mainstream business to serving the interests of the CEOs whose corporations write the biggest checks, will personally gain over $200,000.

Now, President Obama is on the verge of kowtowing to GOP leaders who would, as Paul Krugman explained, " cut checks averaging $3 million each to the richest 120,000 people in the country."
At a time of two wars, massive budget deficits and record income inequality, that is your tax dollars at work.