A funny thing has happened on America's way to health care reform. As Republicans promise a "holy war" to block supposed "government-run" health care that would "break the bank", Democrats in the House and the Senate offered reform plans that would cover all almost Americans, plans which pay for themselves. As it turns out, that's a far cry from the GOP's deeply flawed 2003 Medicare prescription drug benefit, an unfunded act of transparent pandering to elderly voters which saddled the Treasury with hundreds of billions of dollars of red ink. 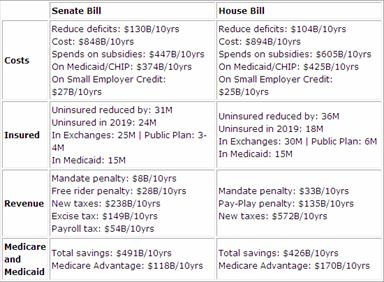 ThinkProgress has a helpful table (above) comparing the House and Senate bills, including the number of additional Americans each would cover (36 million vs. 31 million), their price tags ($894 billion vs. $848 billion over 10 years), their deficit impact ($104 billion vs. $130 billion cut over 10 years) and more. Importantly, each program is fully funded and reduces the future deficit through a combination of Medicare savings and a range of excise, payroll and income taxes. (The House bill relies heavily on an income tax surcharge on the wealthiest Americans, while the Senate revenue mix includes levies on so-called "Cadillac" employer health care plans.)
Looking at the Senate version, the Washington Post's Ezra Klein believes the Democrats' deficit discipline and bending of the cost curve is an impressive feat:

One actual surprise is that the Senate bill doesn't just pay for itself. It balances itself out. That is to say, the bill is not deficit neutral because it costs a billion dollars and then the government raises a billion more dollars in taxes. In that scenario, the government is spending more, but paying for it. Rather, "CBO expects that, during the decade following the 10-year budget window, the increases and decreases in the federal budgetary commitment to health care stemming from this legislation would roughly balance out, so that there would be no significant change in that commitment."
In the first 10 years, in other words, the bill improves the deficit a bit, but the government is spending $160 billion more on health care than it otherwise would have. In the second decade, however, that ends: The savings from Medicare and Medicaid, paired with the excise tax (which CBO says "is effectively a reduction in the existing tax expenditure for health insurance premiums") and a handful of other changes, leaves the government spending no more on health care than it otherwise planned to. That's impressive stuff given that some 94 percent of the country has health insurance. And it implies, of course, that in the third decade, the federal commitment actually goes down relative to expectations. The curve, as they say, is bent.

The contrast with the Republicans' cynical 2003 Medicare Modernization Act couldn't more stark. Passed in the House by an identical 220-215 margin as the Democrats' HCR last week, the GOP's $395 billion/10 year Medicare Part D program was completely unfunded. Of course, it wasn't $395 billion, either. The Bush administration threatened to fire Medicare actuary Richard Foster if he informed Congress of his estimated price tag of $534 billion. By 2005, the forecasted cost of the drug benefit rose to $720 billion.) While the rise of generic drugs among other factors has lowered that figure, the GOP's prohibition of government direct negotiation of Medicare drug prices with pharmaceutical firms ensured a heavier burden for beneficiaries and taxpayers alike.
The role reversal between 2003 and 2009 is stunning. The Republicans didn't just lose the White House and Congress, but any remaining credibility on budgetary matters as well.
Back then, Bill Thomas (R-CA), the legislation's architect, sounded a refrain that Democrats would repeat this week:

"If we are trying to destroy Medicare, why is the AARP supporting us?''

While only one of 177 Republicans supported the House health care reform bill, six years ago 204 House Republicans voted yea on the Medicare prescription bill. Among them were current GOP leaders John Boehner (R-OH) and Eric Cantor (R-VA).
And to be sure, the Republican position then as now wasn't about preserving conservative principles, but instead a GOP majority at all costs. As House Majority Leader Tom Delay defended his party's fiscal recklessness that November night:

"We must forget about ideological absolutes."

The born again deficit virgins of the GOP can also forget their claim to be the Party of Fiscal Discipline. The saga of the Medicare drug bill in 2003 only confirmed what Vice President Dick Cheney proclaimed the previous year, "Reagan proved deficits don't matter."
Not, that is, unless Democrats are in power.