A Brief History of the 2020 Presidential Election 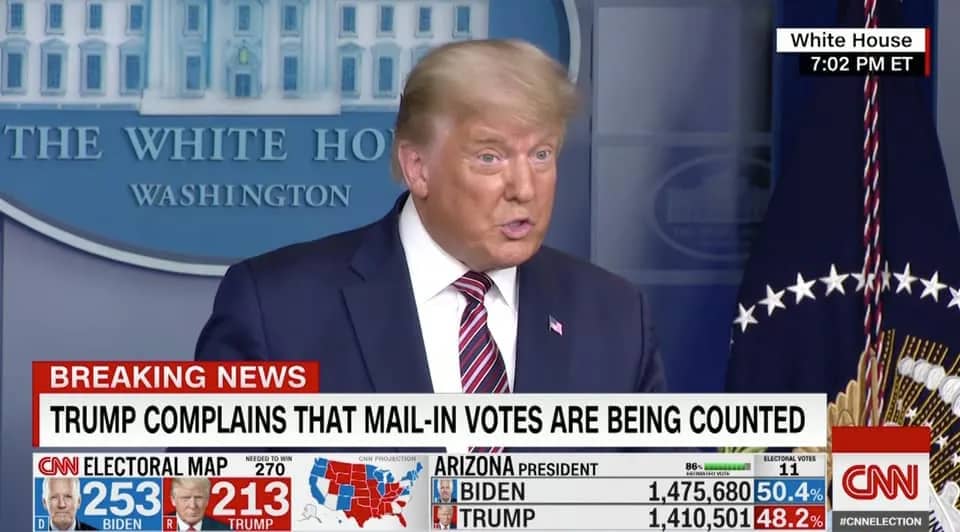 DEMOCRATS: Coronavirus is coming to the USA. We have to prepare the country for the pandemic and massively mobilize national resources for hospitalizations, testing, tracing and isolation.

REPUBLICANS: The Wuhan flu? Like a miracle it will disappear. Besides, you can’t infringe on my liberties.

DEMOCRATS: But hundreds of thousands of Americans will die—

REPUBLICANS: You do you, snowflake!

DEMOCRATS: Well, at least we’ve got to take steps to protect voters and polling place workers during the election.

REPUBLICANS: No problem! We’ll just reduce the number of polling places, limit the days and hours of early voting and require a photo ID to submit a ballot. To be even more helpful, we’ll purge millions of registered voters, like the 300,000 we terminated in Georgia.

DEMOCRATS: How about we protect voters—especially the elderly who typically vote Republican—by adopting vote by mail?

REPUBLICANS: No! That will lead to rampant vote fraud.

DEMOCRATS: No, it won’t. For decades, states like Oregon and Washington have voted exclusively by mail. Voters can mail in their ballots or drop them off in person. It’s extremely secure, virtually fraud-free, consistently produces higher turnout and enjoys broad bipartisan support.

REPUBLICANS: Oregon and Washington? Those socialists are too high all the time to understand reality.

DEMOCRATS: You believe climate change is a hoax...

REPUBLICANS: That’s right, hippie. Tell you what, we’ll allow vote by mail. But we’re going to tell our people to show up in person.

DEMOCRATS: Ok. You do you.

REPUBLICANS: We will. And we think states like Pennsylvania and Georgia should count mail-in votes only after all other ballots haves been tabulated. If Ohio and Florida want to begin counting mail-in ballots right away on Election Night, that’s fine.

REPUBLICANS: Hey, Communists! Check out the returns. We’re kicking your ass in Michigan, Wisconsin and Pennsylvania! And you thought you were going to win Florida and Ohio, but got swamped by the “Red Wave.” MAGA!

DEMOCRATS: We’ll, it’s still early. There are a lot of votes left in a bunch of states. Biden could still catch Trump.

REPUBLICANS: I’m sorry, could you say that again? I couldn’t hear you over the sound of the waterfall of your liberal tears. Four more years!!!

DEMOCRATS: Check it out! We won Wisconsin and Michigan. And Biden is cutting Trump’s lead in Georgia and Pennsylvania.

REPUBLICANS: No, that’s fraud! The corrupt Democrat machines in Philadelphia, Las Vegas, Phoenix and Atlanta are stealing the election from Donald Trump. This is a coup!

DEMOCRATS: But Georgia and Arizona are run by Republicans—

REPUBLICANS: We must stop the deep state cabal led by George $oros. All patriots should exercise their First Amendment right of free speech by showing up at the vote counting centers with their guns protected by the Second Amendment!

DEMOCRATS: What are you talking about? The vote counting is proceeding exactly the way we explained before the election. Trump came back and won Ohio because they counted mail-in ballots first. He’s losing Pennsylvania because they’re counting mail-in ballots last, just the way you wanted!

REPUBLICANS: Well then, Karl Marx, how do explain three-quarters of those votes in Pennsylvania magically going for Biden?

DEMOCRATS: For the love of the little baby Jesus, you told your people NOT to vote by mail!

REPUBLICANS: Don’t speak of our Savior like that, blasphemer!

REPUBLICANS: Save your apologies for that dictator, Joe Biden.

REPUBLICANS: Four years? F**k that. The tree of Liberty midst be refreshed from time to time with the blood of tyrants and Patriots!